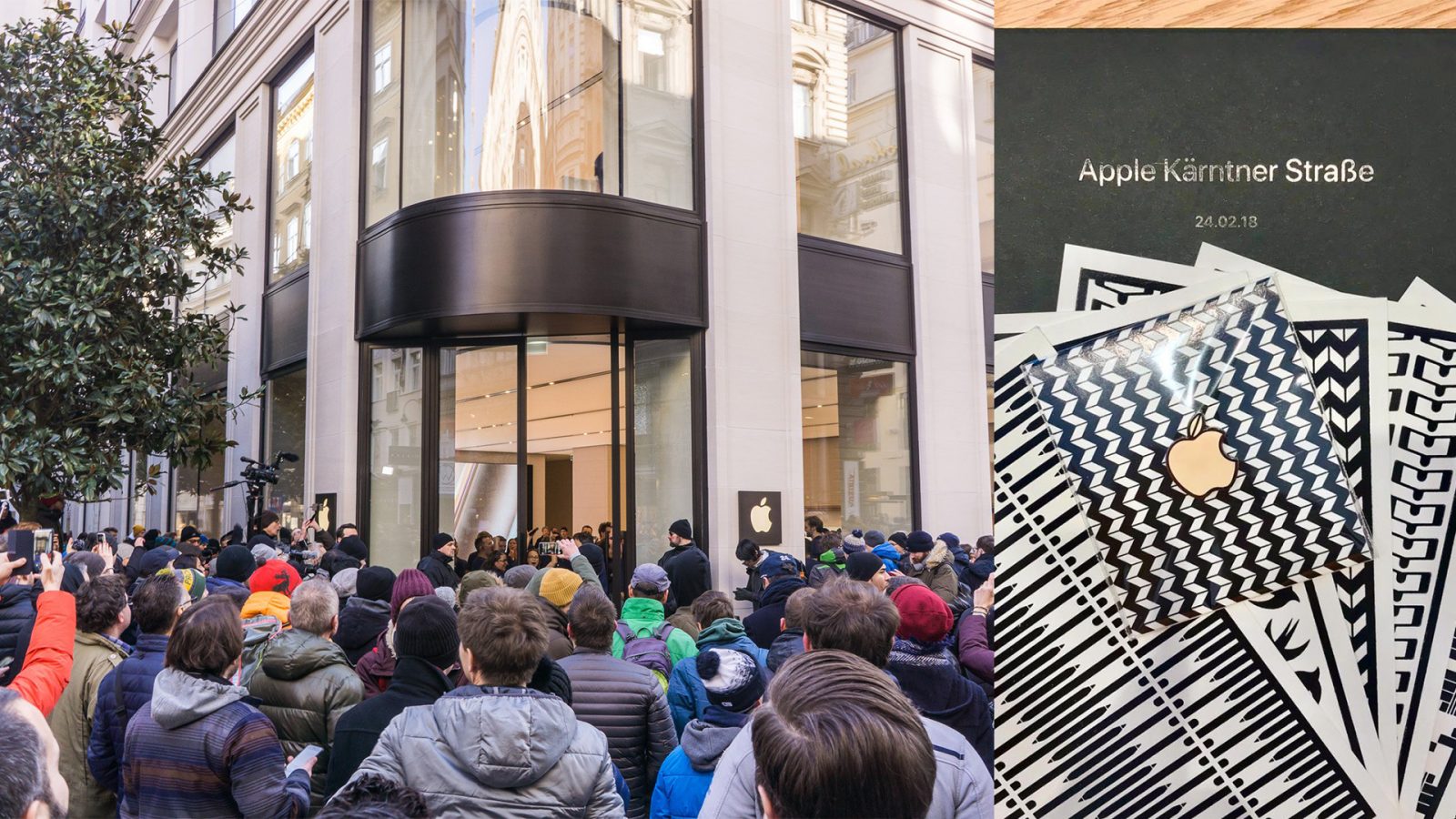 This morning on the historic Kärntner Straße, Apple welcomed customers in Austria’s capital of Vienna for the first time, opening a new retail location in a historically significant storefront after over a year of planning and restoration work.

On February 1st, the grand opening date of Apple Kärntner Straße was announced when the company removed construction scaffolding surrounding the building and replaced it with banners referencing The Wiener Werkstätte. The announcement capped a project that has been in the works since at least August 2016, when plans for the store were first made public. Along the way, we brought you photos of the building under construction.

Apple fans and customers who lined up ahead of the store’s opening have been posting photos and videos to Twitter showing the crowds present outside and the store preparations inside. Unlike the majority of Apple’s retail locations in the U.S., Apple Kärntner Straße is housed in a historically significant structure dating back to the 1800s. We previously detailed the store’s architecture and Apple’s efforts to restore the space formerly occupied by the fashion brand Esprit.

Some of the first customers to enter the store this morning received commemorative Apple cards and an enamel pin styled in the same theme as the video wall animation inside and previous window coverings outside. This is a break from tradition for Apple, since t-shirts are typically given out at new store opens.

This past Thursday, the store’s window coverings fell and local media was given a preview of the space that 150 employees speaking 44 languages will occupy. Two of the structure’s floors are public areas reserved for product displays and support, the second of which offers views of the shopping district below through a curved corner window. Detailed photos posted by Storeteller and Hypertronium offer views into the store’s private boardroom, not normally accessible to the public.

Apple is even announcing their store arrival with a new story in the Austrian App Store:

Today’s celebration brings Apple’s total retail store count to 501. In January, the company opened store number 500, Apple Garosugil, just ahead of the Winter Olympic Games. The opening marked the company’s first location in South Korea. Ahead of today’s opening in Vienna, Angela Ahrendts stopped by to talk to store employees:

It was such an honor to meet Angela Ahrendts today.. I'm beyond amazed by her presence, her aura and the way she inspires everyone gosh.. ❤ TOMORROW'S GONNA BE A BIG DAY pic.twitter.com/CK511K49i0

Elsewhere in the world, Apple is gearing up for new and equally noteworthy flagship stores in several countries. Paris will soon welcome Apple to the famous Champs-Élysées shopping district, and construction is wrapping up on an underground store in Milan’s Piazza Liberty. Washington D.C.’s former Carnegie Library has been in the process of being restored into a public gathering space since late last year, and will soon house one of Apple’s most impressive town squares in the U.S. In Australia, passionate controversy continues between residents and local government over Apple’s plans to build a store in Federation Square.

You can read more about Apple’s store plans for 2018 and beyond in our Apple Retail guide.