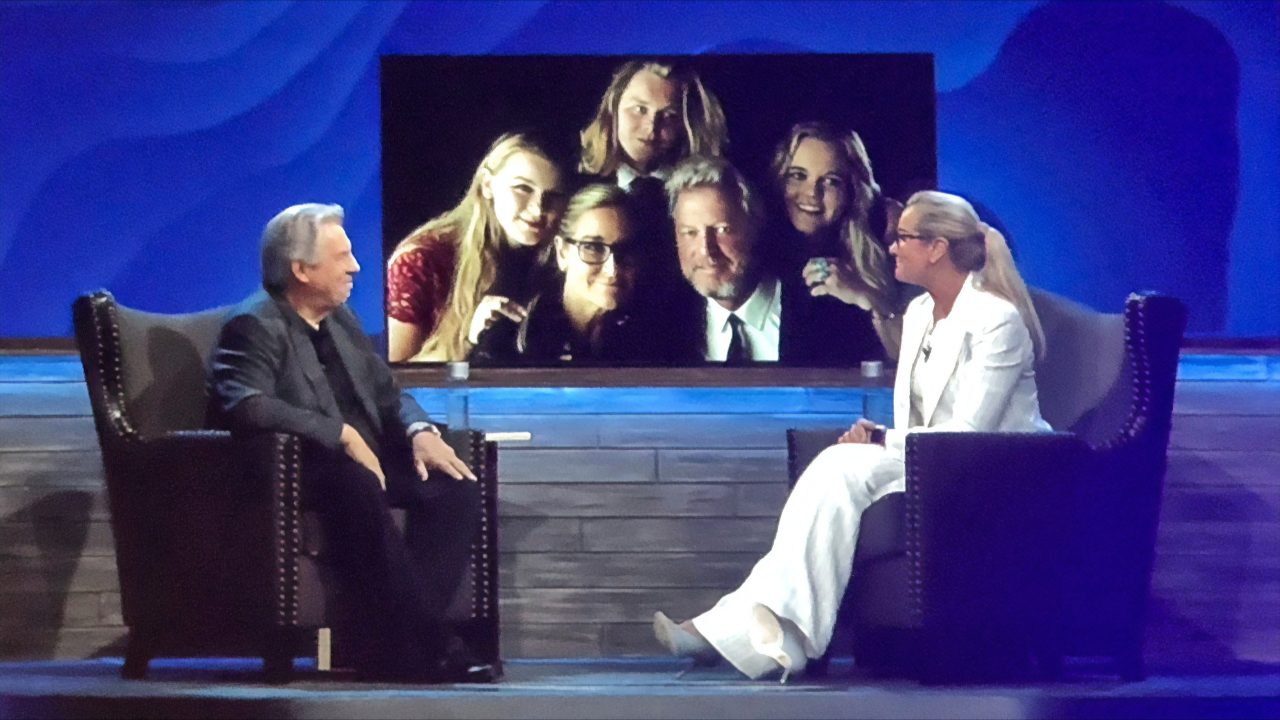 Today at the 2018 Global Leadership Summit in South Barrington, Illinois, Apple’s SVP of Retail Angela Ahrendts spoke about her leadership journey during an interview with author and coach John Maxwell.

Broadcast to 125,000 individuals both on-site and across host locations, at one of which 9to5Mac attended, the wide-ranging interview shed light on Ahrendts’s leadership strategy, Apple’s goal of enriching lives, and the challenges of building a timeless brand.

Maxwell began by asking about proven leadership practices. Angela explained that her midwestern core values have greatly influenced the way she leads both at Apple and all throughout her career. Ahrendts grew up in New Palestine, Indiana before attending Ball State University.

“I was raised ‘love one another as I have loved you,’” Ahrendts noted. “You carry that with you. [Your values] are the foundation of everything you are. You hire that way, you fire that way. I have always been a purpose driven human. I don’t like the word ‘work.’ I want to make an impact, I want to make a difference. How do you unite people around that higher purpose? At Apple, Tim calls it our North Star.”

Expanding on the importance of humility and remembering your roots, Ahrendts added, “The other value I was raised with was ‘whatever you give, you get tenfold in return.’ The higher up you go, the more people forget that. I’ve always said the higher up I go, the more that I need to never forget, the more I need to connect and over-communicate.”

Since joining Apple in 2014, the company has added over 80 new retail stores to its portfolio and embarked on the ambitious plan to turn stores into gathering places. Apple stores now host over 250,000 Today at Apple sessions per quarter. Ahrendts discussed how she handles the pressure of an increasingly demanding role:

“It’s stressful. You take a deep breath and say, ‘I’m here for a reason.’ There’s the day-to-day stresses of the budget meetings, the board meetings, all of the things all of us have to do. I tend to give myself an extra hour in the morning for a cup of coffee, and do my morning reading, and to listen to the Dr. Charles Stanley podcast that I’ve listened to since they came out. And when I do that, it puts everything in perspective.”

“A lot of people workout in the morning, a lot of people have different routines. I have a very deep mental and spiritual routine that I go through every single morning and I feel like I can shine my light better then.” 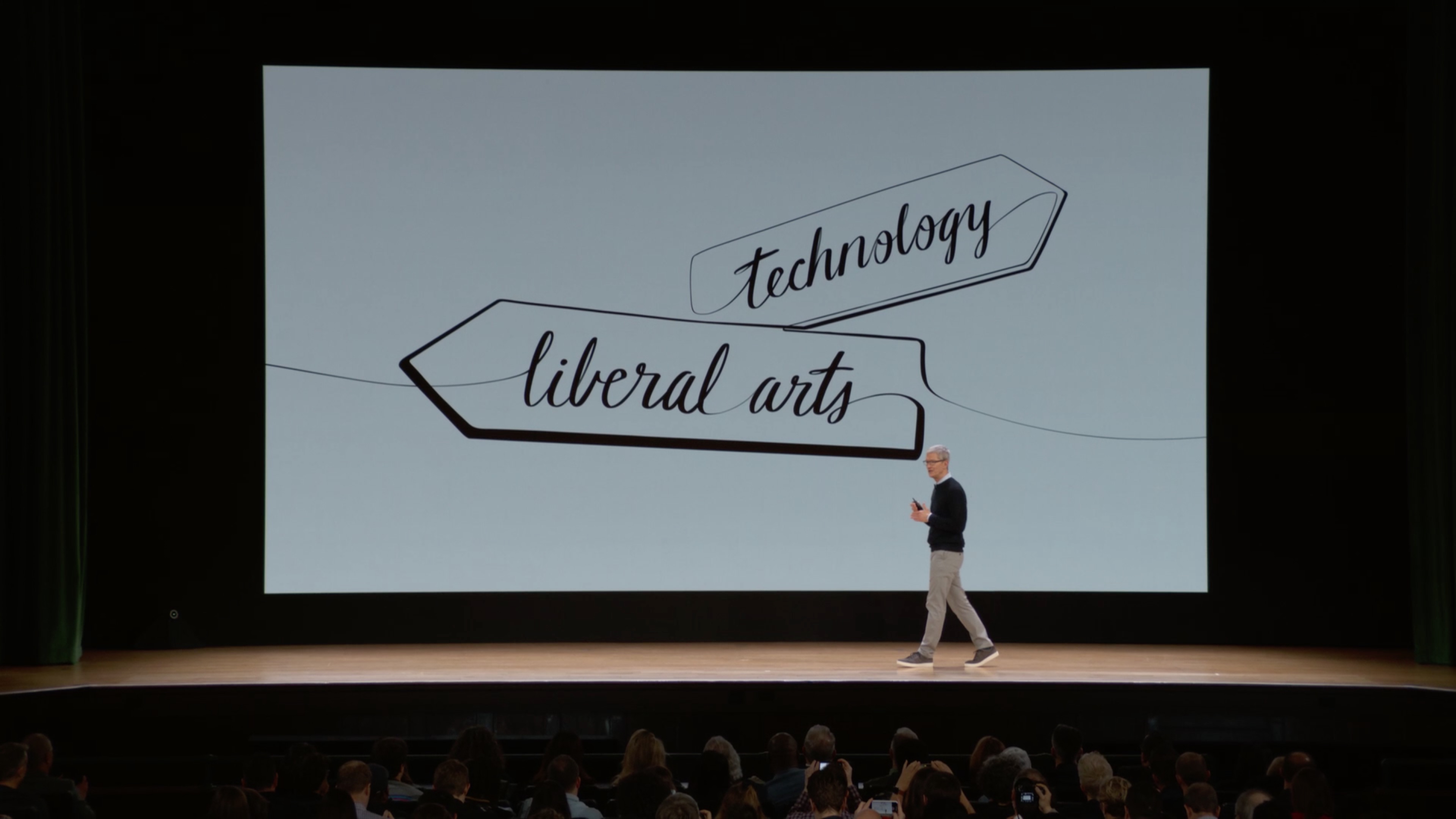 Ahrendts expressed her fondness for Apple’s metaphor of the intersection of technology and liberal arts.

Apple retail now boasts over 66,000 employees across 36 countries. Ahrendts described how she came to understand Apple’s company culture and the best ways to communicate with such a large team:

“You go halfway around the world just listening and feeling, and then you’re like, ‘OK, maybe we have to build all of this, we have to create all of this.’ Whether we like it or not, it’s a Snapchat, instagram, YouTube, WeWork world. It just is. So what are we doing to make sure that our team members are just as mobile with all of that opportunity? How are we communicating more in sound bytes, images, videos?”

Explaining that Apple produces weekly update videos that are distributed to each store employee, Ahrendts talked about the internal retail platform called “Loop” that’s used for collecting and processing feedback:

“We put another platform in place called Loop. It’s where [employees] can share ideas with us, share ideas with each other. They can tell us what’s wrong and what we need to fix, etc. It’s a constant loop of how we can get better and better. They can talk to me on Loop and I can ask them a question.”

Maxwell asked Ahrendts about Apple’s strategy for hiring and what type of candidates make the best employee:

“I always look if people are a ‘me’ or a ‘we’ type of a person. Is it all about them, or do they talk more about what their teams have accomplished? I tend to lean into people’s emotional quotient, their emotional intelligence. We’re building teams, we’re building cultures. It’s not just about hiring great individuals, it’s about hiring people that fit into that team that you’re building.

Are they yesterday, today, or tomorrow people? We’ve all hired great visionaries who have struggled in an organization. We’ve all hired incredible historians, and they tend to fight the future. We need all of them.”

Ahrendts compared her role to a chess game, where the job of a leader is to put each team member in the right place at the right time. Referencing an earlier TED Talk titled “The Power of Human Energy,” she noted that intuition is critical.

“Intuition is the best God-given gift we have. I get aggravated that the education system teaches everything for the mind and left brain, but why can’t there be a class on intuition? We were given this gift as humans, as a species, to feel, to see. It’s taken us this far. I believe that it’s actually going to be the gift in a world of artificial intelligent and automation that humans are really going to have to go back and rely on again.”

Another topic highlighted was the immense responsibility of building and maintaining timeless brands. Prior to leading Apple retail, Ahrendts led Burberry, a storied fashion brand. Maxwell asked about the challenge of branding:

“Burberry was 150 years old when I started. That made me realize it was almost like a relay race. Imagine how many batons have been handed off along the way to the different tenures of teams that have been there. So what was our purpose while we were there?

Our job was to do everything to ensure its relevance for the next 150 years. What do we need to clean up that’s gotten cluttered and disparate? What do we need to pull in and purify, and what do we need to do to keep pace and get ahead, so that when we hand that baton off to the next generation of leaders, it’ll be as great as we could make it during that time?

Finally, Ahrendts discussed how effective leaders inspire their colleagues. Describing how she thinks about inspiring the teams at Apple, she quoted her father who said, “I can teach you anything, but I can’t teach you to care.”

“When I do the weekly videos, or when I’m out in the stores, how hard is it to look someone in the eyes and make sure they know you care? I always say, ‘You have a voice, and I want to make sure you know you’re being heard. Because I care.’ If you do care, don’t talk above them, talk to them. I was there, I started in a retail store. You never forget where you came from, you put yourself in their position. What would I want the leader saying to me? It’s caring, it authenticity, it’s connecting, it’s consistency, it’s celebrating. How hard is it to say “thank you?”

Always inspired to spend time with @simonsinek, one of today’s great global thinkers on a mission to make a positive impact.

Ahrendts is one of 15 speakers featured at this year’s Global Leadership Summit, an annual conference featuring a diverse group of leaders from an assortment of backgrounds. Other speakers in this year’s faculty include best-selling author Simon Sinek, co-founder of Life.Church Craig Groeschel, and Morgan Stanley Managing Director Carla Harris.

The summit received mixed reaction in the months and weeks leading up to today after the conference’s founder, Bill Hybels, faced accusations of sexual misconduct. Hybels later stepped down from his position at the Willow Creek Community Church.

Ahrendts last spoke publicly at Cannes Lions 2018 in June, where she discussed the future of Apple retail and what it means to “humanize technology.” You can read our roundup of comments from Cannes here, and follow along with our guide for more Apple retail news.