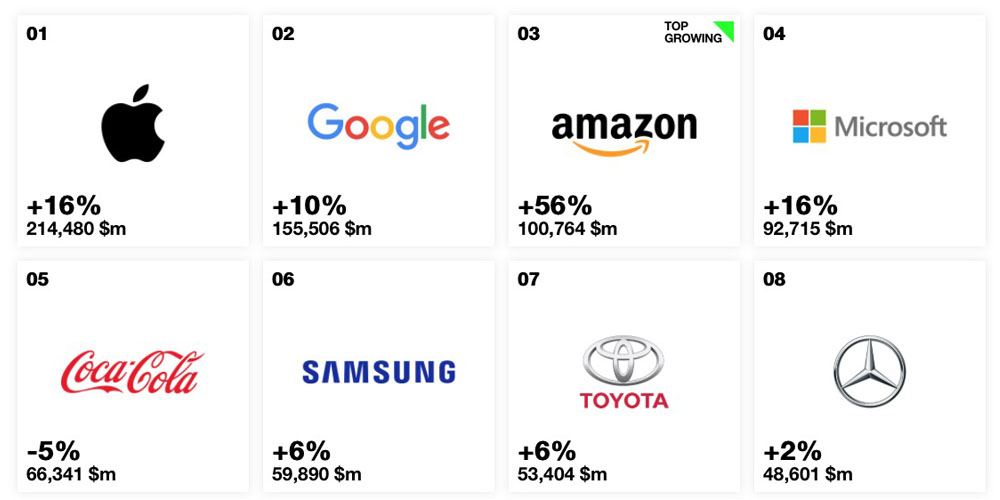 Apple has taken the top slot in the Interbrand Best Global Brands list for the sixth consecutive year. It came out ahead of Google at #2 and Amazon at #3. The rest of the top 10 was rounded out with Microsoft, Coca-Cola, Samsung, Toyota, Mercedes, Facebook and McDonalds.

Interbrand calculated that the value of Apple as a brand had grown 16% since last year, saying that three factors explained its #1 ranking …

Interbrand scores brands on ten brand strengths, each of which it says represents a ‘lever for growth.’ These are clarity, commitment, governance, responsiveness, relevance, engagement, differentiation, consistency, authenticity and presence.

It said that Apple was particularly strong in three of these areas:

Engagement is defined as the degree to which customers show ‘a deep understanding of, active participation in, and a strong sense of identification with, the brand.’ In Apple’s case, that consumers know what the brand stands for, and strongly associate themselves with those qualities.

Interbrand defines differentiation as consumer perception that the brand has a proposition and experience which sets it apart from other brands.

Finally, consistency means that it doesn’t matter how you interact with a brand – whether it’s visiting an Apple store, using an iPhone or watching a keynote presentation – you always feel that you are getting a consistent message of what the brand is about.

Interbrand then factors in the importance of the branding to the company as a whole (obviously extremely high in the case of Apple) and its financial strength.

Apple’s brand value was calculated at $214B, around a fifth of the total value of the company. In other words, if you took away all of Apple’s cash and assets so that it had to start again, the name alone would still be worth more than two hundred billion dollars.

The Interbrand Best Global Brands report highlighted Google as another consistent performer, having also held its own second-place ranking for six years straight.

Amazon was the fastest-growing brand.

It has reinvented almost every sector […] It revamped its Fire Phone to become the Amazon Echo smart speaker, Amazon MP3 to become streaming music service Amazon Music Unlimited, and its 2010 crowdsourcing platform for screenwriters into Amazon Studios’ Emmy Award–winning original TV shows. What’s more, according to Morgan Stanley, Amazon’s fashion business has become the second largest seller of apparel in the US.

Spotify was one of two new companies to enter the top 100 for the first time this year, at #92, while car company Subaru debuted at #100.

There was less good news for another car company: Tesla this year dropped out of the top 100.

You can see all 100 of the Interbrand Best Global Brands here.