Apollo for Reddit removed from App Store over push notification implementation, despite guidance from Apple 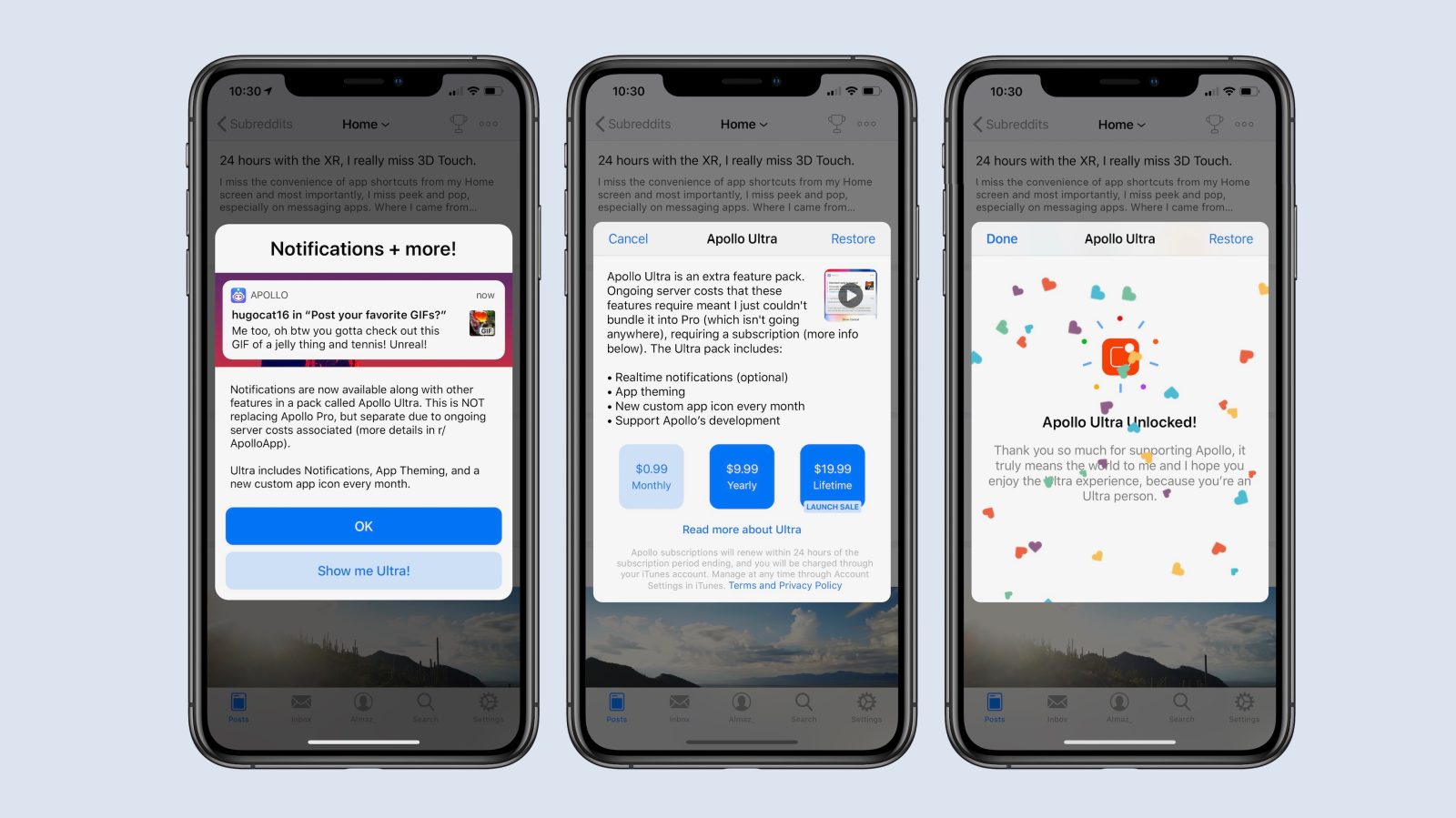 Update: Selig says Apple has corrected the error and Apollo for Reddit should soon return to the App Store.

After a feature-rich update over the weekend, Apollo for Reddit has today been removed from the App Store. Developer Christian Selig took to Reddit to explain that he received an email from the App Store Review team explaining that his app violates App Store Guidelines by offering push notifications as an in-app subscription upgrade.

In the email, the App Store Review team explains that offering an “in-app purchase auto-renewable subscription product” that provides access to “built-in Push Notification capabilities” is “not appropriate for the App Store”:

Upon re-evaluation, we found that your app is not in compliance with the App Store Review Guidelines. Specifically, we found:

Business – 3.2.2 We noticed that your in-app purchase auto-renewable subscription product provides access to built-in Push Notification capabilities, which is not appropriate for the App Store.

For this reason, your app will be removed from sale on the App Store at this time.

For those unfamiliar, Apollo for Reddit version 1.3 was released over the weekend and includes a new ‘Apollo Ultra’ subscription package, which offers features such as realtime notifications, app theming, and more.

What makes Apple’s approval and subsequent rejection puzzling, however, is that Selig worked directly with Apple to ensure the update did not violate the App Store Guidelines. He was originally told by Apple that so long as he bundled realtime push notification support with other features, such as theming and custom app icons, the update would be approved and not in violation of the guidelines.

This is ultimately what he did with Apollo for Reddit version 1.3. Two weeks ago, Selig explained the situation on Reddit:

A really nice representative from Apple called a few days ago to talk about 1.3, which was super cool of them.

The gist of it is what y’all suggested and we discussed in the previous thread is what Apple suggested as well. The issue is that while they completely understand there’s intrinsic server costs associated with push notifications (and that I’m associating a fee more with the server end of things that is required to get to the notifying step, rather than the notification itself), since at the core push notifications are a system capability, they’re not comfortable allowing notifications to be locked behind a purchase due to the potential of abuse in other situations.

They suggested bundling it with things that aren’t system capabilities as part of a feature/bundle pack like we talked about (Apollo Premium or Apollo Plus, dunno yet), so long as the other features in this pack aren’t system features (for example he said I couldn’t do push notifications and AirPlay support or something). Which is totally fine, because our plan was to do the notifications, app theming, and a cool custom icon as part of the pack.

The situation is certainly a puzzling one, and one that doesn’t necessarily reflect well on the App Store Review process. As for what the future holds remains unclear, but Selig says he’ll continue to keep users of Apollo for Reddit updated.