Review: Blackmagic eGPU Pro – more powerful and capable, but who is it for? [Video] 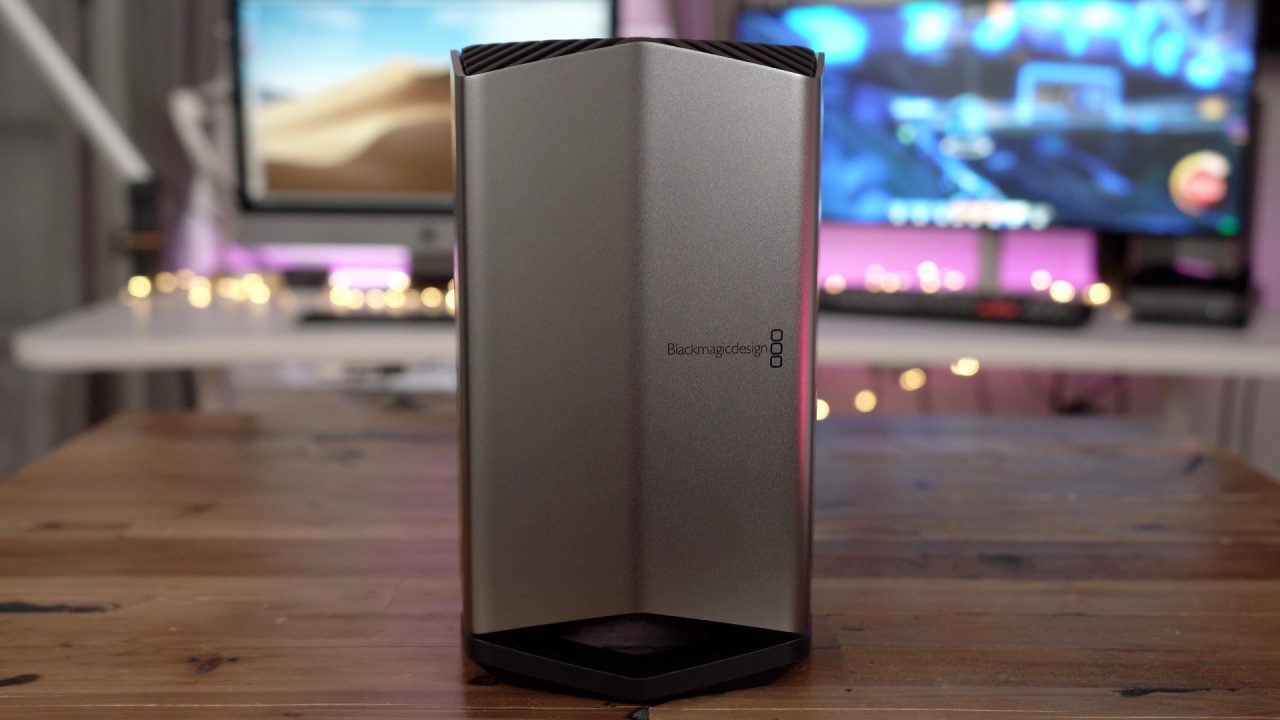 After several delays, the Blackmagic eGPU Pro is now available for purchase at Apple’s online and retail store locations. The Pro version of Blackmagic’s external graphics chassis is an upgraded version of 2018’s initial release.

The original Blackmagic eGPU was a limited device for several key reasons: it was expensive at $699; it couldn’t be upgraded; and with Radeon Pro 580 graphics, it lacked the punch of higher powered cards. Some of those problems carry over with the release of the new Blackmagic eGPU Pro, but it’s unquestionably a better device than its predecessor. Watch our hands-on video review for the full lowdown.

If you enjoyed the design of the original Blackmagic eGPU, then I have good news: the exterior of the Pro version is nearly indistinguishable from the original. Only the back panel I/O and a few strategically placed stickers give away the fact that it’s the upgraded model.

Everything from the original — the dimensions, the weight, the octagon single–block-of-aluminum-chassis, the stand, and the top exhaust vent — is exactly the same. Of course, the GPU inside is upgraded to an RX Vega 56 from a Radeon Pro 580. 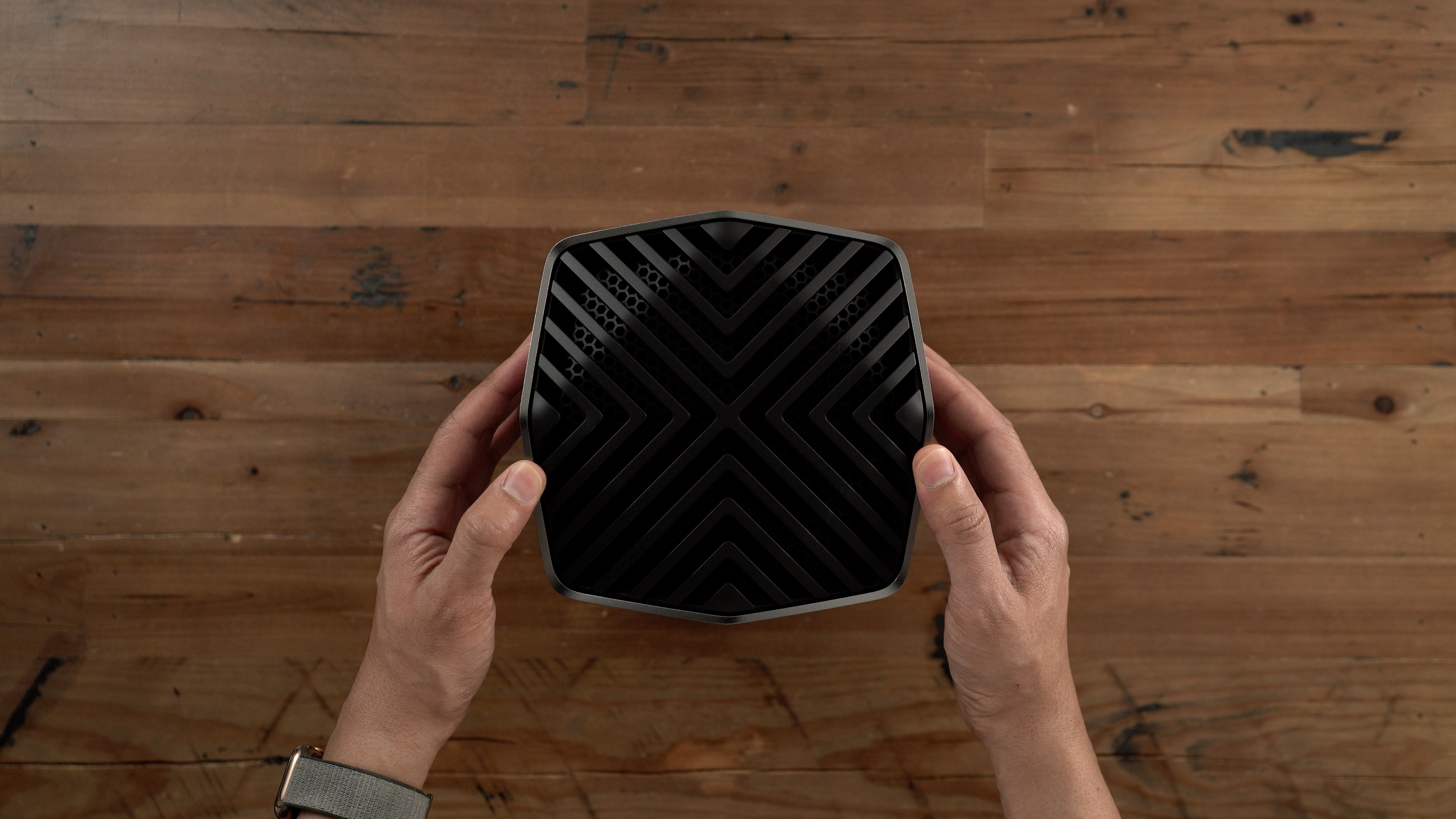 The all-aluminum tower design is beautiful; it looks better than any eGPU chassis on the market by a wide margin. Instead of making the same old boring rectangular box that others seem compelled to make, Blackmagic created a good-looking tower enclosure worthy of any desktop.

Like the original version, the Blackmagic eGPU Pro has several key advantages over custom-built eGPU setups like the Razer Core X (review)…

For starters, thanks in part to its Titan Ridge Thunderbolt 3 controller, it’s the only eGPU that can directly power LG’s UltraFine 5K Display. This is made possible by a second Thunderbolt 3 port that connects directly to a Thunderbolt 3-enabled display. For those with an LG UltraFine 5K display, or the recently released LG UltraWide 5K2K Display, this affords a dead simple setup via Thunderbolt 3. 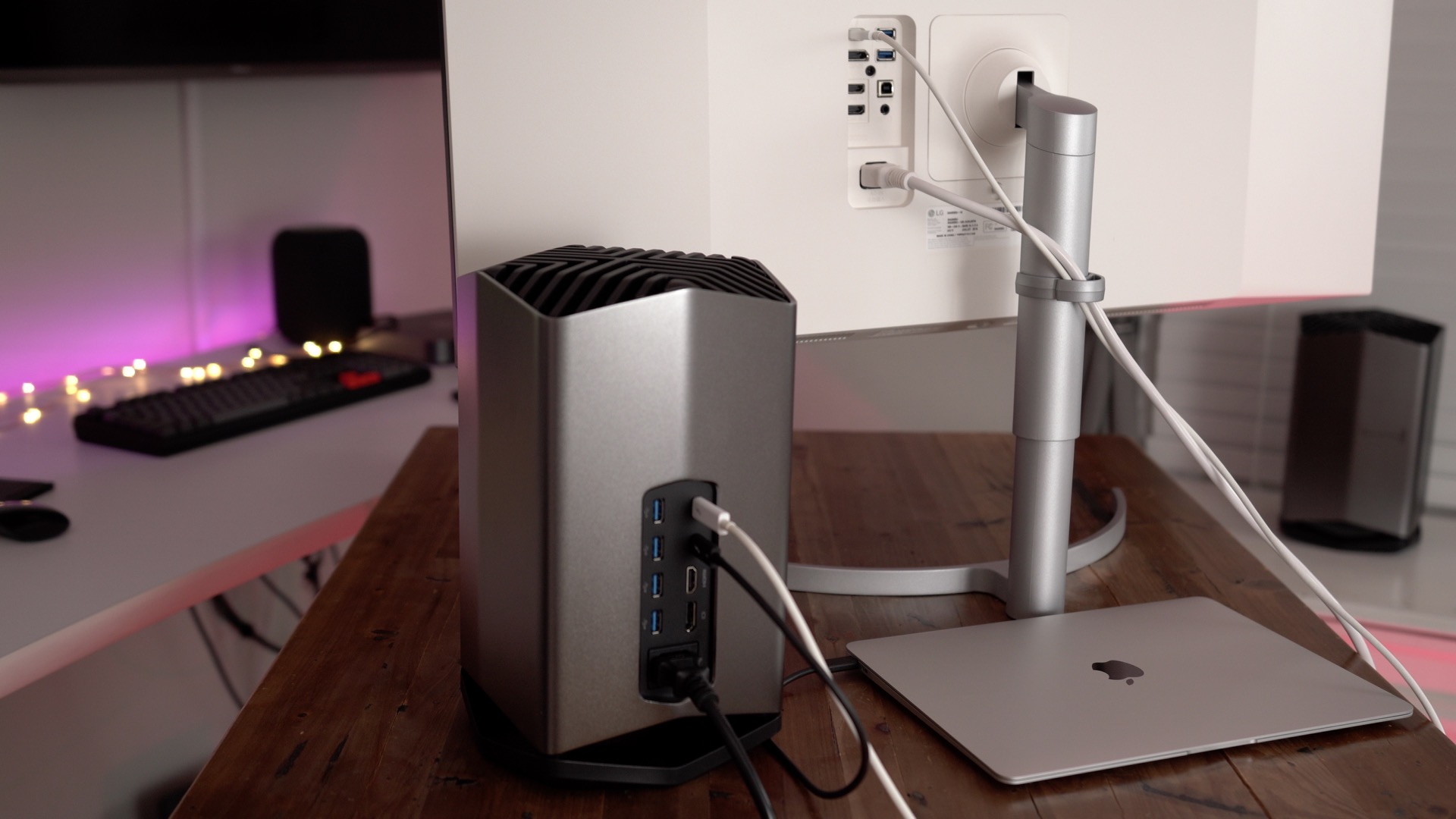 The next big advantage that Blackmagic’s eGPU has over a custom do-it-yourself config, is the overall quietness of the unit, even when under load. The original Blackmagic eGPU was ridiculously quiet, so much so that it was hard to tell that it was on without getting right next to it. 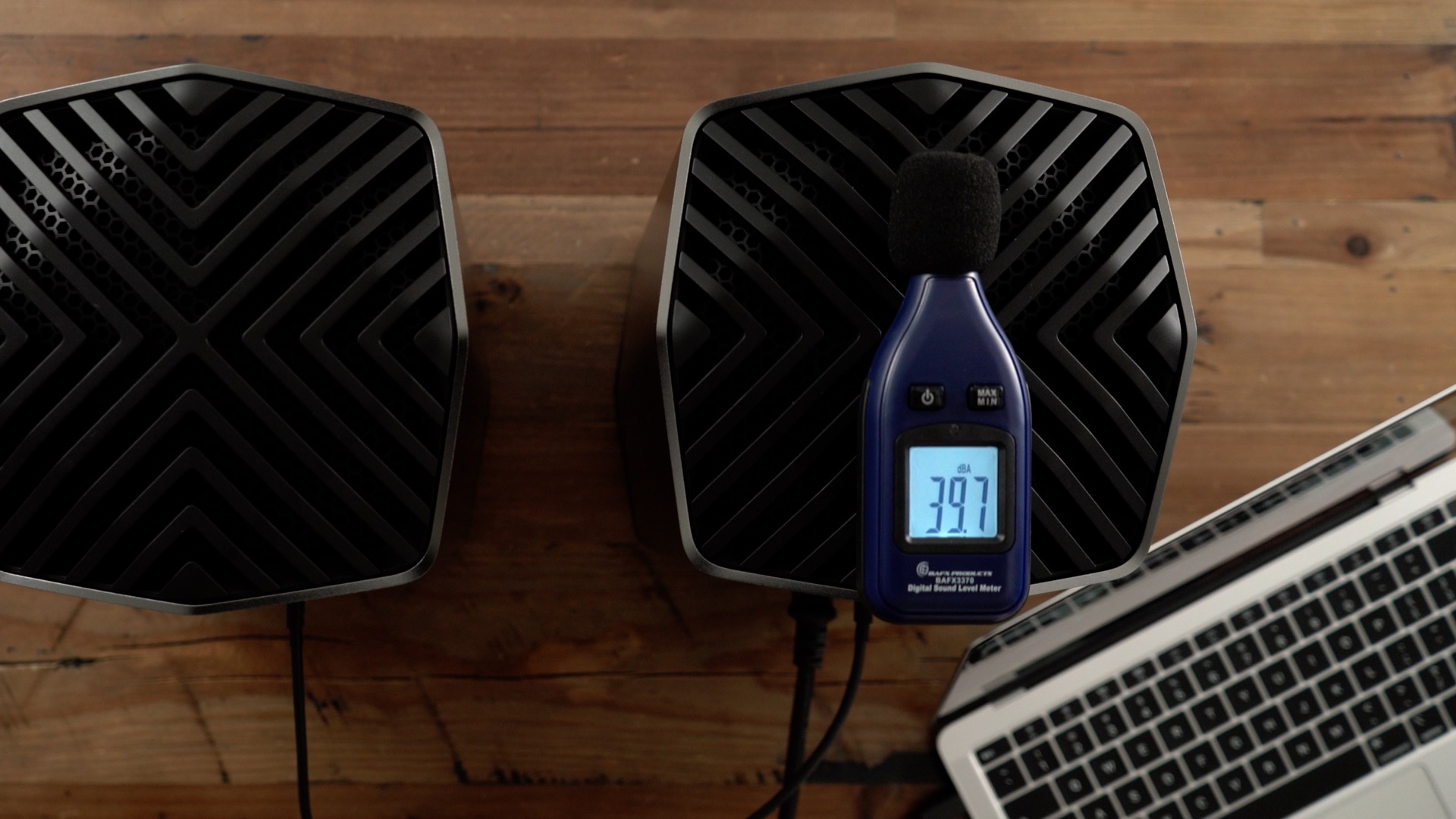 I was a little skeptical as to whether Blackmagic could pull off a similar acoustic footprint with a more powerful GPU to keep cool, but was surprised to find that the Blackmagic eGPU Pro is nearly as quiet as its predecessor. Neither unit is completely inaudible — the units are just much quieter than anything else out there, and that’s by design. 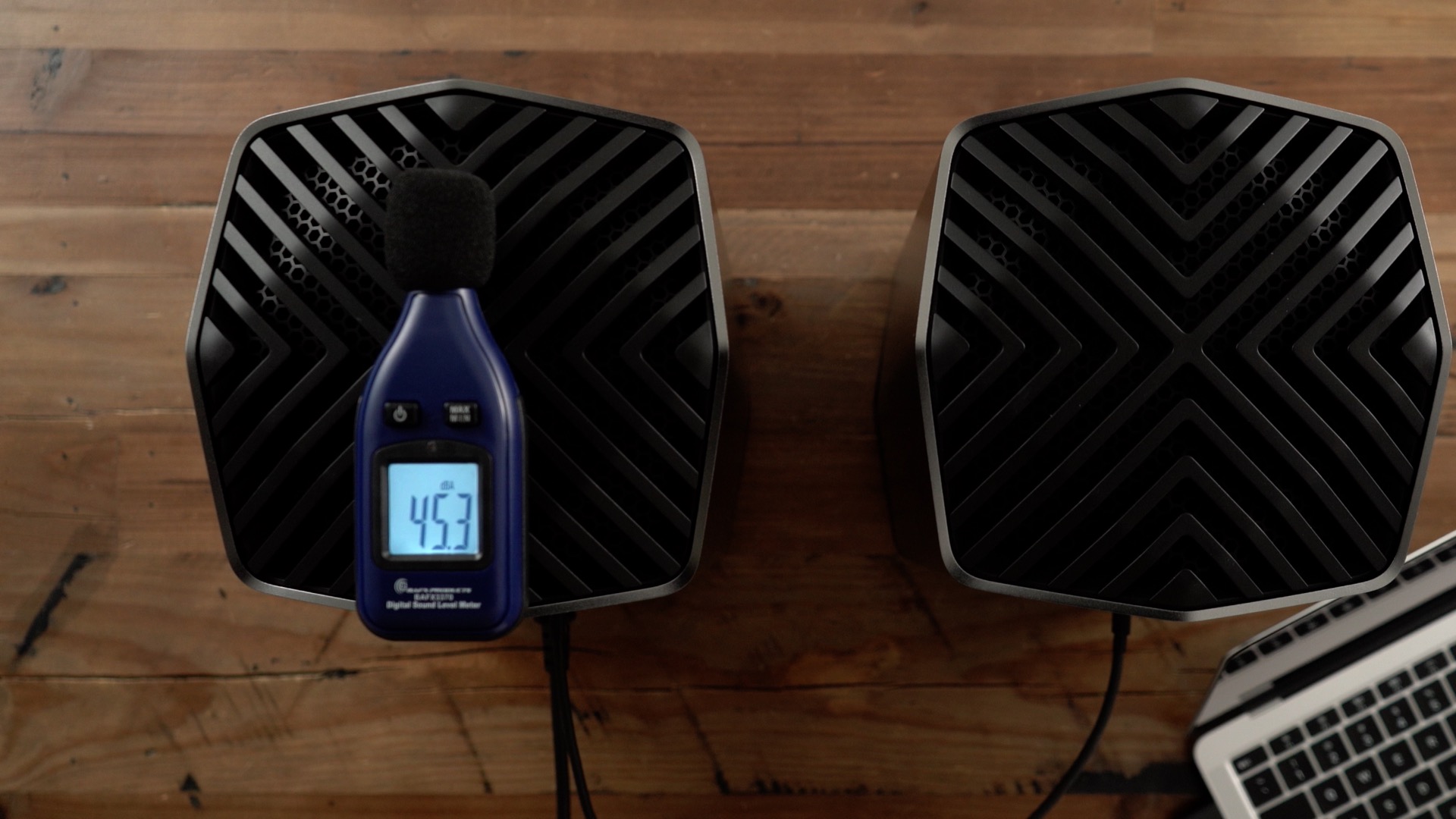 One of the interesting changes with the Pro version of Blackmagic’s chassis is that the unit stays powered on with the fan running, even when disconnected from a Thunderbolt 3 host. The regular Blackmagic eGPU, like many other external graphics enclosures, stays off until it senses a Thunderbolt 3 connection. I’m not sure why the Blackmagic eGPU Pro differs in its behavior, but I can confirm that the unit automatically powers off after a period of time if no host is connected.

At any rate, If you’re a creative professional who demands a quiet environment, then you’ll be impressed by how quiet the RX Vega 56 is, even while under load. Its relative silence is one of the tentpole reasons for considering the Blackmagic eGPU Pro.

The previous Blackmagic eGPU lacked a dedicated DisplayPort connection. Although this wasn’t a huge issue for those wishing to connect to 4K displays — simple Thunderbolt 3/USB-C to DisplayPort adapters could be used with the second Thunderbolt 3 port — it presented an inconvenience for those who wished to directly connect their DisplayPort displays without dongles. 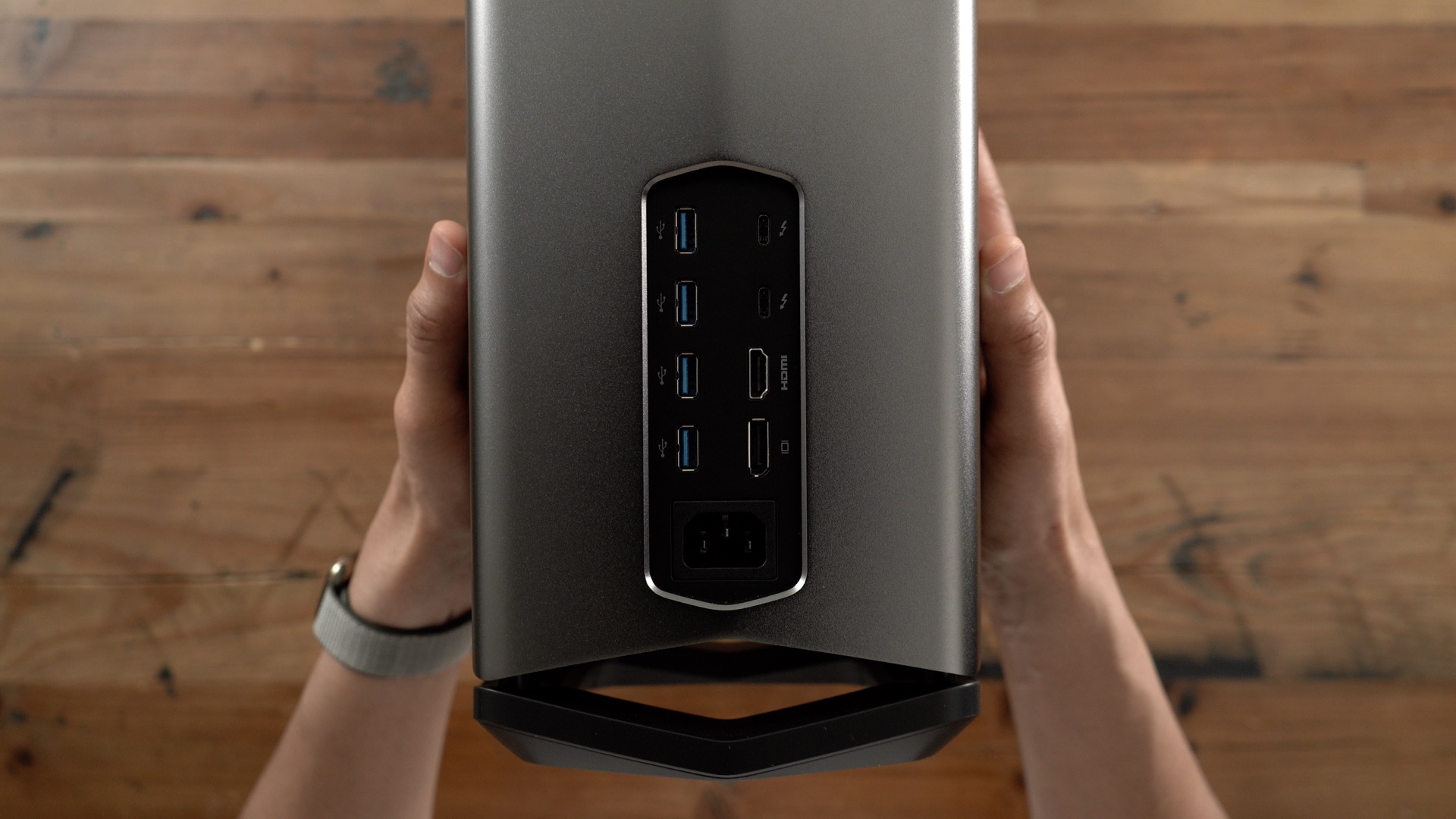 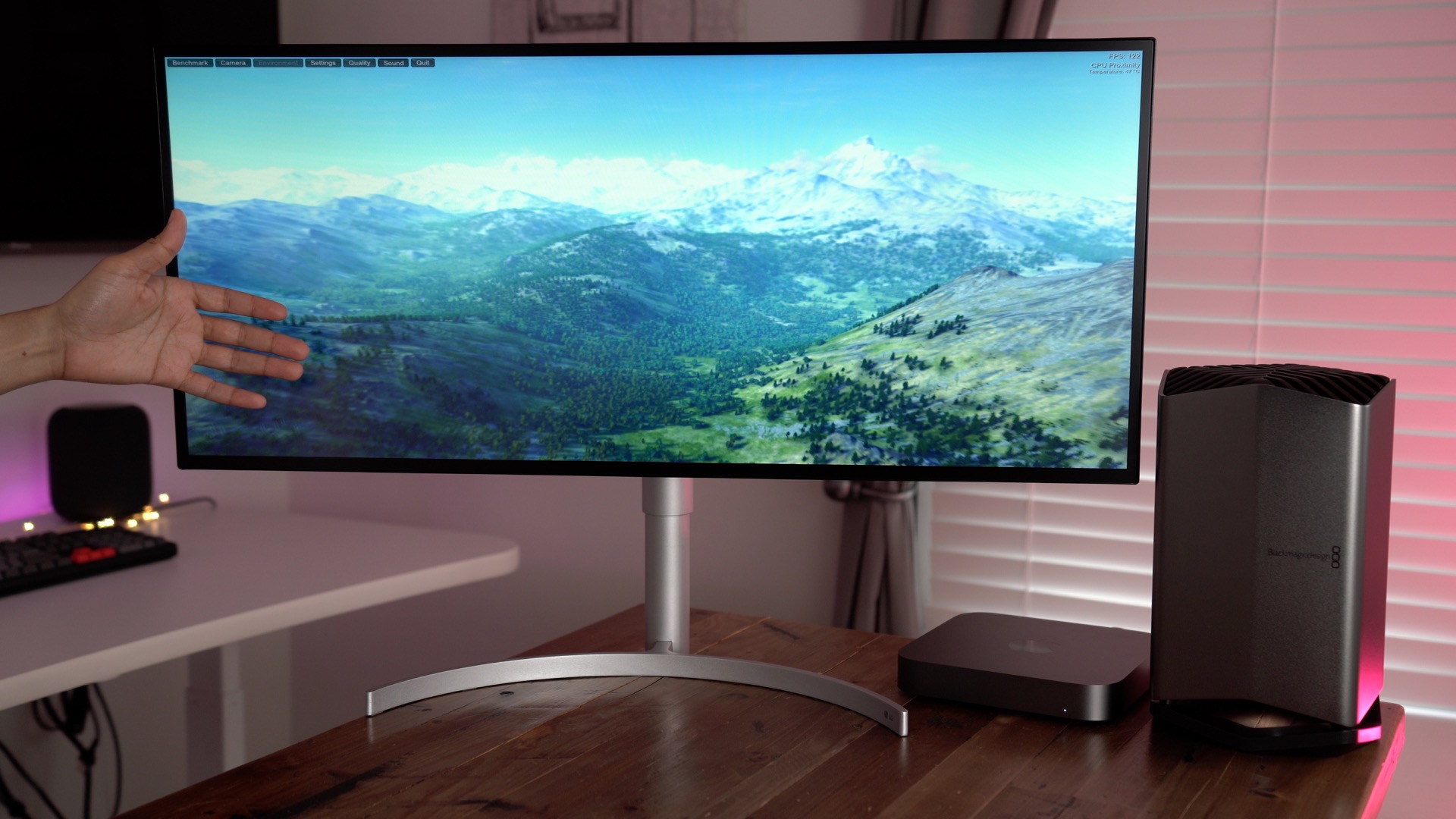 The Blackmagic eGPU Pro ups its game by adopting an RX Vega 56 GPU. The result is a device that provides a bigger boost in speed over the previous version, speed that’s roughly comparable to what you’ll find in the base model iMac Pro.

It’s no shocker that one of the apps that benefits most is Blackmagic’s own DaVinci Resolve. The feature-packed NLE relies heavily on discrete GPU computation, which makes it particularly challenging to work without one. Simply put, a competent GPU is an absolute must when working in DaVinci Resolve, whether you’re exporting or playing back an effect-laden non-rendered timeline.

The RX Vega 56-powered Blackmagic eGPU Pro obviously performs better than the non-Pro model, but what’s really interesting is how it compares to my custom RX Vega 64 eGPU build. As you can see from the DaVinci Resolve export benchmark, the Blackmagic eGPU Pro is well within striking distance of my RX Vega 64-powered setup. 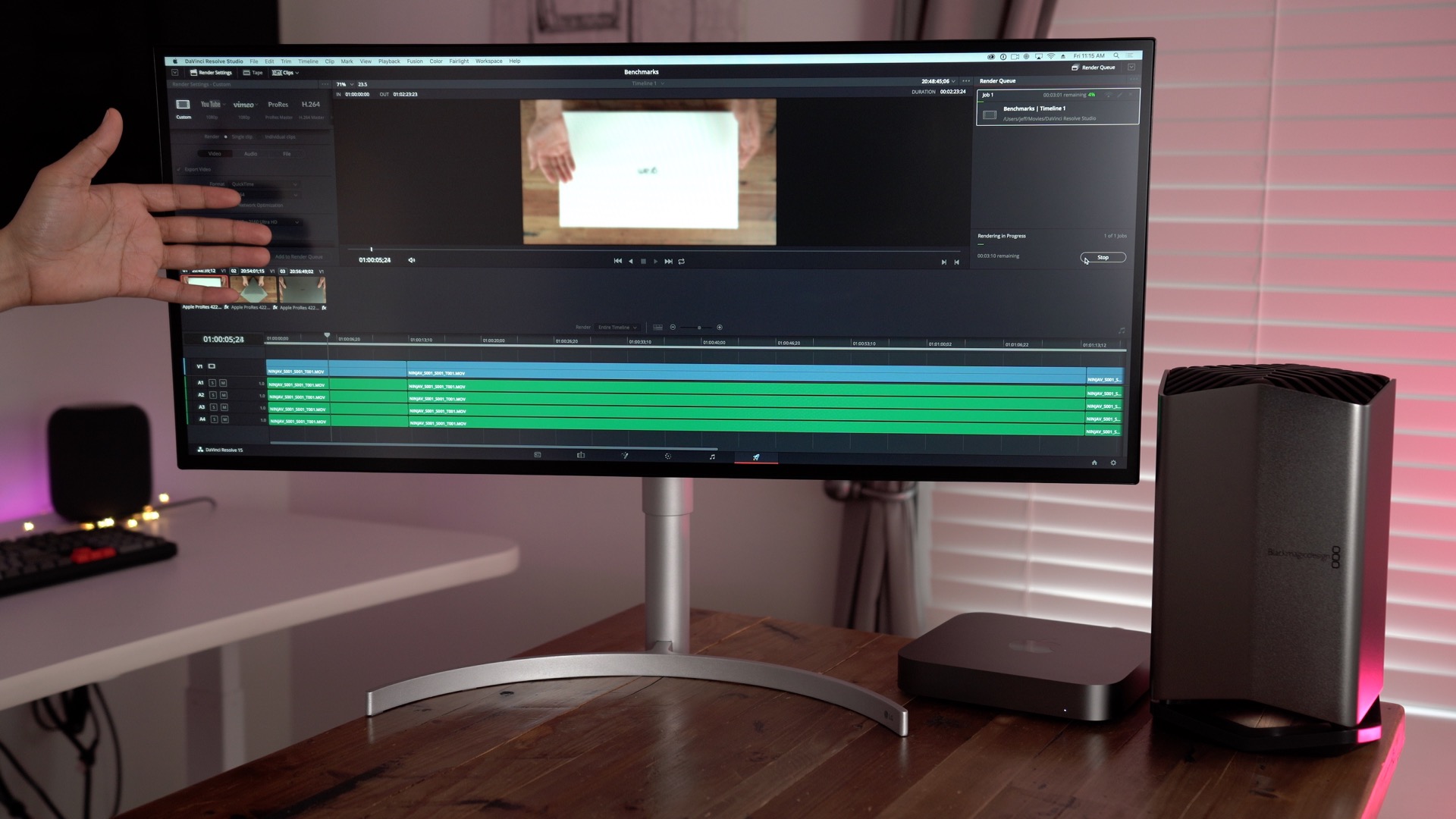 One possible explanation for the results are highly optimized drivers. Apple and Blackmagic worked together to make the eGPU Pro a reality, so it’s highly likely that it’s been specifically tuned to eek out the best performance in macOS Mojave.

Yet again, I was surprised to see how well the Blackmagic eGPU Pro performed in relation to the more powerful Vega 64. The Vega 64 is faster in these tests, but not by much.

As expected, both Unigine Heaven and Valley benchmarks illustrate the benefits of external GPUs, even for apps that rely on OpenGL, which has been deprecated in favor of Metal 2 in macOS Mojave.

With the OpenGL benches, the brute strength of the Vega 64 pushes through, performing better than the Blackmagic eGPU Pro, although it was a slim difference.

Like the Unigine tests, the Luxmark, Cinebench and Geekbench 4 tests further emphasis the overall benefits of having access to a stronger discrete GPU.

With the LuxMark OpenCL test, the Blackmagic eGPU Pro separates itself from the non-pro version, handily beating it in all three benchmark tests.

And finally there is the GFXBench Metal test. Although the Vega 64 muscles through, the Blackmagic eGPU Pro, with its RX Vega 56, proves to be no slouch, easily coming within striking distance of the faster card.

Not ‘workstation class’ but Pro nonetheless 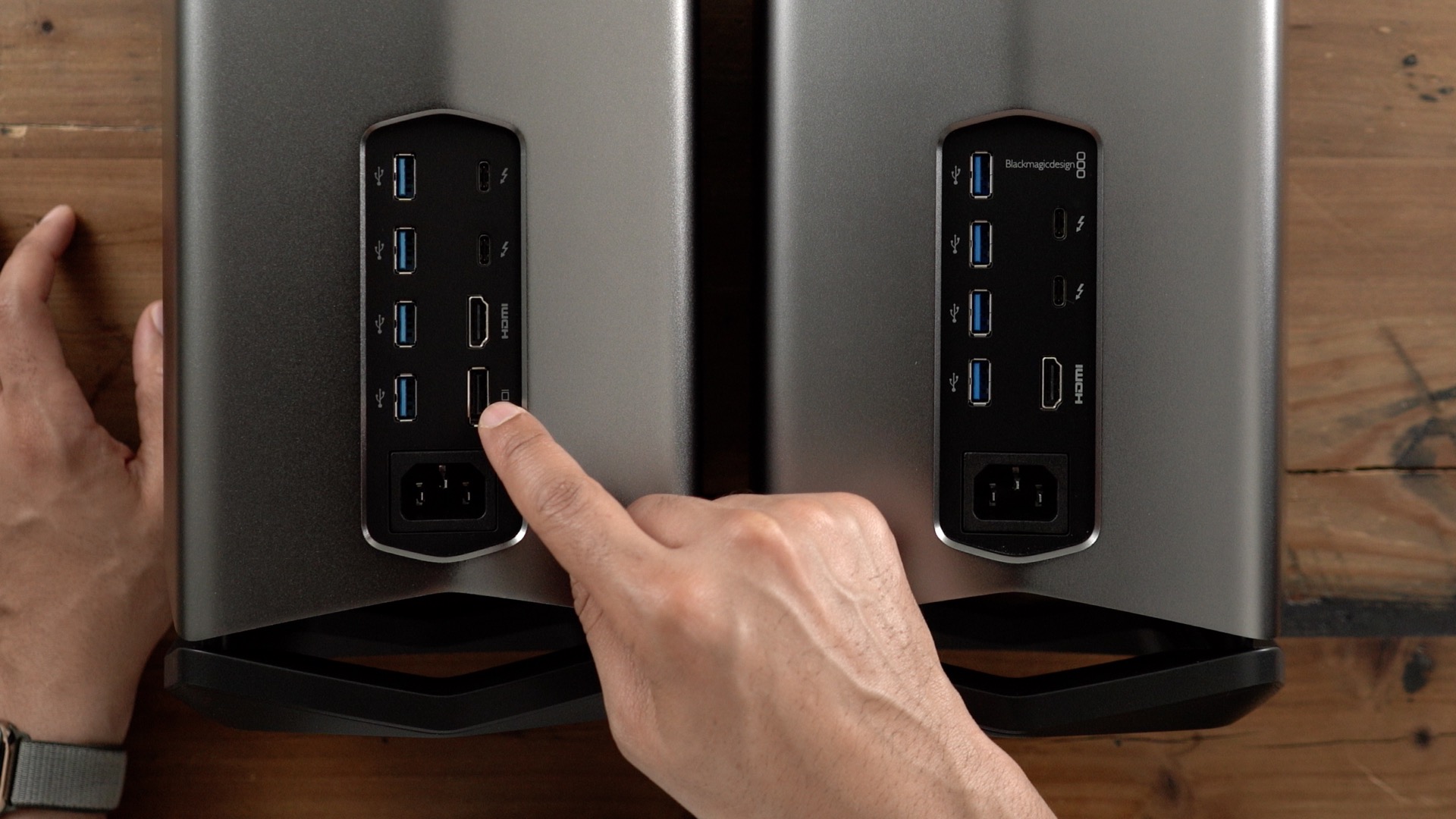 To be clear, performance between the pro and consumer model GPUs is largely the same, but I found it to be a weird discrepancy, though I’m not sure if it even matters.

Even with the faster GPU and addition of DisplayPort 1.4, the Blackmagic eGPU Pro can feel like a rip off when you only consider performance. This is still just an RX Vega 56, a card that you can pick up standalone for less than $500 on Amazon. Add in a $300 enclosure, and you can see why $1200 for the Blackmagic eGPU Pro seems so steep. 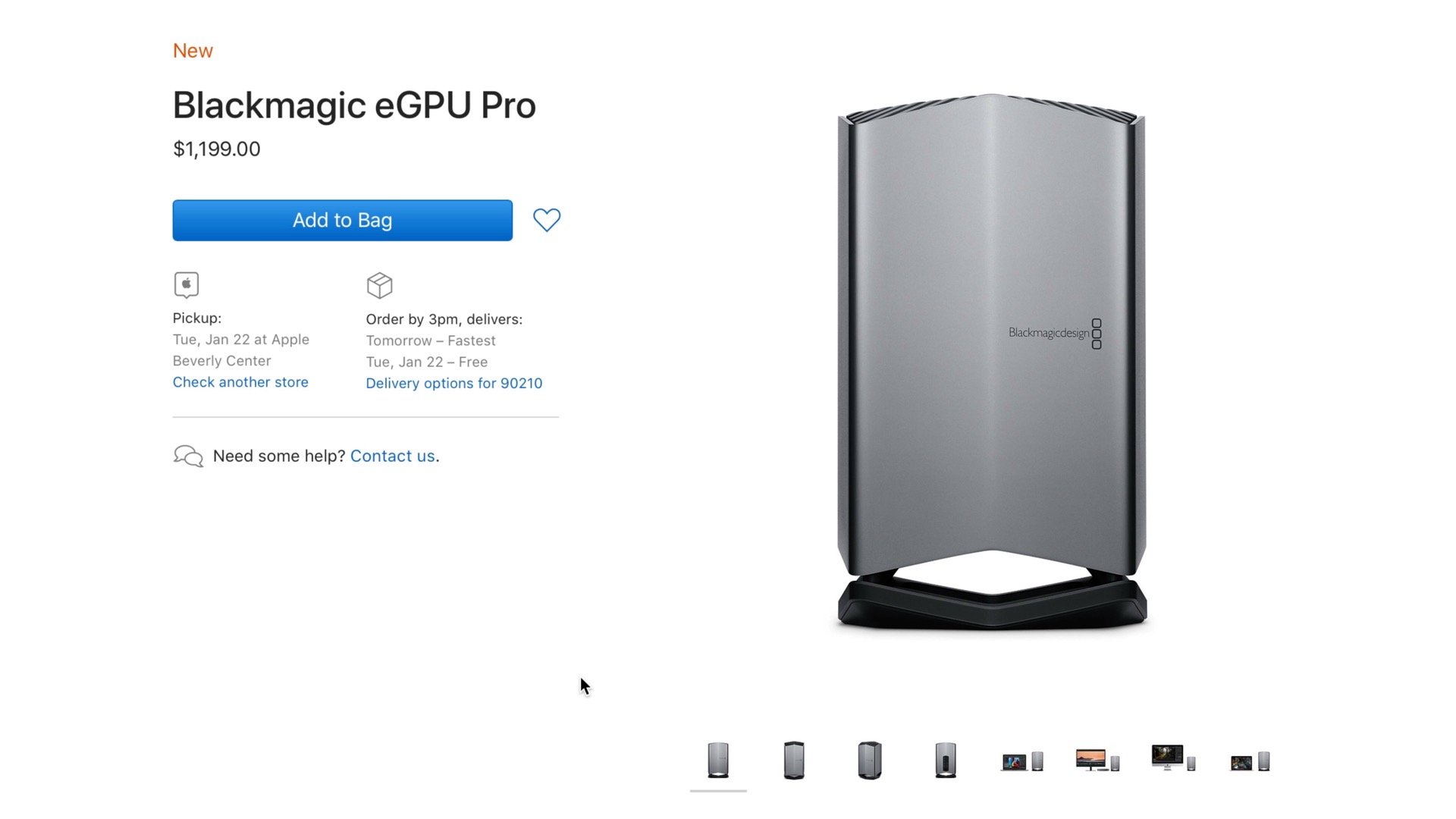 But that’s not even the real reason why it stings so much to drop $1200 on this enclosure. The real reason such an investment hurts is because, just like the previous iteration, the Blackmagic eGPU Pro cannot be upgraded.

The RX Vega 56-driven enclosure that you buy today is the same RX Vega 56 that you’ll be using inside the unit five years from now. By then, such a card will likely seem laughably slow, and there’s no upgrade path. Especially for gamers, who need to upgrade to play the latest games, this is a bad value proposition. 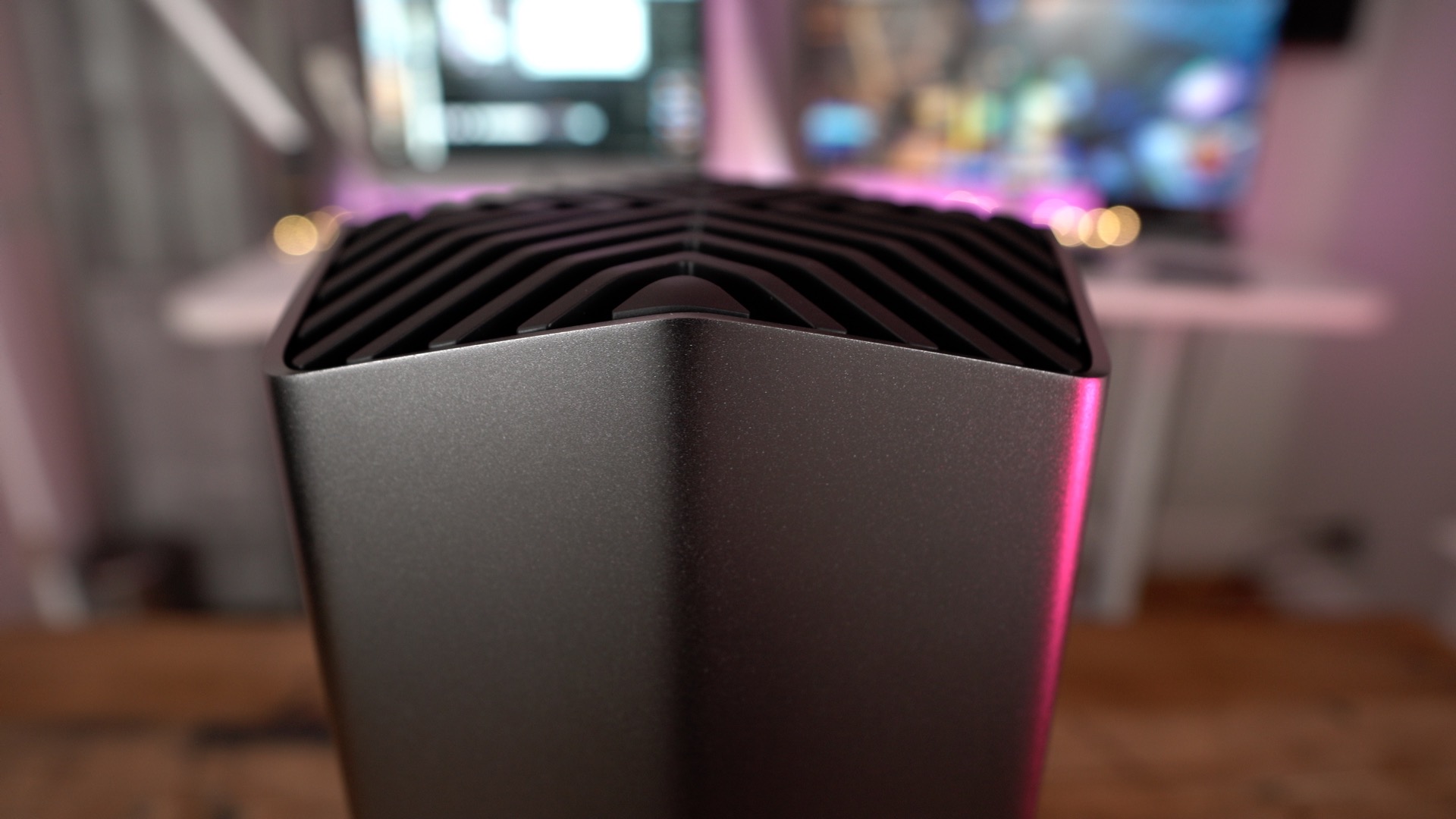 The best looking eGPU chassis on the market

Such a reality doesn’t automatically make the Blackmagic eGPU a bad investment, however, especially when you consider how well it compares to my custom Vega 64 eGPU setup. It can be a great investment if it allows you to be more productive as a creative professional. For example, if you’re working in an editing environment where low noise is a requirement, then the Blackmagic eGPU Pro makes for an obvious choice. 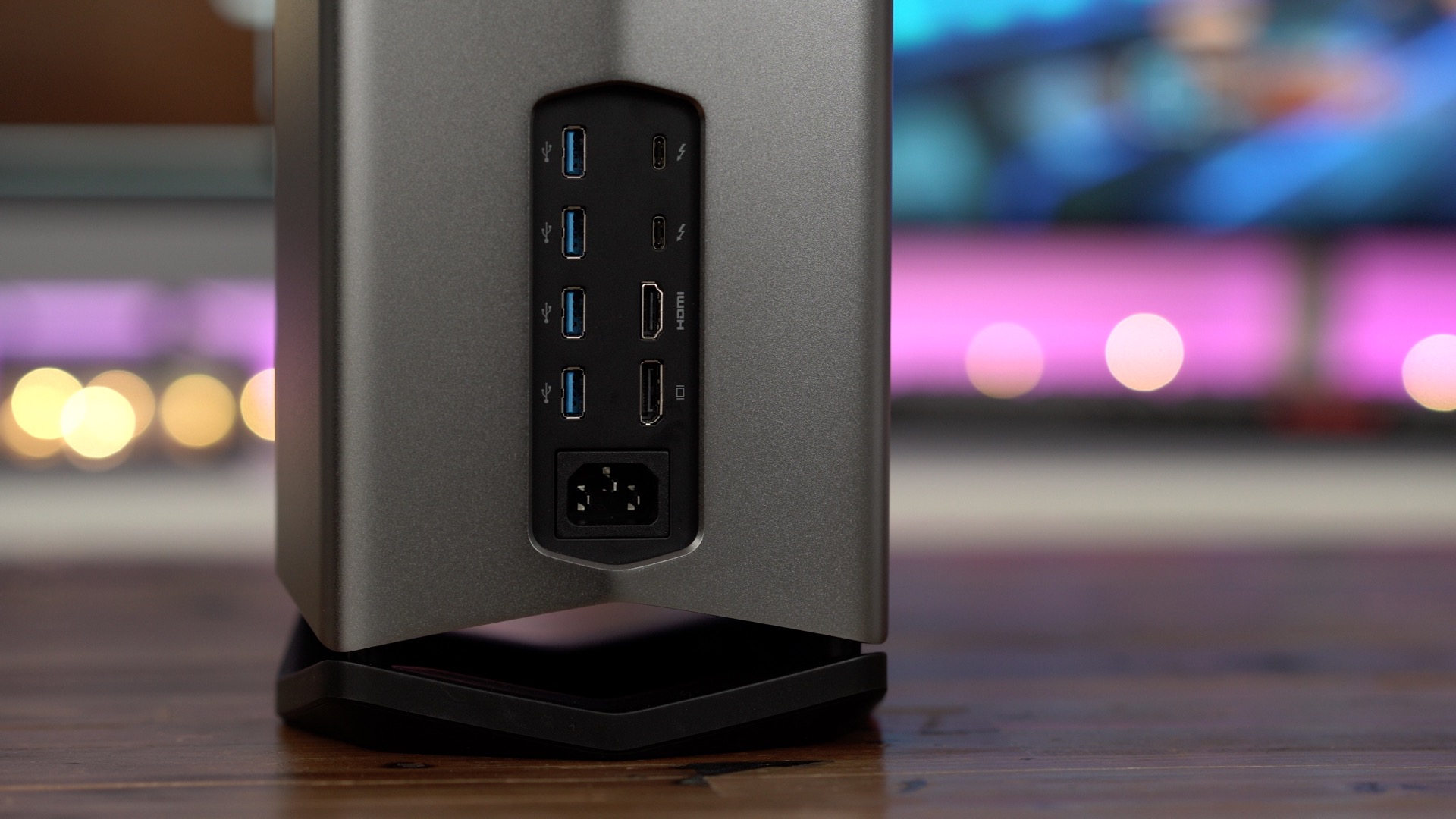 The addition of DisplayPort is a big deal for compatibility, a feather in the cap of the Blackmagic eGPU Pro when compared to the original. As 5K and higher displays gain popularity, having DisplayPort in addition to a more limited HDMI 2.0 port will prove its worth. 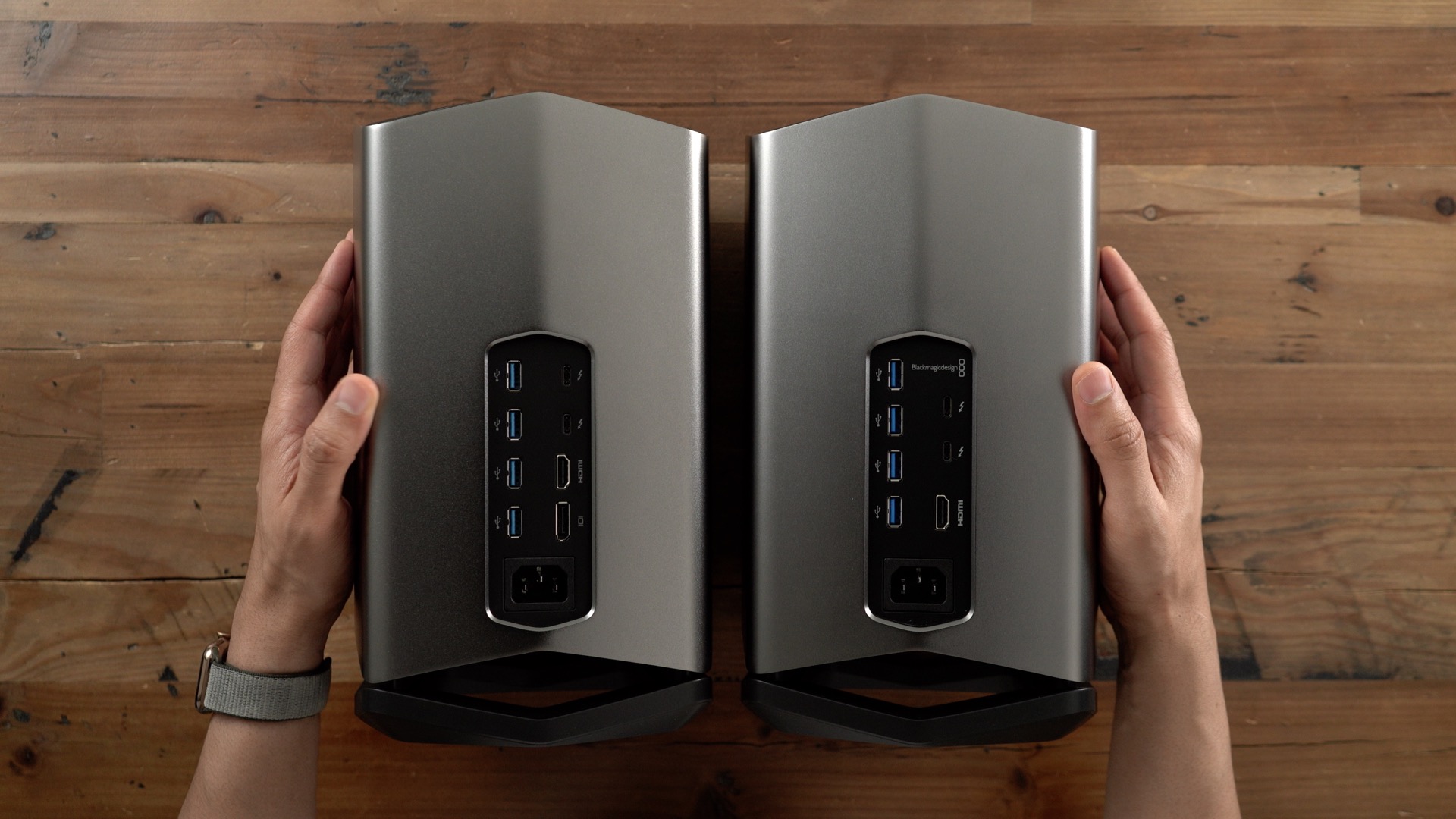 And what if you need to drive an LG UltraFine 5K Display with discrete graphics? The Blackmagic eGPU Pro is a great way to gain more performance via a simple and easy Thunderbolt 3 connection, and no other eGPU on the market, sans its predecessor, has that ability out of the box. 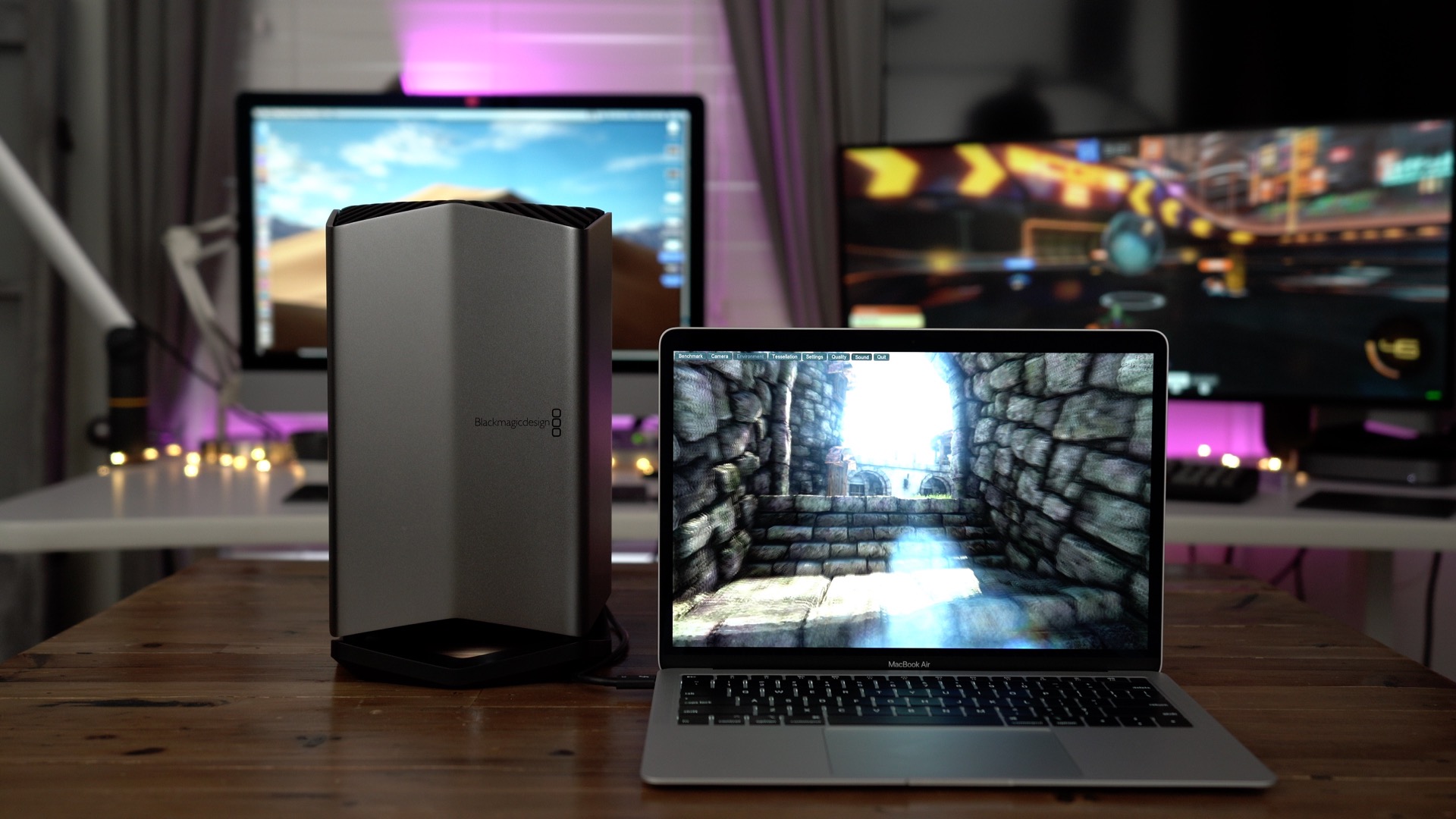 You’ll need to analyze your own situation and needs to determine whether or not the Blackmagic eGPU Pro is a bad value proposition. If you’re a creative professional who values the qualities that the unit brings to the table, it may be a prove to be a good value. On the opposite end of the spectrum, if you’re a gamer looking to boost the performance of your Mac, then there are better ways to spend your money.

What do you think? Sound off in the comments down below with your thoughts and opinions.