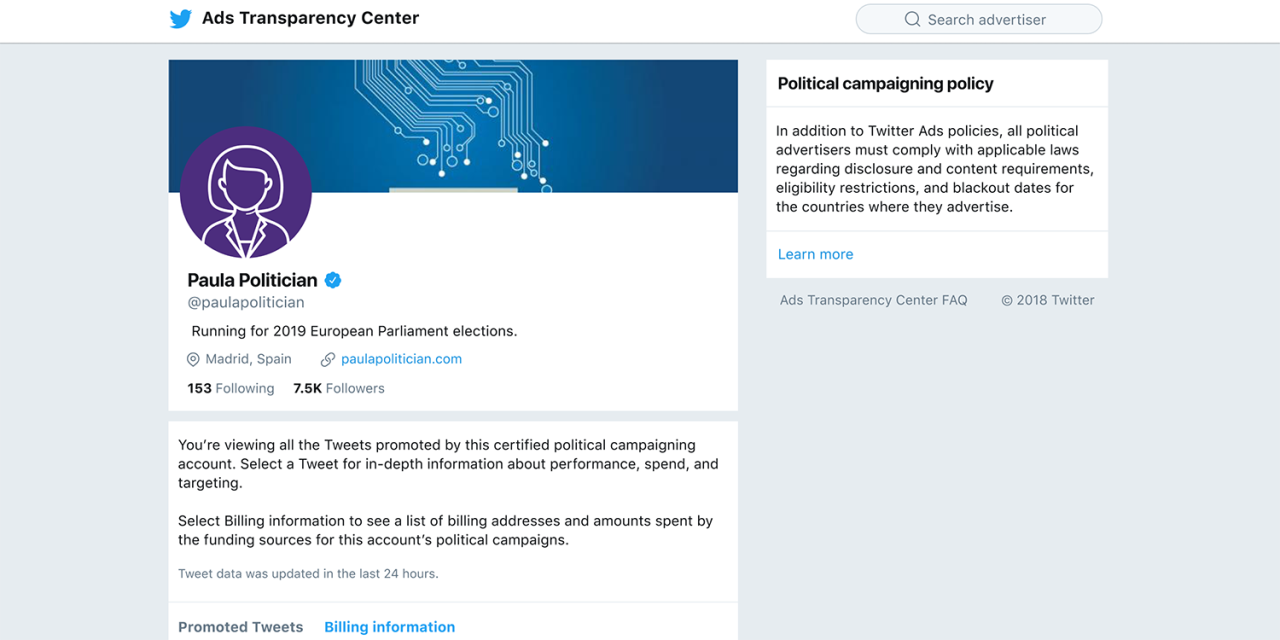 In an effort to protect the US midterm elections from foreign interference, Twitter introduced tools designed to provide transparency into political ads on the platform. The company has today rolled out those same Twitter political ad tools in Europe …

The company announced the development in a blog post.

This May, millions of citizens from across the European Union’s (EU) 27 Member States will have their say on the future political complexion of the European Parliament. The second largest democratic exercise of its kind in the world in 2019, the European elections will have a major impact on the region’s geopolitical outlook and priorities for the next five years […]

There are three elements. First, Twitter will verify the identity of advertisers and determine their eligibility. For ads relating to the European Parliament, only organizations based in the EU will qualify.

To qualify for the policy, candidates, organisations, and individuals seeking to advertise political campaigning content must now undergo a thorough certification process. Once proof of identity is verified, and advertisers meet our eligibility requirements, a letter with an access code will be posted to their address to confirm they are located within the EU. This will ensure that only EU-based individuals can advertise political campaign content on the service.

Second, political ads won’t just be identified as sponsored content, they will also have a specific symbol and a disclaimer. Finally, you’ll be able to click through to the Ads Transparency Center to see who paid for the ad, who they are targeting and how much the total campaign is worth.

Twitter says it has also formed a team devoted to guarding against malicious actors trying to use general posts to interfere with elections.

In addition to increased transparency around political ads, we’ve also formed a high-level internal elections group to lead our electoral integrity work in the region from now until polling day. Using our proprietary-built internal tools, the team will proactively protect the integrity of regional trends, support partner escalations, and identify potential threats from malicious actors.

Cross-functional by design, the team consists of several of the company’s top trust and safety experts, as well as members of our site integrity, legal, engineering, data science investigations, and our public policy teams in Europe. This blend of perspectives, expertise and backgrounds is absolutely critical.

It also mirrors the model we put in place for the internal teams who directed our proactive efforts during recent elections in Germany, Sweden, Mexico, the U.S., and Brazil. As we move forward, we will continue with this model of bringing in additional expertise and personnel who can augment our approach, growing the experience level from one critical election to the next.

Organizations wanting to use Twitter political ads can apply for registration now.