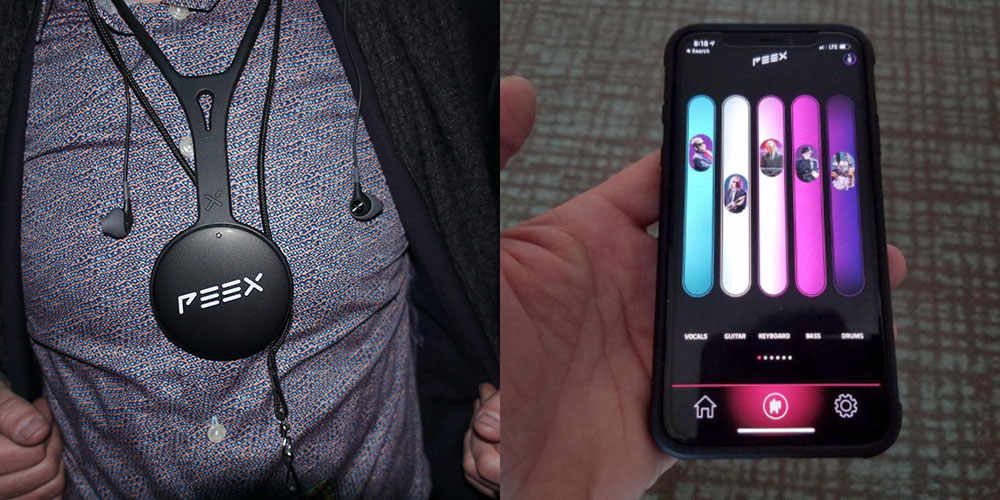 The future of live music concerts could be each audience member enjoying their own personalized sound mix, all controlled by an app on their smartphone, says UK startup Peex.

CNET’s David Carnoy got to try it, and was impressed.

I’m standing off to the side of the stage when I feel my phone vibrate, alerting me that a text has come in.

“Suggestion…lead guitar is acoustic and gets lost on Rocket Man — I personally like to crank it.”

The message is from a rep for Peex, the disc-shaped wireless receiver I’m wearing around my neck. A set of wired earphones run from the device to my ears — yes, I’m actually wearing a pair of headphones at a concert, which is a little strange.

I open the Peex Live app on my iPhone (it’s available for Android devices, too) and put my finger on the lead guitarist Davey Johnstone’s icon and slide it up to around 80 percent of its peak level. As I move the slider, the sound of his instrument gradually begins to reveal itself until it’s distinctly heard, changing the whole dynamic of the iconic song.

Peex kit takes a feed from the main soundboard, and then wirelessly transits five separate channels to users. The feed is synched to your location in the venue, as the idea is that you listen to a mix of ambient sound and your headphone feed.

Carnoy said the benefits of the system depend on your seat.

For the first few songs at the concert I was sitting in the 15th row dead center. In this location, I wasn’t all that impressed with the Peex experience. I fiddled around with the sliders, but I didn’t think my experience was enhanced much.

I then made my way around the arena to less desirable seating locations, including the nosebleed seats at the top of the arena […] Here Peex made a big difference, filling in the sound where it was recessed or just missing. It was like listening to two different concerts.

The plan is that you’ll be able to rent the system at the concert, and also get a virtual concert experience afterwards through a ‘relive’ app which gives you the same 5-channel mix control when listening to the recording.

There’s no word yet on pricing or availability, as Peex has to negotiate with each artist and venue, but I’d certainly be interested in trying it.

We’re starting to see tech make some surprising in-roads into traditional music experiences. Traditional grand piano-maker Steinway last week announced a new model that has an iPad interface to allow you to record, edit and playback your performances on the piano itself.