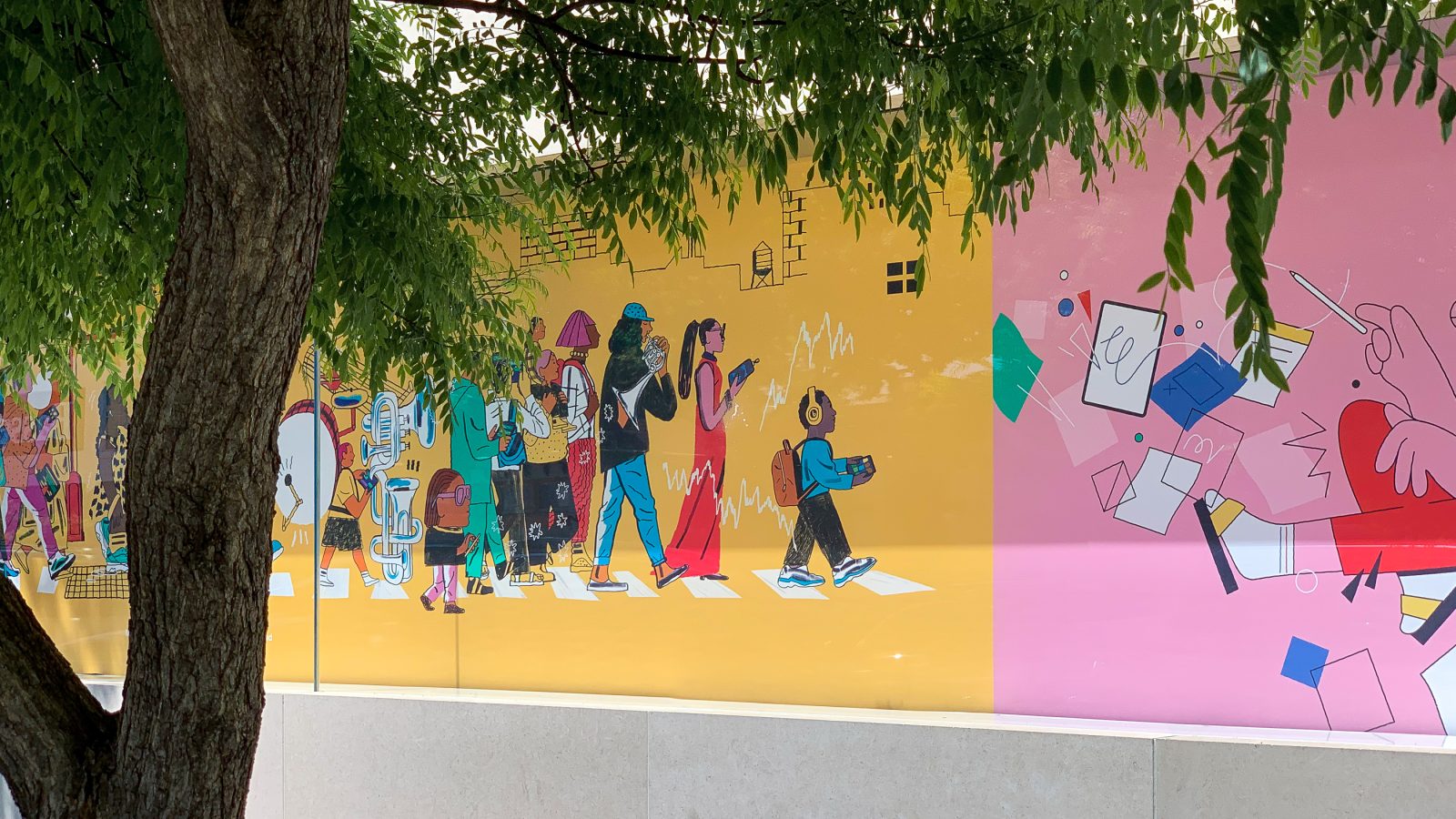 As Apple pushes to expand or upgrade all of its existing classic store locations with increased customer capacity and better capabilities to host Today at Apple sessions, we’ve learned about some of the latest projects underway or in consideration across the United States. First up is Columbia, Maryland, where Apple has filed plans to renovate an existing tenant space inside The Mall in Columbia.

On the mall’s second floor, Apple intends to transform a vacant, roughly 8,000 square foot Abercrombie & Fitch space into a modern store likely consistent with the design guidelines employed by other recent indoor locations like Apple Galleria Dallas, which just opened this past weekend, and Apple Natick, which reopened in February.

Tenant demolition documents call for the removal of interior columns in preparation for a complete renovation. Separated on the left only by a Banana Republic and access hallway, Apple’s existing store dates back to 2006 and is roughly 5,000 square feet. Abercrombie & Fitch has relocated to the mall’s lower level. 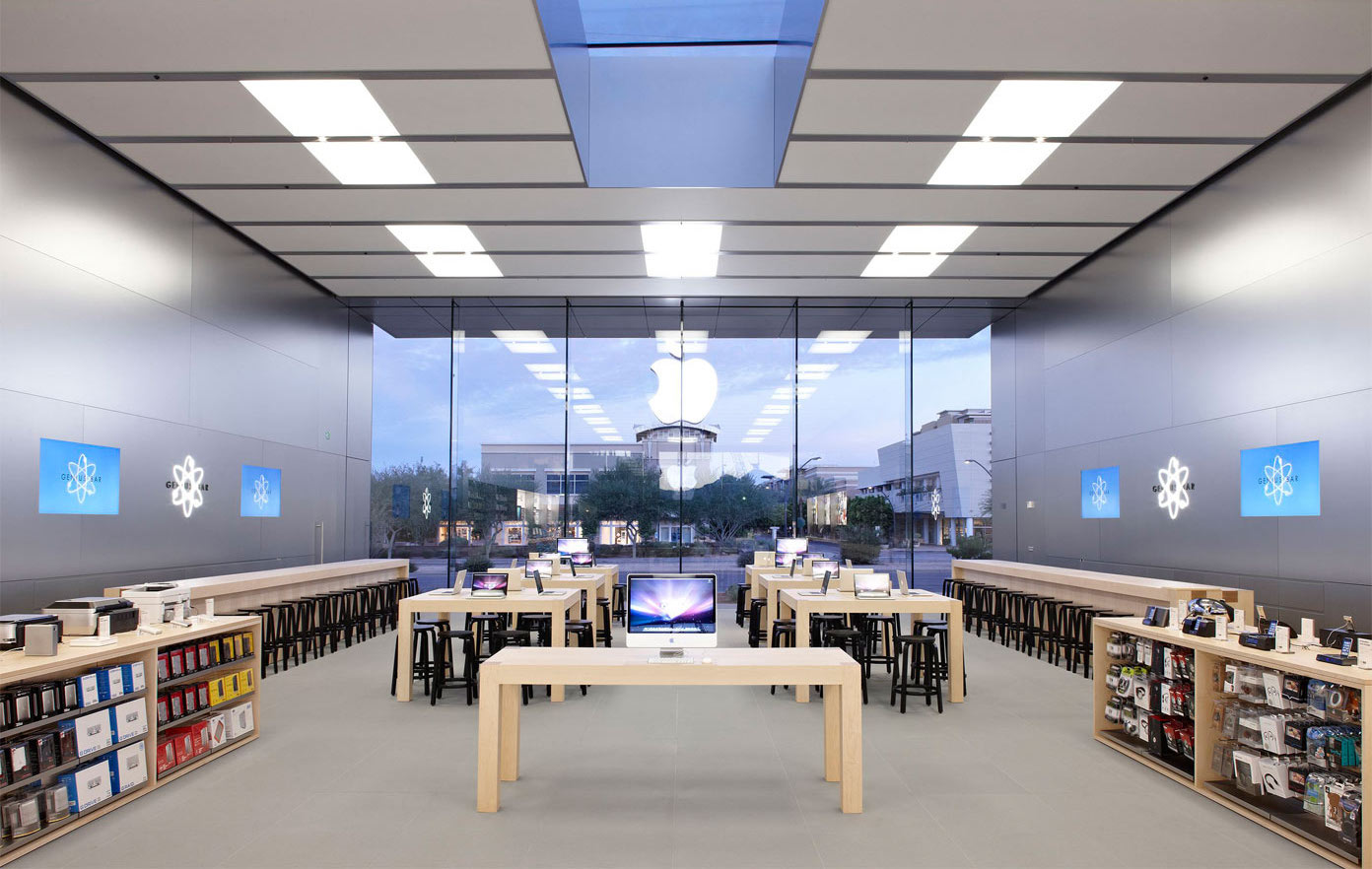 More rapid than store relocations and new construction are video wall upgrades at stores across the world. Locations with adequate capacity and suitable facilities remove their Genius Bars and outdated fixtures in favor of a Forum and video wall for Today at Apple sessions and increased seating. We’ve recently learned that Apple Scottsdale Quarter in Scottsdale, Arizona, Apple Eton in Woodmere, Ohio, and Apple Ridge Hill in Yonkers, New York all have similar store upgrades planned.

The end result of these upgrades should closely resemble Apple Easton Town Center in Columbus, Ohio, which just finished its own remodeling project earlier this April. 9to5Mac reader Charlie Vasant shared a photo of the finished video wall: 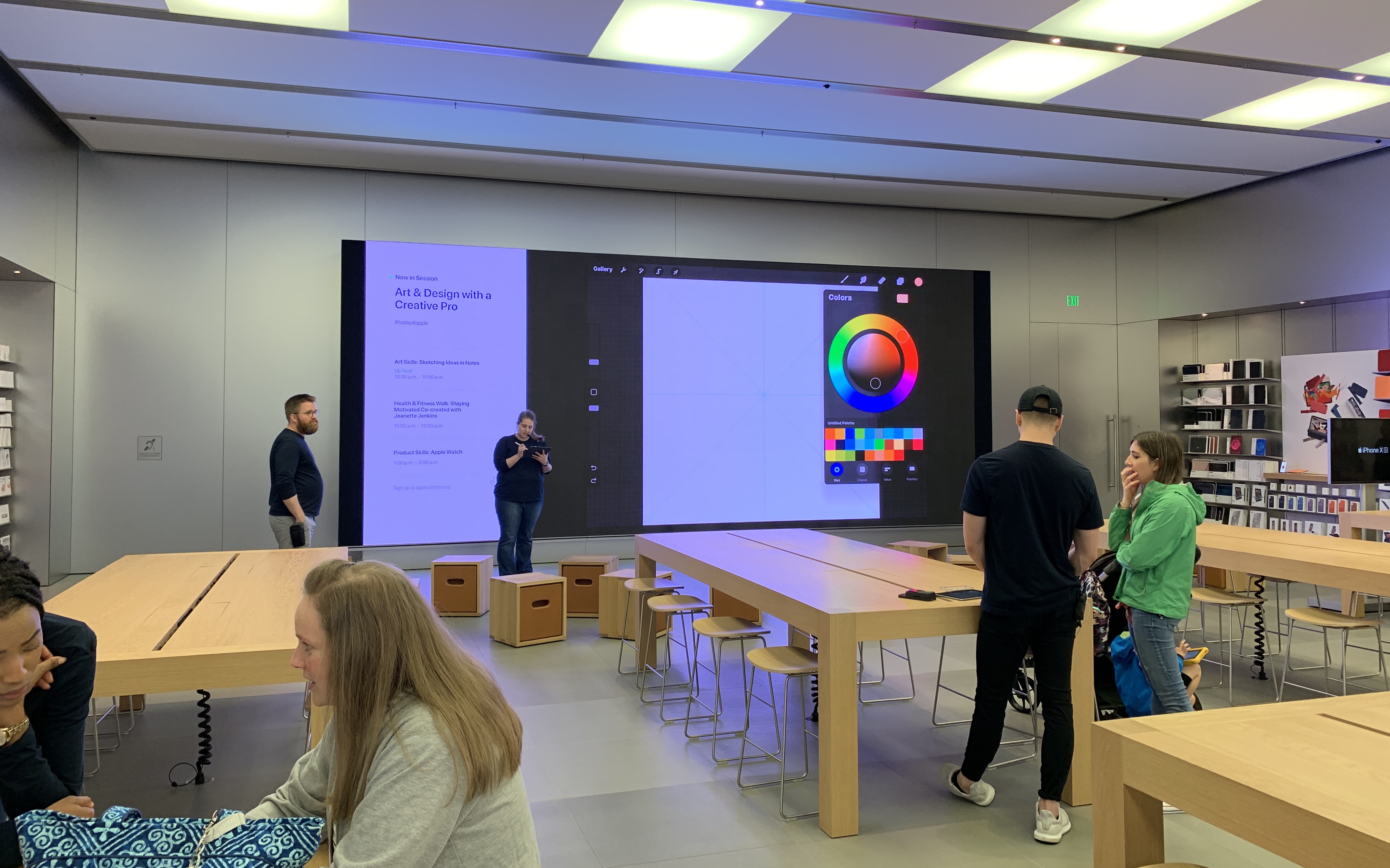 At Scottsdale Quarter, Apple has made the unusual decision to locate the store’s video wall near the center of the sales area instead of along a side wall, essentially splitting the store into two pieces. The display will have a polished backing facing the store’s service and learning tables, which will take the place of the existing Genius Bar area. New shelving will be installed, but Avenue displays will not be added.

Apple has only used a similar upgrade design in one other store across the world, Apple MixC Chengdu. Both locations offer entrances in the front and rear, limiting opportunities for video wall placement. 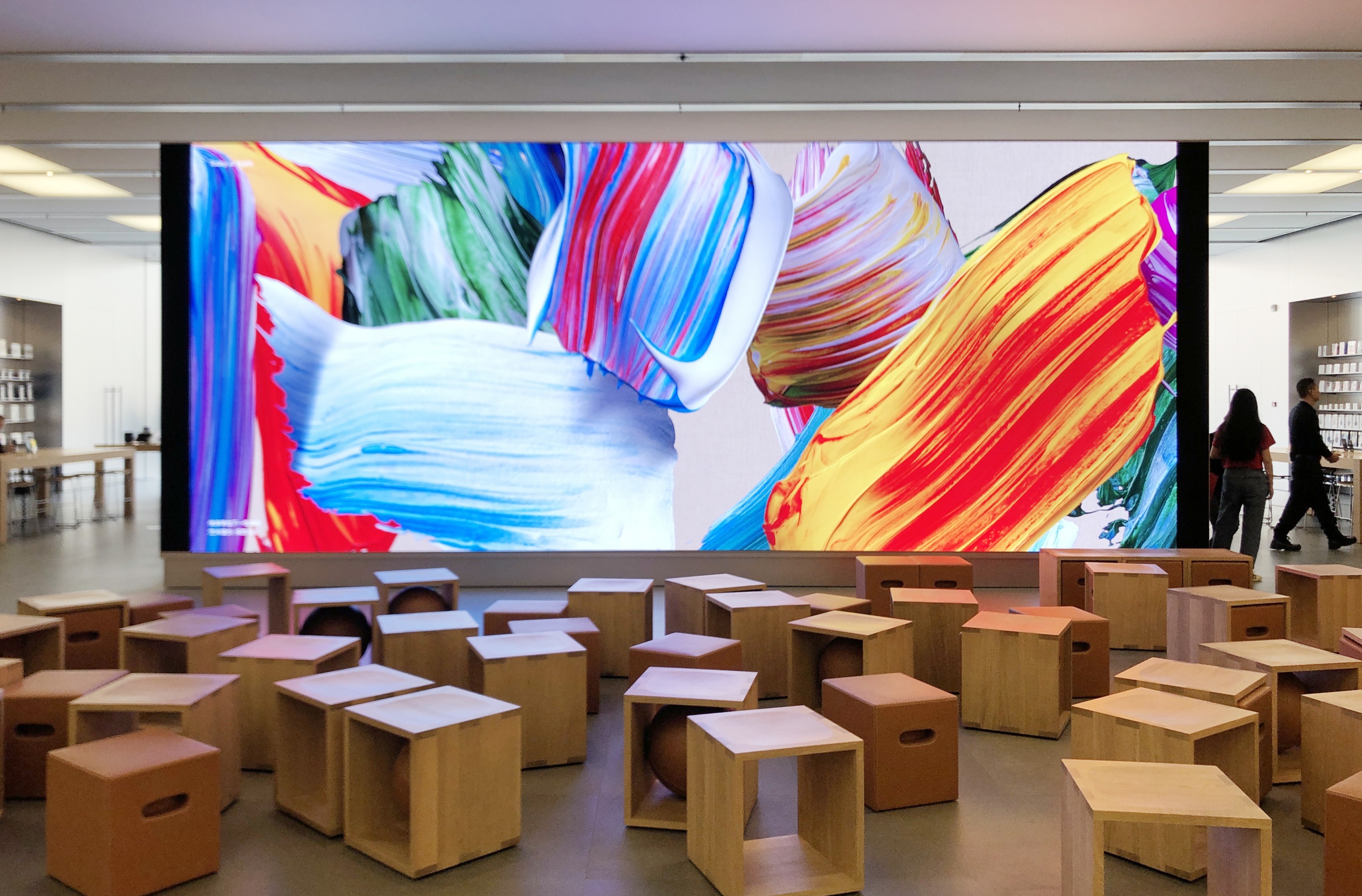 As of publication, three stores globally are closed for video wall upgrades: Passeig de Gràcia, Bondi, and Pioneer Place. Three locations in the U.S. have already completed their renovations this year: Leawood, Summerlin, and Easton Town Center. At least six others across the world have active construction underway: Knox Street, Highpoint, Amsterdam, Broadway, Eldon Square, and Fashion Show. More than 70 video walls should be installed by the end of 2019. 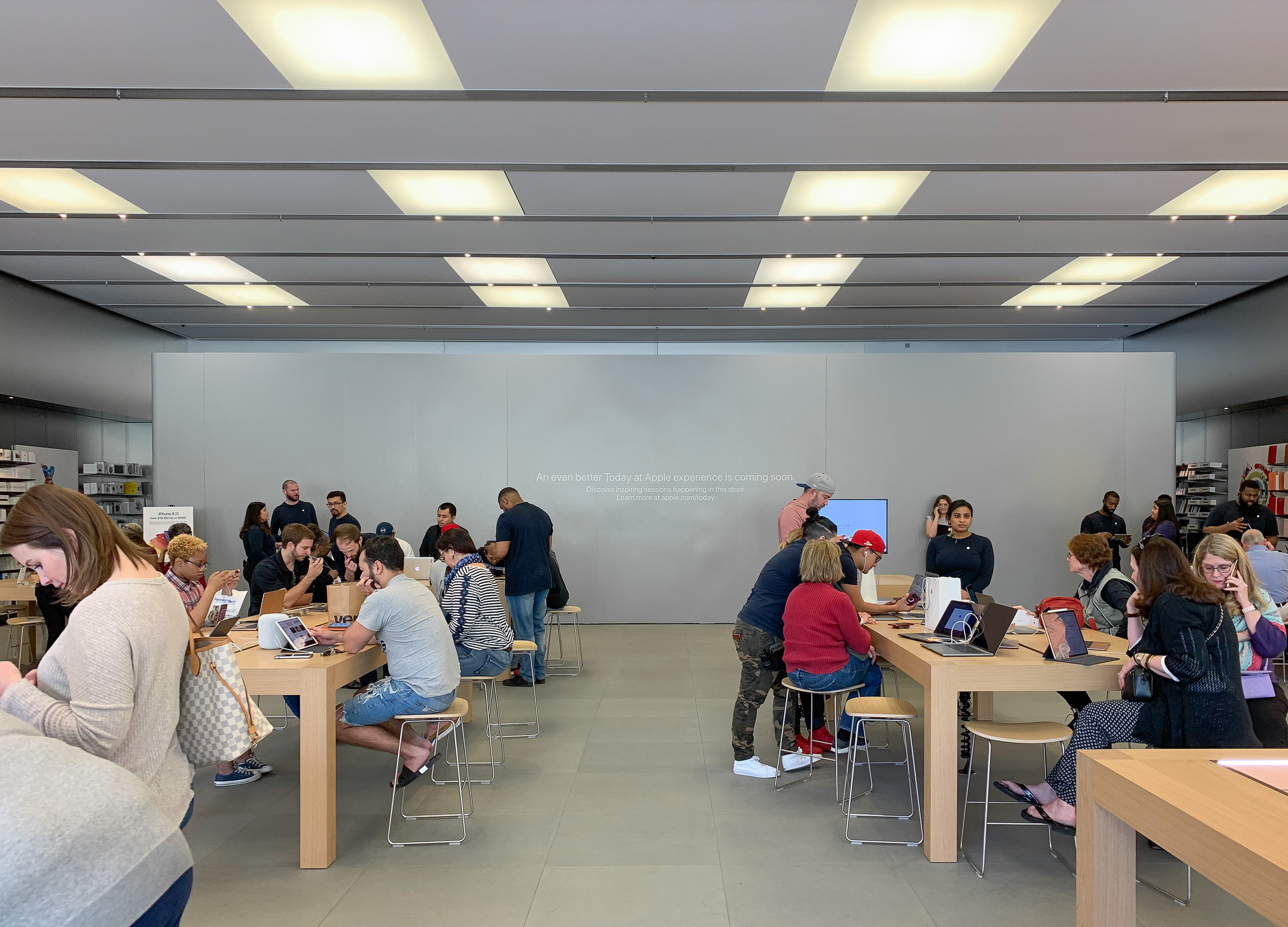 Finally, a rumor from The Evening Standard notes that Apple may be planning an all new retail location at London’s Knightsbridge Estate. Details are scarce, but the report specifies a 20,000 square foot store located between Harrods and Harvey Nichols in the luxury shopping district. The estate is currently being redeveloped by Chelsfield Group, and will house “six spectacular flagship stores” on Brompton Road and Sloane Street.

Thanks for the tips, Alec!