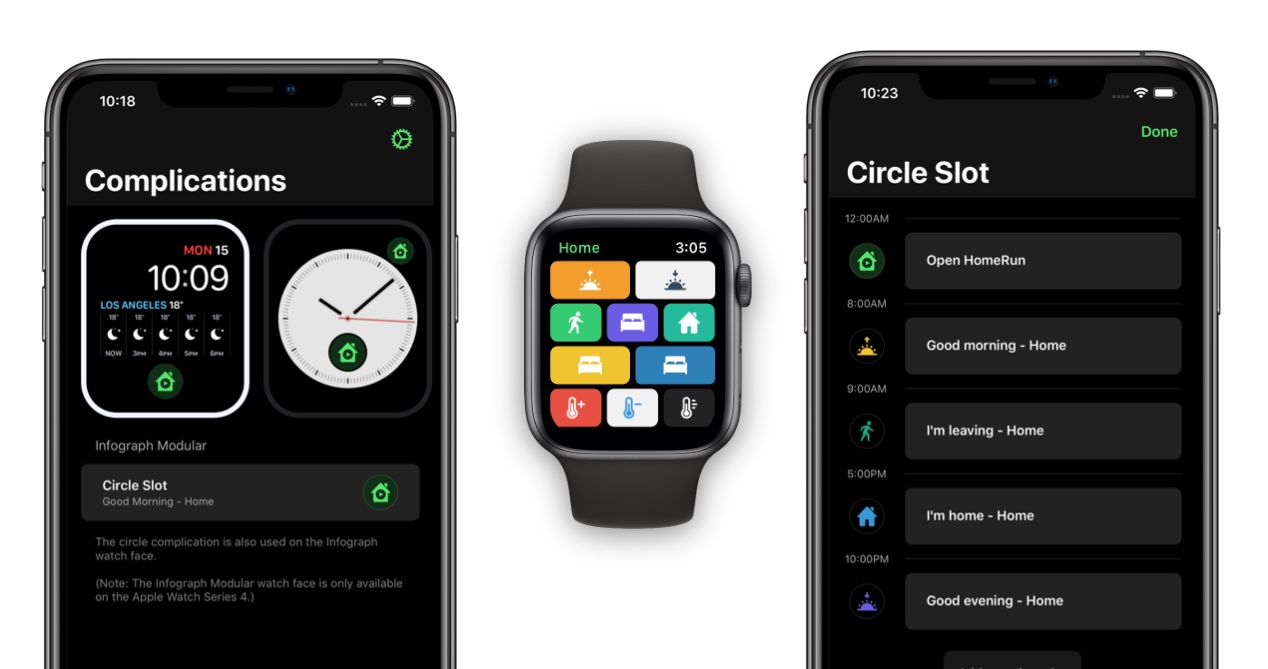 As standard, Apple offers a single static Home app launcher complication for the Apple Watch. HomeRun is an Apple Watch app that lets you set individual scenes as complications, just tap to run a scene.

We first covered HomeRun when it launched last year. Today, HomeRun 1.2 adds a handy new dynamic: you can set up complications that automatically change based on time. With some scheduling, you can make a single complication slot contextually relevant across the entire day.

With the new version of HomeRun, one complication slot can represent multiple scenes. In the HomeRun iPhone app, you arrange your schedule of scenes across a 24-hour period. For each slice of time, you pick which icon to show on the complication and which corresponding scene you want to activate.

You could set fine-grained hour-by-hour shortcut changes, but most users are going to benefit from setting up a simpler daily routine schedule with a couple of scene changes across the whole day. For instance, you might have an early morning scene, an action for when you leave to go to work, and then a couple of afternoon scenes appropriate for evenings and bedtime.

An average user is probably going to have three or four time-based customizations as appropriate; typically centred around waking up, morning, lunch, afternoon, evening, and sleep.

It would be nice if schedules could also differentiate between days, like weekdays and weekends, but that level of granularity is not available. Regardless, hours-in-a-day easily covers >90% of the use cases.

In addition to the new complication features, HomeRun 1.2 attempts to add richer support for the Siri Watch Face than what the stock Home app contributes, with the ability to configure which scenes to show for contextual situations like morning, evening, home, work, gym, and school. Due to the way the Siri Watch Face works, it is still ultimately up to watchOS to decide if the user is currently in one of these relevancy situations and the system presents these shortcuts in the timeline.

HomeRun is available in the App Store for $2.99.