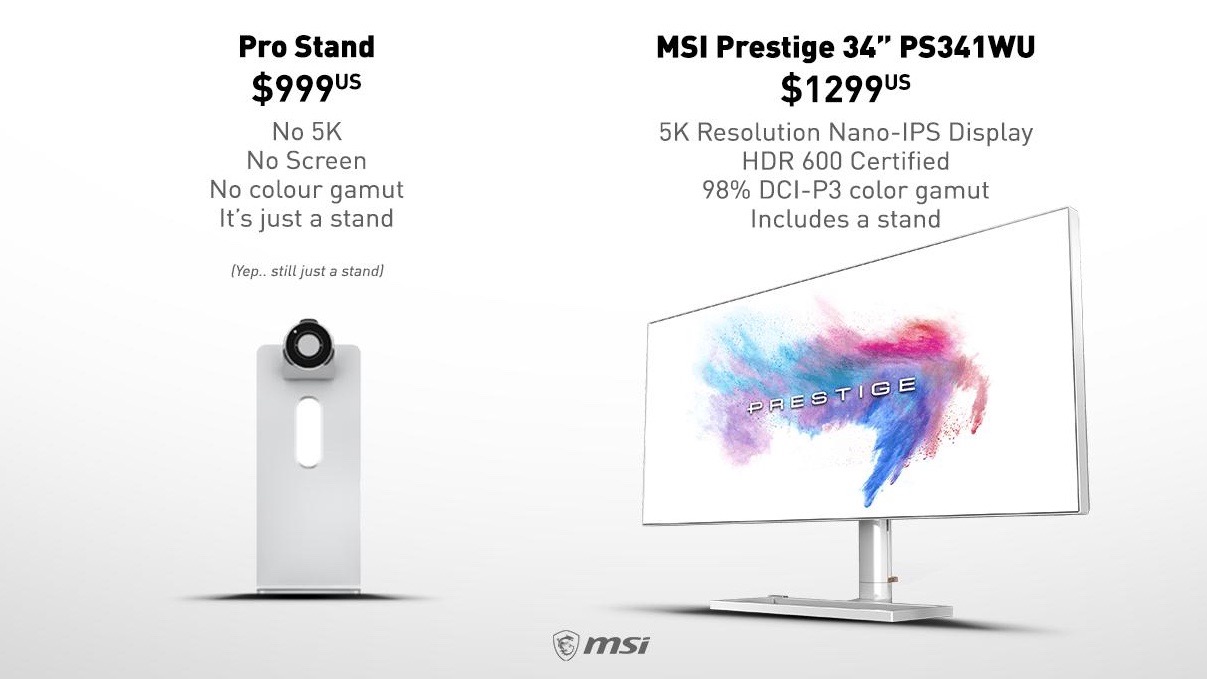 Apple has been getting a lot of criticism for its $1,000 optional stand for the upcoming Pro Display XDR. Now, hardware manufacturer MSI is making fun of Apple as it promotes its latest 5K display.

MSI shared an ad on Twitter for its 5K Prestige Monitor that takes a page from Apple’s popular “I’m a Mac” campaign from several years back and mocks Apple’s $1,000 Pro Display XDR stand.

MSI’s 34-inch Prestige display isn’t available yet (expected in 2020), but the company took the opportunity to make its upcoming display look very reasonably priced at $1,300 compared to Apple’s $1,000 stand.

However, as you’d expect, the MSI Prestige won’t offer near the same level of specs and performance that Apple’s 6K 32-inch Pro Display XDR will. The Prestige does have a slightly larger display at 34-inches, but notably, it’s not a true 5K panel. It’s actually a 5K2K resolution (5120 x 2160), uses USB-C instead of Thunderbolt 3, has a clunky plastic build (see photos below), and lacks a host of professional specs and other features found on the Pro Display XDR.

That said, MSI’s ad may appeal to the market of users who don’t really need all that Apple’s professional display offers and are looking for a middle ground. 9to5Mac’s Jeff Benjamin previously reviewed LG’s 5K2K 34-inch UltraFine display that’s similar to what MSI will soon offer (but with Thunderbolt 3) and can be found for close to $1,000 on Amazon.

As we previously mentioned, Apple would have likely avoided a lot of this backlash if it had just included the stand in the price and announced the Pro Display XDR as a $6,000 monitor instead of a $5,000 one.

From what I’ve heard, the Pro Display XDR is even more beautiful in person. The MSI Prestige, not so much. Giant bezels, cheap plastic everywhere, no cable management, etc. Their marketing shot is so misleading. (I was genuinely thinking it might be a decent alternative… 🤣) https://t.co/WxOsWaVJ6j pic.twitter.com/WBSNRornxE