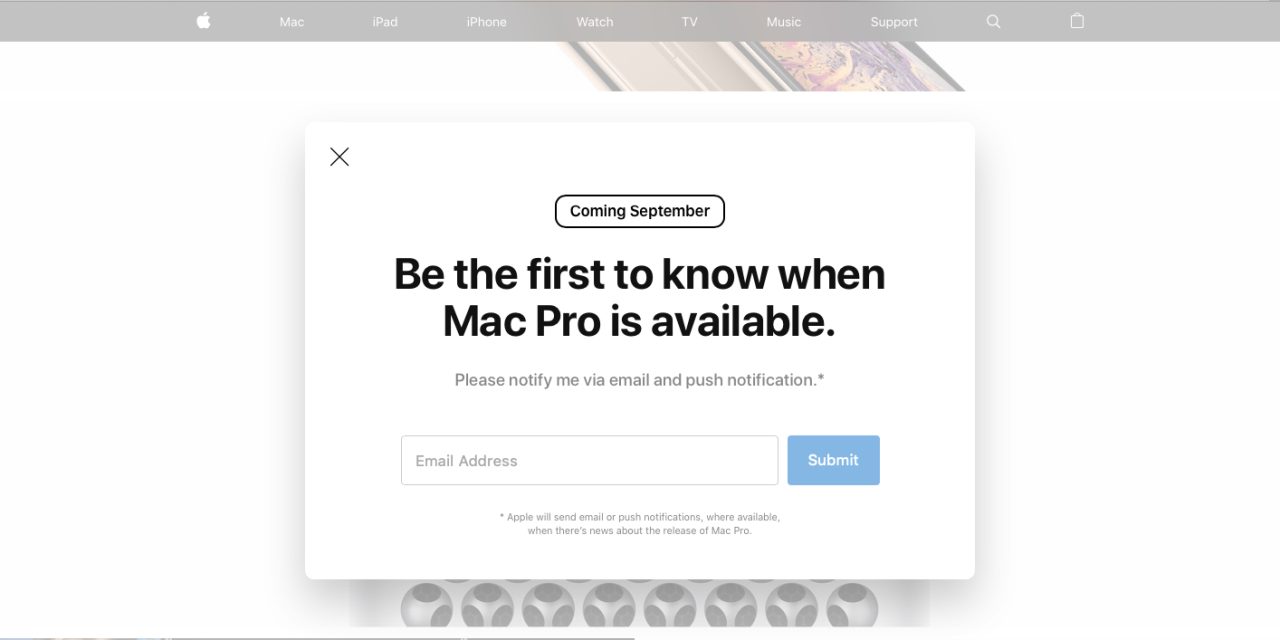 Update: The copy has been changed to ‘Coming This Fall,’ hinting that the September mention was indeed an error.

When Apple announced the Mac Pro and Pro Display XDR last week, the company would only say that the products are launching this ‘fall’. The fall date was noted in both Apple’s keynote and press releases.

However, if you look at the Apple homepage right now, there’s a link to get notified about forthcoming Mac Pro news. If you click that link, a box appears that readily states the new Mac Pro is coming in September.

The ‘Coming September’ copy is only seen in the notification modals from the homepage. If you use the ‘Notify me’ link on the apple.com/mac-pro/ product page, the callout says the expected ‘Coming This Fall’ message.

End-of-year launches for Apple’s professional Mac products are not atypical. Both the 2013 Mac Pro and the 2017 iMac Pro launched in the second half of December in their respective years of debut. ‘Fall’ technically ends on December 20, so a September launch for the 2019 Mac Pro would be sooner than many expect.

In all likelihood though, this is probably just a result of human error, albeit any mistake is slightly embarrassing for one of the world’s biggest companies. Apple clearly did not want to commit to a specific date for the new Mac Pro at WWDC.

Perhaps Apple originally planned to announce a September release timeframe but backed off to something less specific and the web marketing teams did not update all their resources accordingly.

It would certainly be prudent for Apple not to overpromise products with the very public failure of the AirPower project only a few months old in everyone’s minds.

We have contacted Apple to confirm if the wording is indeed a mistake.

Thanks Alireza for the tip-off.