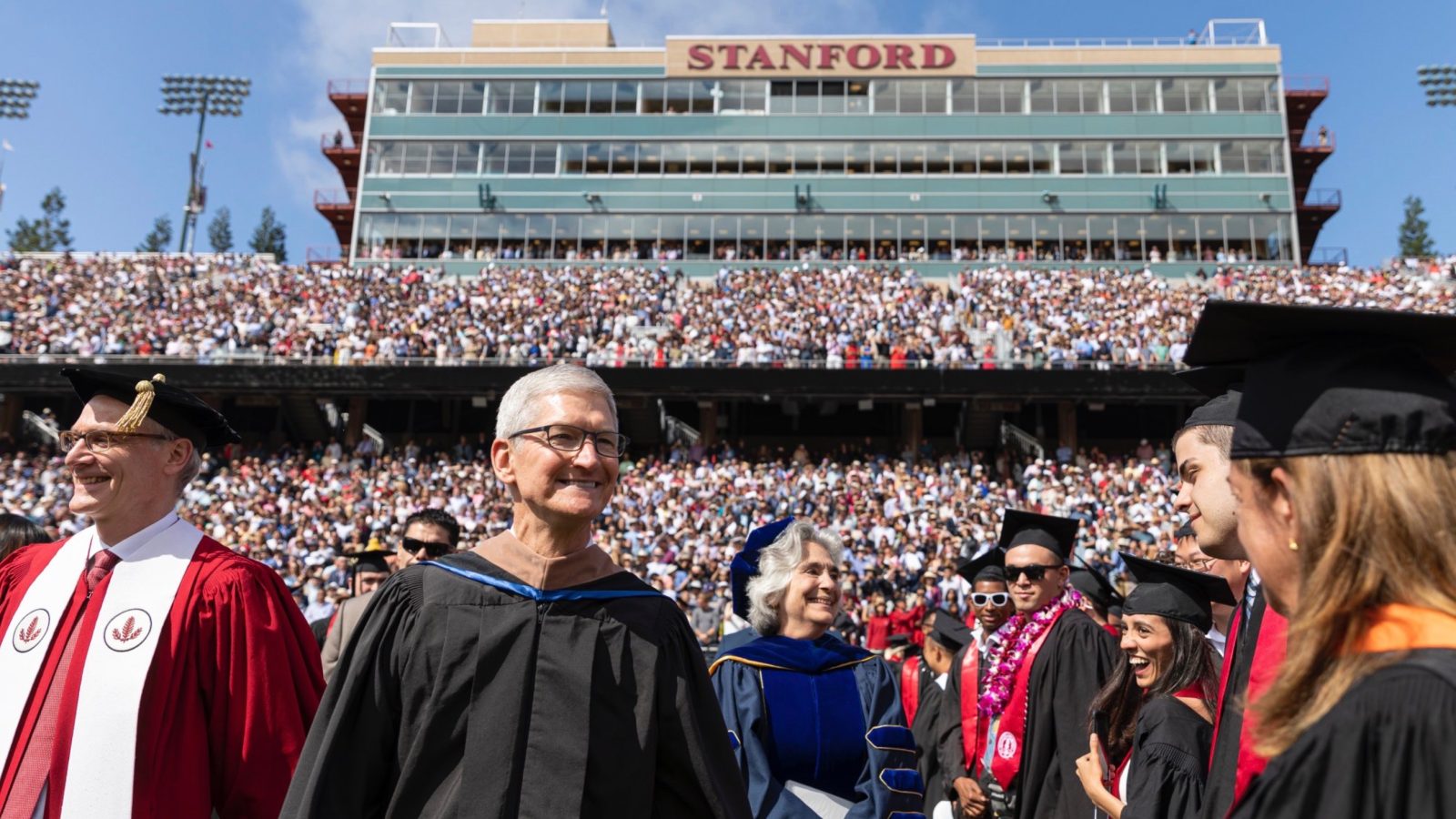 Tim Cook’s speech at Stanford today was made even more notable by the fact that Steve Jobs, a college dropout, delivered the commencement address at the school 14 years ago. Cook referenced this during his speech today. The Apple CEO explained that Stanford and Silicon Valley have long been woven together, but that recent events demand some reflection.

Stanford and Silicon Valley’s roots are woven together. We’re part of the same ecosystem. It was true when Steve stood on this stage 14 years ago. It’s true today and presumably it will be true for awhile longer still. The past few decades have lifted us together. But today, we gather at a moment that demands some reflection.

Fueled by caffeine and code, optimism and idealism, conviction and creativity, generations of Stanford graduates – and dropouts – have used technology to remake our society. But I think you would agree that lately the results haven’t been neat or straightforward. In just the four years you’ve been here at the farm, things feel like they’ve taken a sharp turn. Crisis has tempered optimism, consequences have challenged idealism, and reality has shaken blind faith. And yet we are still drawn here. For good reason; big dreams live here as do the genius and passion to make them real.

Cook said that Silicon Valley is responsible for numerous revolutionary inventions, but that lately, the industry is becoming known for people claiming credit without claiming responsibility. “We see it everyday now, with every data breach, every privacy violation, every blind eye turned to hate speech, and fake news poisoning our national conversation,” Cook said.

Whether you like it or not what you build defines who you are. If you build a chaos factory you can’t deny responsibility for the chaos. There are few areas where this is more important than privacy. If we accept this normal and unavoidable that everything can be aggregated, sold, or even leaked in the event of a hack, then we lose so much more than data. We lose the freedom to be human.

In a world without digital privacy, even if you have done nothing wrong other than think differently, you begin to censor yourself. Your generation ought to have the same freedom to shape the future as the generation that came before. Graduates, at the very least, learn from these mistakes. If you want to take credit, first learn to take responsibility.

Congratulations to the Stanford Class of 2019! It was an honor to celebrate with you today! 🎓 Be different. Leave something worthy. And always remember that you can’t take it with you. You’re going to have to pass it on. #Stanford19 pic.twitter.com/GwW5UHslXD

Cook also encouraged Stanford graduates to be builders – and to recognize the fact that their life’s work will one day be bigger than they are. Cook personally explained that he is incredibly thankful for what those at the Stonewall Inn had the courage to build nearly 50 years ago:

Whatever you do with your life, be a builder. You don’t have to start from scratch to build something monumental. And conversely, the best founders, ones whose creations last, and whose reputations grow rather than shrink with passing time, they spend most of their time building piece by piece. Builders are comfortable in the belief that one day their life’s work will be bigger than them. Bigger than any one person. They’re mindful that their effects will span generations. That’s not an accident, and in a way, it’s the whole point.

In a few days, we will mark the 50th anniversary of the riots at Stonewall. When the patrons of the Stonewall Inn showed up that night, people of all races, gay and transgender, young and old had no idea what history had in store for them. It would have seemed foolish to dream it. It was just another instance of the world telling them they ought to feel worthless for being different. But the group gathered there felt something strengthen in them. A convicting that they deserved something better than the shadows and better than oblivion. And if it wasn’t going to be given, then they were going to have to build it themselves.

I was 8 years old and a thousand miles away when Stonewall happened. There were no news alerts, no way for photos to go viral, no mechanism for a kid on the Gulf Coast to hear these unlikely heroes tell their stories. Greenwich Village may have well as been a different planet; though I can tell you that slurs and the hatred was the same. What I would not know for a long time was what I owned to a group of people in a place I’d never been. I will never stop being grateful for what they had the courage to build.

Cook referenced Steve Jobs’ speech as well, offering a corollary to what Jobs said during his address:

That brings me to my last bit of advice. 14 years ago, Steve stood on this stage and told your predecessors, “your time is limited, so don’t waste it living someone else’s life.” Here’s my corollary: You mentors may leave you prepared, but they can’t leave you ready.

As for Jobs’ passing, Cook explained that he was initially in disbelief that Jobs wouldn’t be leading Apple for many years to come. Cook said that after Jobs’ death, he was “the loneliest” he’s ever felt in his life:

When Steve got sick, I had hardwired my thinking to belief that he would get better. I not only thought he would hold on, I was convinced down to my core that he’d still be guiding Apple long after I myself was gone.

Then one day he called me over to his house and told me that it wasn’t going to be that way. Even then, I was convinced he would stay on as chairman. That he would step back from the day-to-day, but always be there as a sounding board. But there was no reason to believe that. I never should have thought it. The facts were all there. And when he has gone, truly gone, I learned the real visceral difference between preparation and readiness. It was the loneliest I’ve ever felt in my life by an order of magnitude.

It was one of those moments where you can be surrounded by people, yet you don’t really see, hear, feel them. But I could sense their expectations. When the dust settled, all I knew was that I was going to have to be the best version of myself that I could be. I knew that if you got out of bed every morning and set your watch by what other people expect or demand, it’d drive you crazy. So what was true then is true now. Don’t waste your time living someone else’s life. It takes too much mental effort; effort that should be dedicated to creating or building.

In closing, Tim Cook encouraged Stanford graduates to be different and leave something worthy – and know that they will one day have to pass it on:

Graduates, the fact is, when your time comes, and it will, you’ll never be ready. But you’re not supposed to be. Find the hope in the unexpected. Find the courage in the challenge. Find your vision on the solitary road. Don’t get distracted. There are too many people who want credit without responsibility. Too many who show up to the ribbon cutting without building anything worth ta damn.

Be different, leave something worthy, and always remember that you can’t take it with you. You’re going to have to pass it on.

Tim Cook’s full commencement address at Stanford can be viewed below.