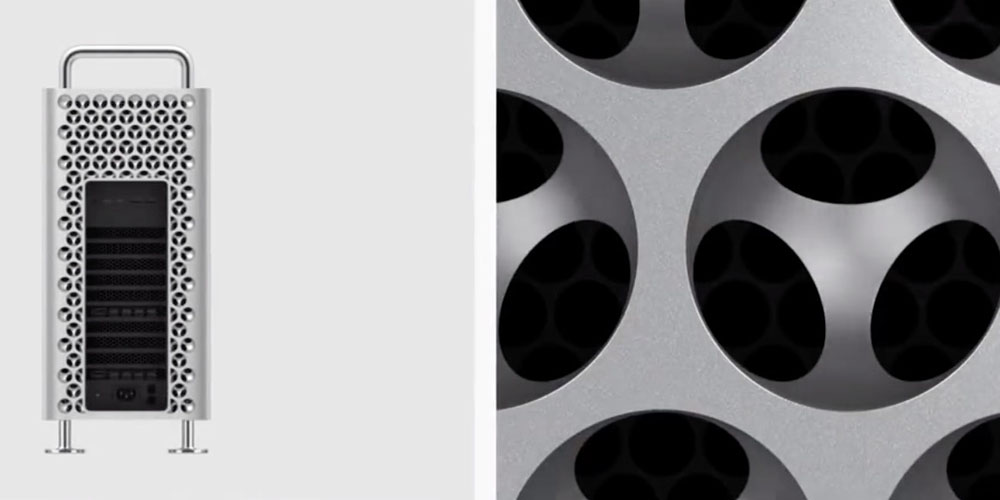 One of our readers made a good spot: a reference in a 2015 New Yorker piece which suggests that the clever Mac Pro vent holes were based on a variation of a design the company casually shared with a journalist at the time, not necessarily knowing then how it would be used …

The piece was a profile of Jony Ive, but its author Ian Parker also got to meet two of Jony’s design team, Jody Akana and Bart André. It was the latter who showed an example of things the play around with.

Ive went off to make some calls, and André described his own routine: he tends to arrive at five or six in the morning, and often then designs geometrically complex objects that he asks the machinists to mill. He called it a hobby, but, as Akana explained, “We’ll have a meeting about a speaker-hole pattern, or something, and Jony will say, ‘Bart, can you get your box of patterns?’ ”

André agreed to fetch, from his desk, something that he had been using as a coaster. Made of hard white ABS plastic—the material of Legos, and of thousands of Apple studio models a year—it was a disk punctured by evenly arranged holes. Or, as André put it, “There’s a hexagon pattern of negative shapes that are subtracted from the material from one side, and then there’s the same pattern, subtracted from the material from the other side. But it’s offset, so that the intersection between the two subtractions makes interesting shapes.”

The Mac Pro vent holes are circular rather than hexagonal, but the three-dimensional lattice pattern is very much along the lines of what is described here.

An earlier iteration can be seen on the G4 Cube, though that was a simple two-dimensional design.

Apple first showed off the new modular Mac Pro design and its companion Apple Pro Display XDR at WWDC. The vent holes are one part of a clever thermal management system.