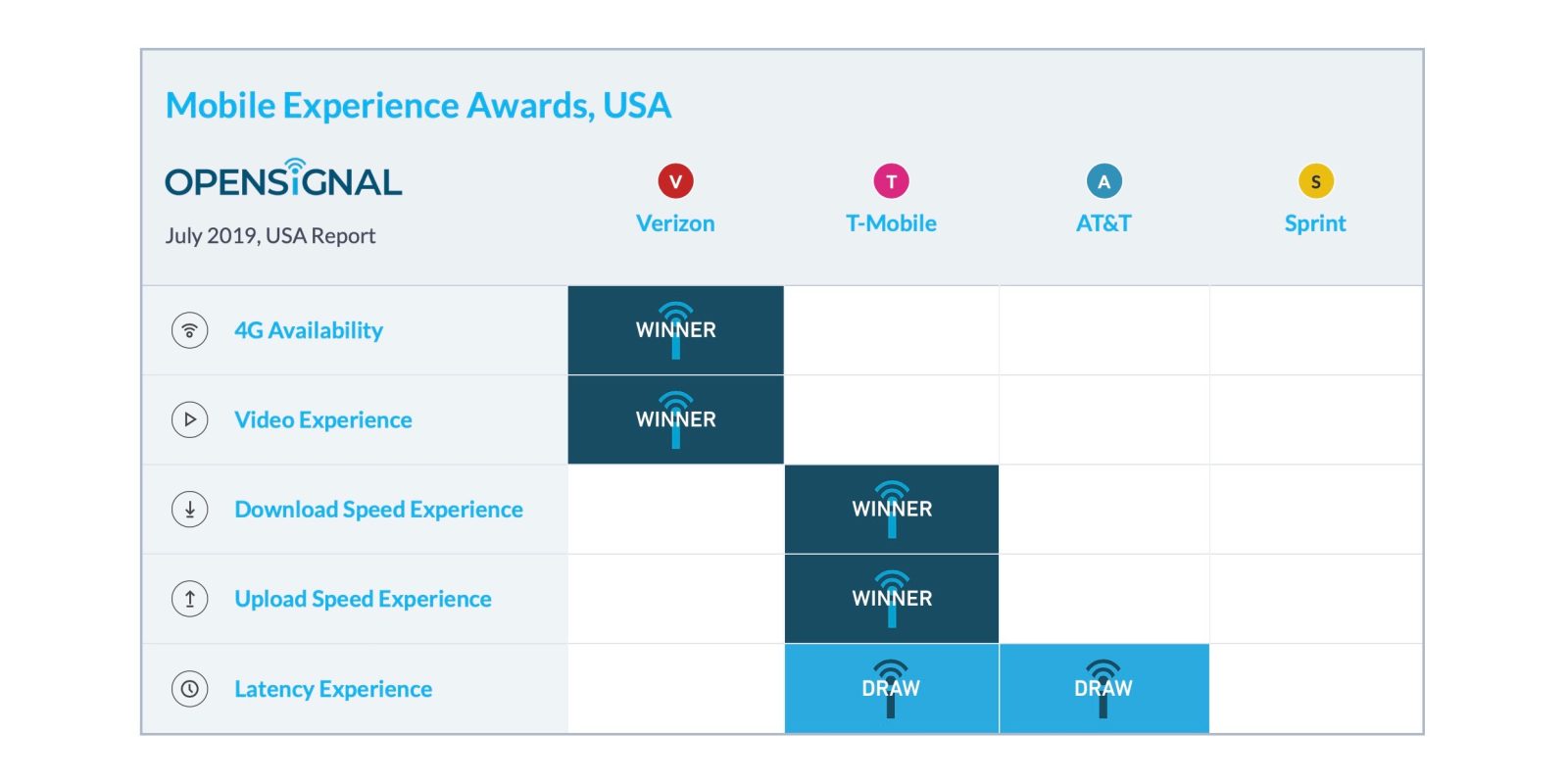 A new cellular network study from OpenSignal published today takes a look at how the four major US carriers stack up across five key attributes. Verizon took the top spot for best LTE network availability, T-Mobile had both the fastest download and upload speeds, while AT&T tied for lowest network latency. Read on for all the details about how the carriers performed.

OpenSignal’s latest study is made up of 5.6 million measurements from 1.4 million smartphones in the US between March and June of this year.

Even though the 5G era is approaching, investment in 4G hasn’t stopped. In this report we’ve seen some of the biggest movement in our metrics in years. 5G will be the new name of competition in the ensuing years, but that hasn’t stopped operators for distinguishing themselves in their 4G capabilities.

It’s likely no surprise that Verizon took the top spot for the best 4G availability. 94.8% of the carrier’s customers from the survey had access to an LTE connection. However, T-Mobile beat out AT&T for second place with 94.2% of users in the study able to get a 4G connection. AT&T and Sprint scored roughly five percentage points lower for 4G availability.

AT&T, Verizon, and T-Mobile all ended up neck and neck when it came to average download speed, but T-Mobile took top honors with 23.6 Mbps. Sprint brought up the rear with a 19.2 Mbps average.

T-Mobile was number one here again with a 7.3 Mbps average upload speed. Verizon was a close second with 6.9 Mbps, and performance dropped off for AT&T and Sprint in third and fourth places, respectively.

Network latency is the one category in which AT&T was able to perform at the top. However, the carrier tied with T-Mobile, with an average latency of 52 milliseconds.

OpenSignal notes in its study that video performance has never been a strong point for US carriers. However, this year, Verizon was able to earn a “Good” rating, with all the other carriers coming in with a “Fair” rating.

A good mobile video experience is made of multiple factors beyond just a network’s speed, which is why T-Mobile didn’t end up with the best video performance.

Video Experience is determined by many factors apart from speed, like consistency of connections, overall network capacity, and network latency. But one of the biggest contributors to the country’s lower video scores are the policies US operators have introduced to manage mobile data traffic.

Finally, the report discusses how city and regional performance is typically similar to the national results, but that this year’s study threw a few curve balls. Notably, AT&T came in first for download speed ahead of T-Mobile and Verizon in a number of cities.

Here’s the full list of how the carriers performed in 71 US cities/regions.