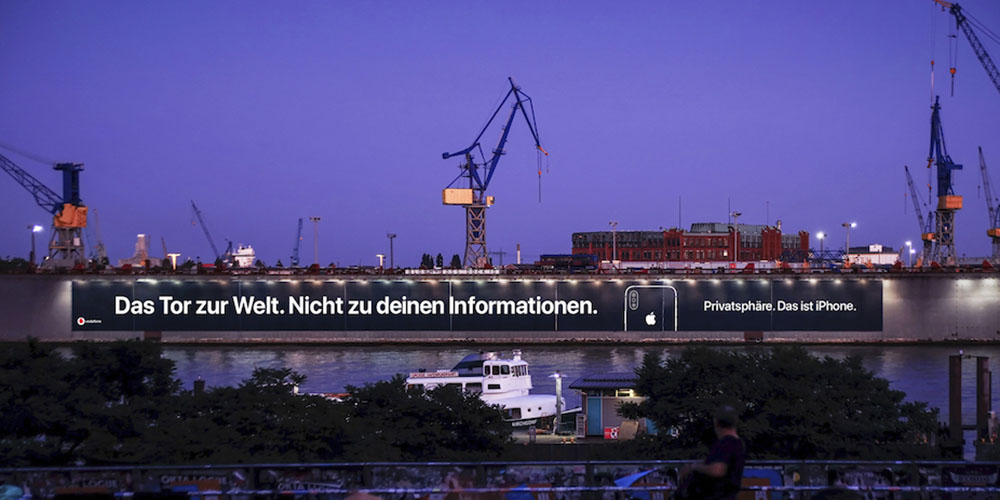 Next up was Canada, and again the billboards were tailored to the specific locations. One was directly outside an Alphabet company building, with the ad reading, “We’re in the business of staying out of yours.” The clear implication was that the same isn’t true of Google.

This was matched by another on King Street, reading simply, “Privacy is King.”

The German ad campaign was spotted by Macerkopf.

Hamburg’s port is a major international shipping center, with products from all areas of Germany being shipped abroad from there. The city proudly calls itself the “gateway to the world,” and Apple plays directly into this.

A second poster in the city proclaims, “Verrät so wenig über Hamburger wie Hamburger“: “Reveals as little about Hamburgers as hamburgers.”

Finally, one in Berlin. The city was originally divided into sectors, with East Berlin known as the Soviet sector, while West Berlin was divided into American, British, and French sectors. Apple plays on this language, with a billboard reading “Willkommen im sicheren Sektor“: “Welcome to the safe sector.”

We argued last year that it was time Apple really started to market privacy to mass-market customers:

I think Apple’s leadership has the same impression today that I did back in March. The company talks a lot about privacy, and assumes that message is getting through. CEO Tim Cook mentions privacy almost every time he speaks, and Apple has an entire microsite dedicated to explaining just how much importance the company places on protecting our data.

But Apple execs live in the same bubble you and I do. We read the tech press. We have friends who are techies. This stuff is obvious to us. It’s not at all obvious to non-techies. And they’ve never even seen that microsite […]

Apple needs to sell privacy with as much marketing skill as it does its “super-Retina screens” and “precision-machined, surgical-grade stainless steel.”

It seems someone in the company was listening.