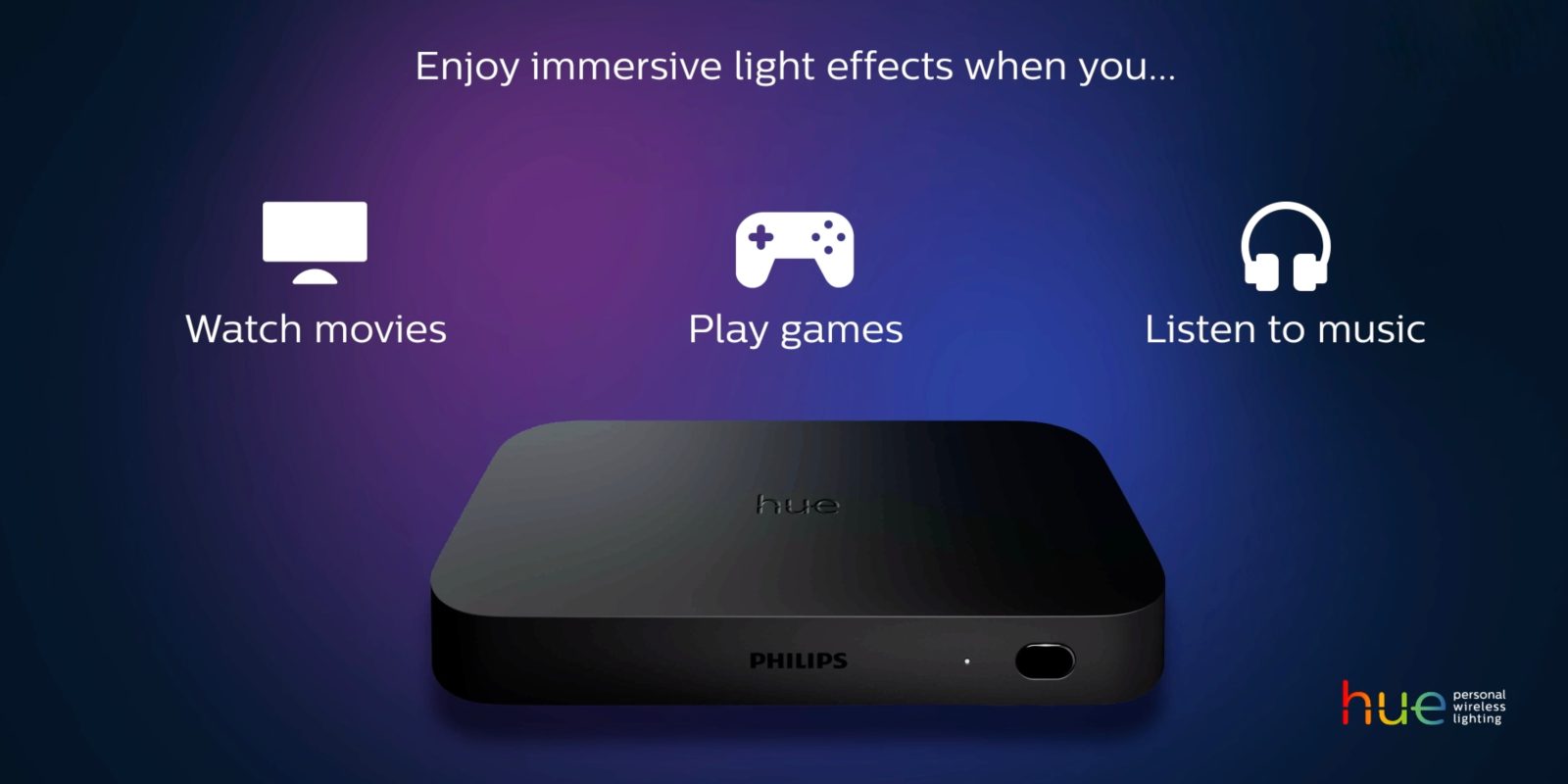 The newest Philips Hue product is slated for release soon and will allow users to sync up their smart lights and TV for a rich gaming and viewing experience. The Philips Hue Play HDMI Sync Box connects between your set-top boxes, game consoles, etc. and your TV to offer smart light effects that match what’s happening on screen.

Reported by The Verge, Signify is set to expand its Philps Hue lineup with the Play HDMI Sync Box next month. The publication got an early demo of the product and saw the potential for the new device.

I got to watch a room full of lights glow and flicker along with the trailer for Avengers: Endgame, with the colors rapidly changing to reflect what’s on-screen. It was a neat effect, and I can imagine it working great with certain experiences, like games or a horror movie.

The Hue Play HDMI Sync Box works by processing all of the video signal heading to your TV and analyzing the colors to communicate with and control your Hue smart lights. It also lets users sync lights with their music.

The new device supports 4K 60Hz and HDR 10, however, it’s lacking compatibility with HDR10+ and Dolby Vision. HDR10+ or Dolby Vision content will still play through the Sync Box but users won’t get syncronized smart lighting with those standards for now. The Hue Play HDMI Sync Box includes the ability to connect 4 HDMI devices.

One thing to keep in mind as The Verge’s Jacob Kastrenakes pointed out, if you buy the new Sync Box, you’ll probably want to limit the use of it to certain content.

But the trailer also showed me how this effect could become very tiring. Because a trailer is fast-paced and filled with rapid cuts, the lights were changing nonstop, to an almost disorienting degree. That won’t happen throughout the majority of TV shows or movies, but if you were to leave the device on while, say, commercials are airing, I can imagine it quickly growing tiring. (I watched with the lighting set to “intense mode”; the system’s “subtle” mode may have provided a less jarring effect. Light effects can also be turned off.)

The Play HDMI Sync Box to get your Hue smart lights paired with what’s on your TV comes after Philips released the Hue Sync app for Mac and Windows last year. That app also allows users to sync their smart lights with music in addition to video and games.

The Hue Play HDMI Sync Box is priced at $230 and is set for launch on October 15th. The product’s listing shows off the Sync Box used with the Hue Play light bars that can be placed or mounted behind a TV. However, the HDMI Play Sync Box will work with any of the colored Hue smart lights.