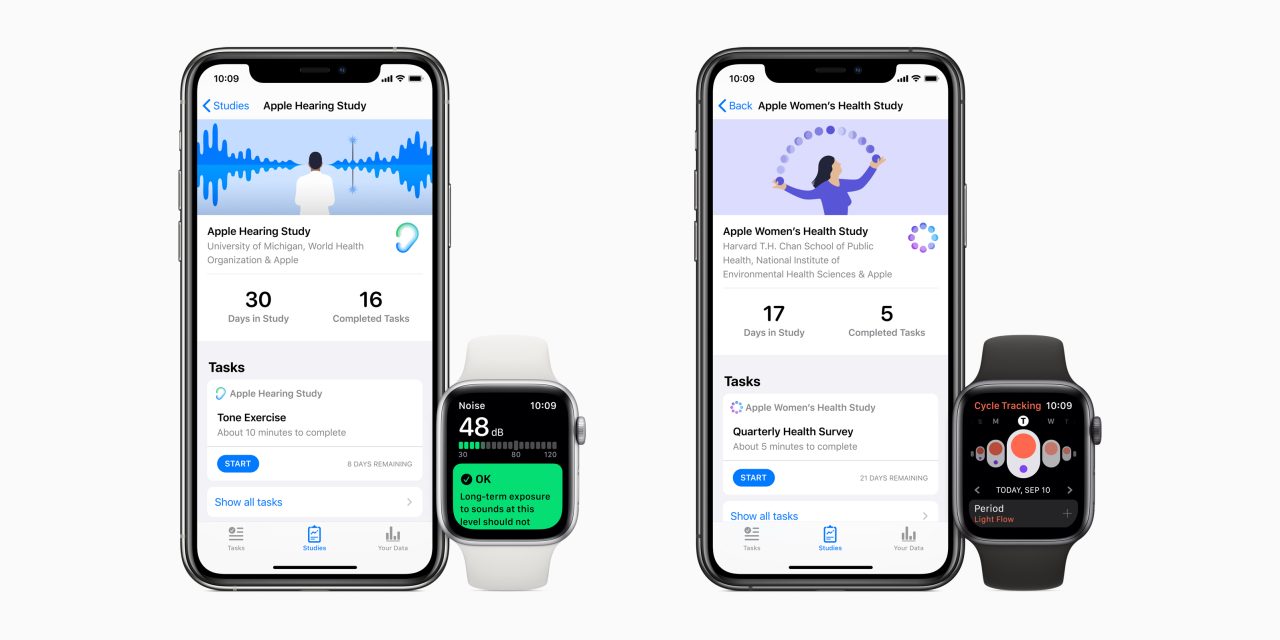 Following the announcement at the September event, the Apple Research app is now available to download for iPhone and Apple Watch. Users in the United States can sign up to be part of three health studies; Women’s Health, Heart and Movement, and the Hearing Study.

The Women’s Health study draws data from the Cycle Tracking app on watchOS 6 with the aim to improve scientific understand of menstrual cycles. The Heart and Movement Study uses a variety of signals from the watch, including movement and health rate information. The Hearing Study examines the impact of sound exposure on hearing health and stress levels.

The Research app can collect a variety of data types from the iPhone and paired Apple Watch, including movement, heart rate, and noise level data.

As always, Apple is promoting the privacy angle of its health efforts. Apple says the Research app will only share appropriate data with the studies that the user explicitly signs up to.

The new Research app builds on the foundational work of CareKit and ResearchKit, first introduced by Apple’s COO Jeff Williams in March 2015. Williams said the following in a press statement:

“Today marks an important moment as we embark on research initiatives that may offer incredible learnings in areas long sought after by the medical community,” said Jeff Williams, Apple’s chief operating officer. “Participants on the Research app have the opportunity to make a tremendous impact that could lead to new discoveries and help millions lead healthier lives.”

For the women’s health study, Apple is partnering with the Harvard T.H. Chan School of Public Health and the NIH’s National Institute. The new heart study is run in collaboration with the Brigham and Women’s Hospital and the American Heart Association. Finally, the hearing study is being run by the University of Michigan. Apple says it will also share data with the World Health Organization’s Make Listening Safe group.

If you have an iPhone and Apple Watch (Series 1 or later) and live in the United States, you can download the Research app today in the App Store and start participating in any or all of the new health studies. Apple plans to roll out additional studies through the Research app over time.