Apple and Microsoft surged in 2019, accounting for 15% of the stock market’s total gains

Apple’s 2019 got off to a rocky start when it was forced to issue a rare revision to its earnings forecast for the fiscal first quarter of 2019. Since then, however, AAPL stock has outperformed the rest of the market, with CNBC reporting that Apple and Microsoft together accounted for almost 15% of the S&P 500′s advance in 2019.

Another thing to keep in mind is that Apple and Microsoft’s success comes in an already strong year for the S&P 500. Depending on gains today, the S&P 500 could have its best year since 1997, CNBC reports:

The S&P 500′s 2019 gain is its best since 2013 and could be even more historic if stocks continue to gain on Tuesday. The benchmark is a percentage point away from having its best year since 1997. 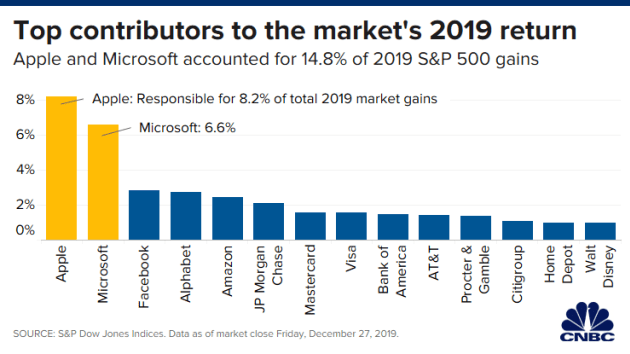 With their 2019 surge, both Microsoft and Apple sit about $1 trillion market capitalization valuations. Apple first accomplished that feat in August of 2018, but it bounced back and forth until this year. As we reported last week, AAPL’s 2019 performance is its best since 2009.

What about 2020? Analysts seem to have reached a consensus that the release of a 5G iPhone will spur a strong upgrade season. Apple’s wearables business, powered by Apple Watch and AirPods, is also expected to continue to grow. Apple is first expected to introduce a new low-cost iPhone model in early 2020, followed by the iPhone 12 lineup in the fall.

Apple hasn’t yet scheduled its Q1 2020 earnings release, which will cover the holiday shopping season, but we expect it to take place towards the end of January or early in February.