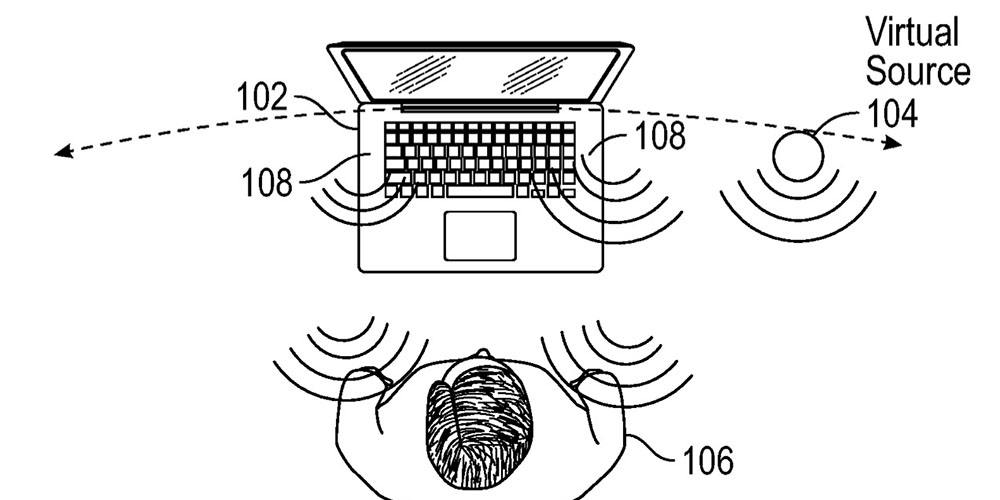 Apple’s augmented reality focus has so far been on iPhones and iPads, but AR on MacBooks may also be in the company’s sights. A new patent granted today could be useful for both conventional games and AR applications.

Apple’s previous patent, on a method of virtually positioning people in a room when listening through headphones, focused on a business application – but we noted at the time that AR seemed another obvious use.

Apple has been granted a patent for AR headphones, which enable you to hear where people are located within a room even when they are not physically present.

The patent positions augmented reality headphones as a business tool, ideal for listening to conference calls, but it’s not hard to imagine entertainment-based uses for the same tech.

The patent granted today, and spotted by Patently Apple, achieves the same thing with MacBook speakers.

A virtual acoustic system is one that gives the user the illusion that sound is emanating from elsewhere in an indoor or outdoor space than directly from a loudspeaker (e.g., one that is placed in a room, one that is built into a laptop computer, etc).

Audio signal processing for virtual acoustics can greatly enhance a movie, a sports even, a videogame or other screen viewing experience, adding to the feeling of “being there”.

It works by canceling crosstalk, which is a similar technique to noise-cancellation. At its simplest, Apple employs noise-cancellation on one side of the MacBook so that the sound appears to come from the other side.

Various known audio processing algorithms, executed by digital processors, modify one or more recorded, synthesized, mixed or otherwise produced digital audio signals in such a way as to position a virtual source according to modeling that is based on human perception of sound, including the role of ear acoustics, other reflecting and absorbing surfaces, distance and angle of source, and other factors […]

[For laptop speakers] a crosstalk canceler is employed in some virtual acoustic systems to produce sounds from multiple loudspeakers in such a way that for example a “left” audio signal is predominantly heard only at the left ear of the listener, and a “right” audio signal is predominantly heard only at the right ear of the listener (by virtue of sound wave cancellation in the air surrounding the listener.) This allows the left and right audio signals to contain spatial cues that enable a virtual sound to be “positioned” at a desired location between the loudspeakers.

But the patent describes supplementing this with a similar approach to the HomePod, where microphones pick up reflected sound and the speaker output can then be adjusted to suit the acoustic characteristics of the room. In this case, adjustments are made so that the combination of direct and reflected sound can be used to fool us into thinking the sound originates from a particular position off to one side.

Of course, direct AR applications on a MacBook would require a rear camera, but it’s possible that an iPhone could be used as the camera, while audio and video output is to a MacBook.