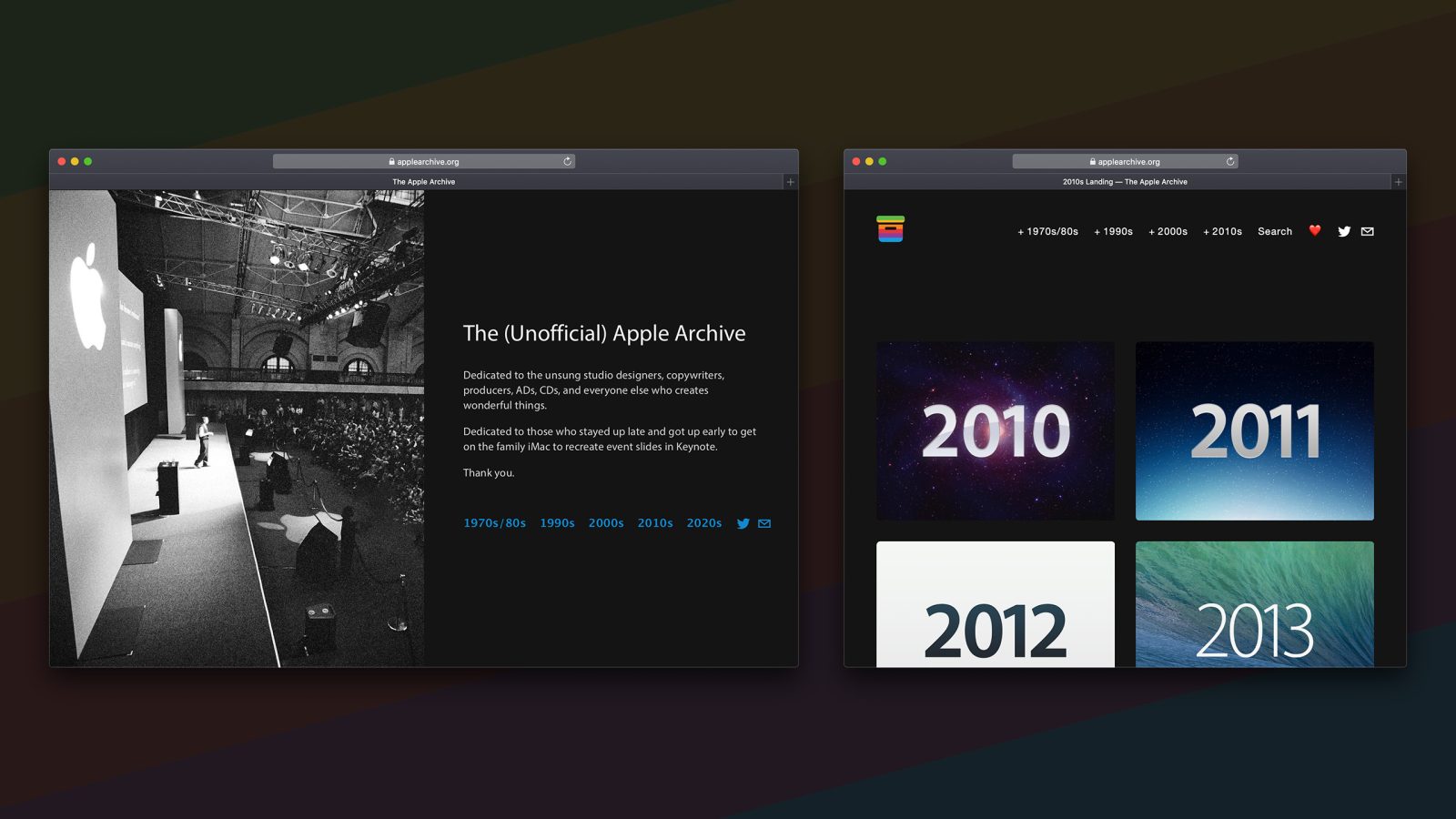 “I totally forgot that Rihanna was used as the track for an iPad 2 guided tour. What a weird year.” Sam Henri Gold was giving me a progress update on what would eventually become The Apple Archive. He had just made it to 2011. Compiled from hundreds of videos and images spanning Apple’s near 44-year history, the collection is believed to be one of the largest of its kind ever made available. It launches today.

Like Sam, I had no recollection of Rihanna’s introduction to the iTunes Store app on iPad 2. I wasn’t aware of the Apple Store demo loops for the Power Mac G4, either. But I am fond of the “Solar” spot that launched the first aluminum iMacs and helped spark my lifelong interest in Apple. And I could never forget the “Next Level Fun” ad for the third-generation iPod touch that I watched frame by frame and attempted to recreate in my basement as a teen with more time than resources.

That’s what The Apple Archive is all about. Sam hopes the collection he’s compiled will inspire the next generation of designers, developers, and Apple fans by preserving the company’s legacy of creativity. His first Apple product was a 2005 iPod nano, gifted to him on his fourth birthday. The rest, you might say, is history.

“The whole project began for me when the EveryAppleAds YouTube channel was taken down in April 2017,” Sam says. “I was away in Massachusetts at the time, so I just started by going on YouTube and typing in “apple commercial 1976,” downloading whatever I could, and stuffing the videos in an iCloud Drive folder. I only had a hundred or so videos when I started up a YouTube channel. I think it remained up for a whopping six days before my channel was abruptly removed without a trace. Had it remained up on YouTube, I think I would’ve neglected the archive a lot more than I have.”

In June 2019, Sam opened up an early version of his archive as a public Google Drive folder. But the project didn’t last. Traffic quotas and security vulnerabilities sunk the ship. A promising collaboration with The Internet Archive fell through when Sam needed to find a way to stop people from bulk downloading the entire collection. Now he’s landed on a solution that works. Vimeo provides a locked-down player to deter downloads and significantly less video compression than YouTube. The Apple Archive has never been about piracy. Its mission is preservation.

Finding content for the archive hasn’t been easy. YouTube is littered with unorganized duplicates and low-res uploads that have been distorted through an online game of telephone. Many of the clips and images were virtually lost to time until being resurfaced over the past year (have you ever seen the 2000 “Snowglobe” ad for the iMac G3?) Sam says these unreleased odds and ends are some of his favorite parts. “While I’m not willing to share how I’ve obtained them in order to protect my sources, they’ve been very accommodating to this very charming young man and his passion project,” he adds.

Now that The Apple Archive has a permanent home, complete with appropriately-styled title cards for each year in Apple’s timeline, Sam is undertaking several projects to expand and streamline the collection. Videos are being transcoded to save space and subtitles added for accessibility where Apple has already created .vtt files.

The full collection spans over 15,000 files and just under 1TB of data. PDFs, print ads, WWDC sessions, obscure clips from the ‘80s, and an unabridged collection of macOS and iOS wallpapers are among the additions still on the way. New content will be announced on Twitter.

Maintaining a project this large is costly in both time and resources, so Sam welcomes monetary donations to keep the archive running. Content donations are also appreciated. “I’m always looking for nice, higher resolution copies of anything. I’m even open to accepting physical media,” he adds. That invitation extends to creatives who’ve worked with Apple and may wish to anonymously donate material. 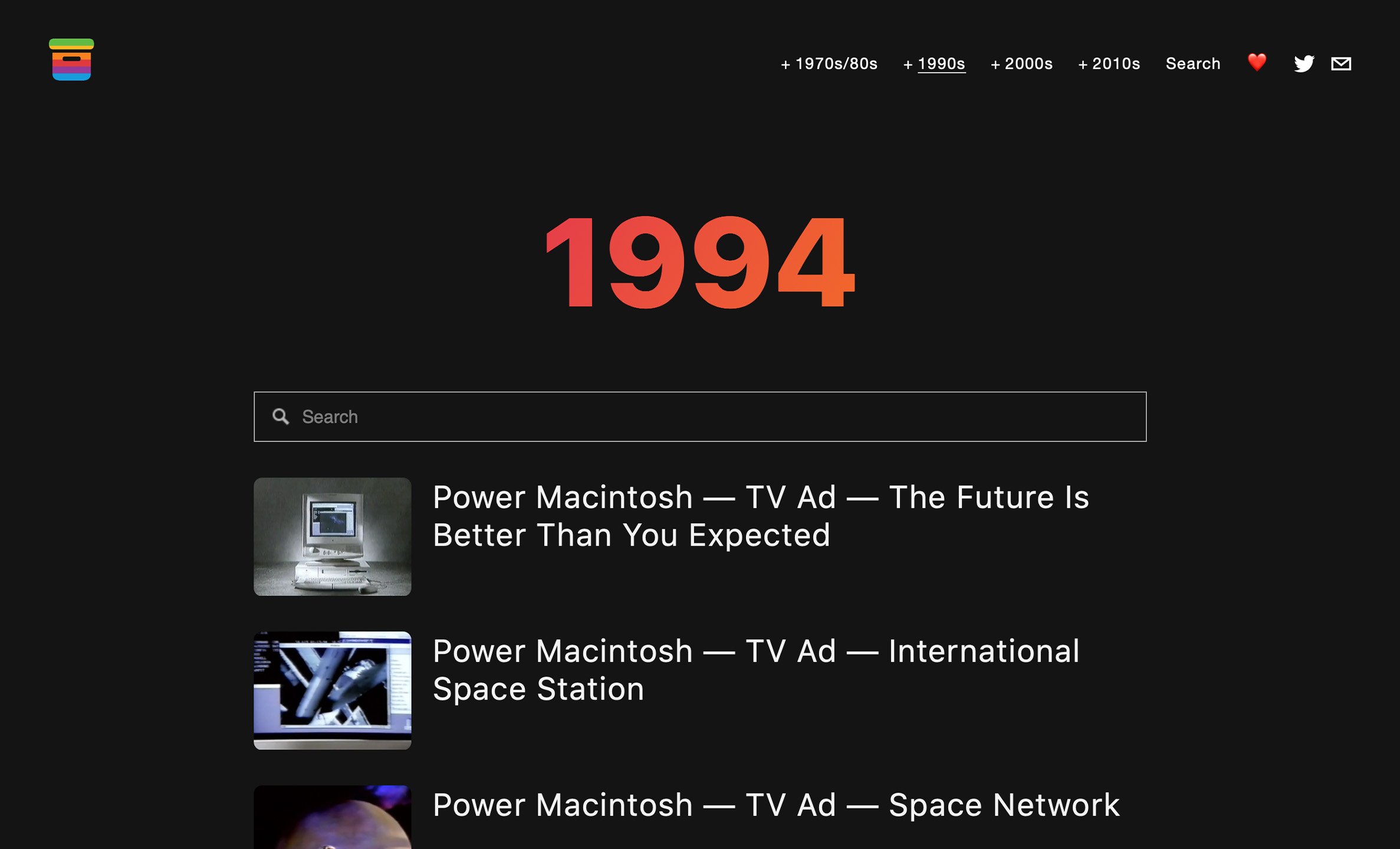 Sam knows his efforts could be rendered useless with one word from Apple. But he hopes the amicable and educational nature of the archive will keep it online, because the Apple community deserves no less.

“I think we’ve seen what a world without a public archive would look like, a world littered with tiny archive channels, maybe one or two god-awful screen recordings of keynotes with giant *UNREGISTERED HYPERCAM 2* watermarks. That’s not a world I want to live in. That’s not a world anyone should have to live in. When I got my nana’s 2006 iMac, I bought iWork solely to recreate Macworld keynotes I had watched on YouTube, right down to the slide transition. I don’t know if there are still kids that do that, but I hope this project and the past three years of file management hell I’ve put myself in will help that kid with their Stevenote re-creation.”

You can take a trip down memory lane and browse The Apple Archive here.