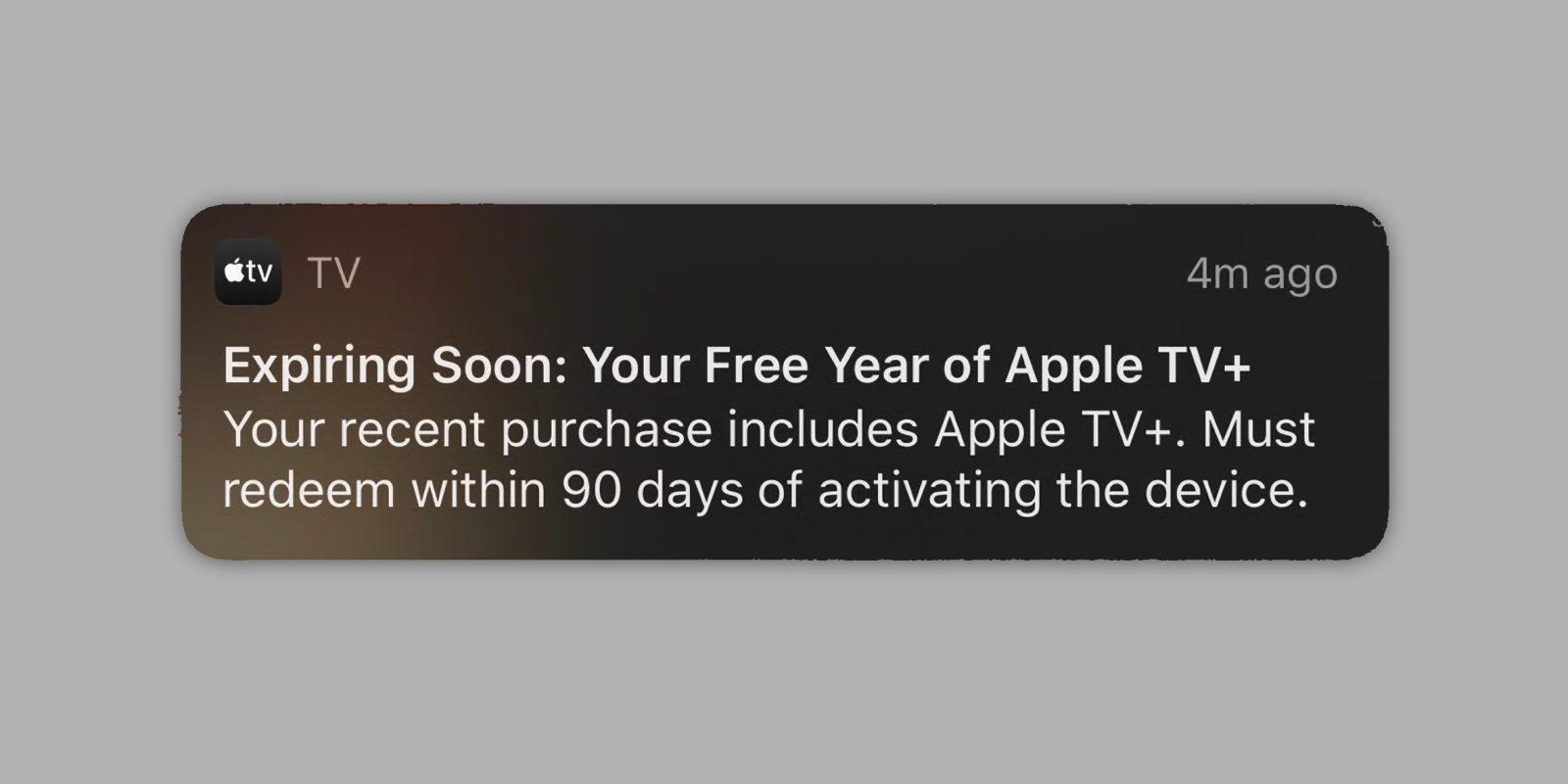 Apple has started sending out push notification reminders to users who are eligible to redeem a free year of Apple TV+, but have not yet done so.

The notification reads: “Expiring Soon: Your Free of Apple TV+”. Apple is also sending out email alerts in the same vein.

As a reminder of the terms of the free Apple TV+ deal, customers must activate the one year free trial within 3 months of activating their newly purchased device. Eligible device purchases include any iPhone, iPad, Apple TV, iPod touch or Mac purchased after September 10. So, a customer who buys a new Apple product today can activate Apple TV+ anytime between now and April.

If the product was bought before November 1st, then the three month window starts from that date. This includes people who bought an iPhone 11 or iPhone 11 Pro on day one, for example. In that case, the redemption period expires at the end of this month, January 31st. That means Apple is sending out these reminder alerts with about two weeks to go.

As you can imagine, Apple sold tens of millions of iPhones between September 10th and November 1st, so there are a lot of people in that first bucket with the same Apple TV+ offer expiration date of January 31st.

Remember, if you activate the free year offer, you are signing up for an auto-renewing subscription of $4.99/month when the trial ends. As cancelling the subscription also immediately cancels the free trial, you need to set a reminder in your calendar if you don’t want to be charged when the year is up. You can see the exact date when your Apple TV+ free year renews by looking at your Apple ID subscriptions. On an iPhone or iPad, you can find this in Settings -> [Your Name] -> Subscriptions. 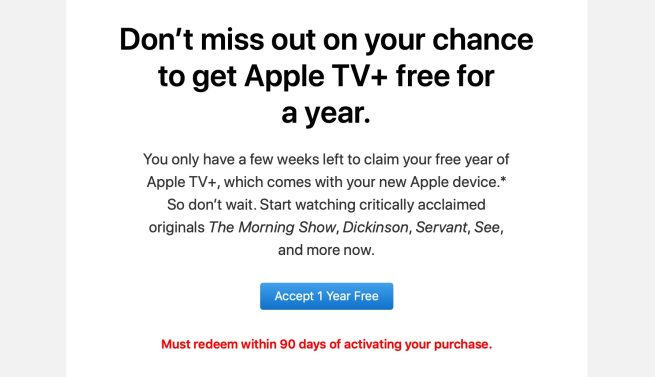 Unlike other streaming services, Apple has not bought up rights to a back catalog of content. Instead, Apple TV+ only offers originals … which naturally means they are starting with a much smaller number of titles compared to their streaming rivals. Apple TV+ currently features eleven original TV series and 2 films.

However, the company is investing billions into content production and is adding new shows on a monthly basis. Right now, there are six additional titles that have been officially announced with release dates within the next couple of months, and plenty more in the pipeline. Check out our Apple TV+ program guide for more information.

We are continuing to hear reports that some people are getting offered the free year even though they haven’t bought a new Apple product recently. This is leading to some confusion on social media about whether the emails and alerts are legitimate, or some kind of scam. As far as we can tell, all reports of this nature are accounting errors on Apple’s side, not anything malicious. If you see the offer in the Apple TV app, then go ahead and take advantage of it if you can.