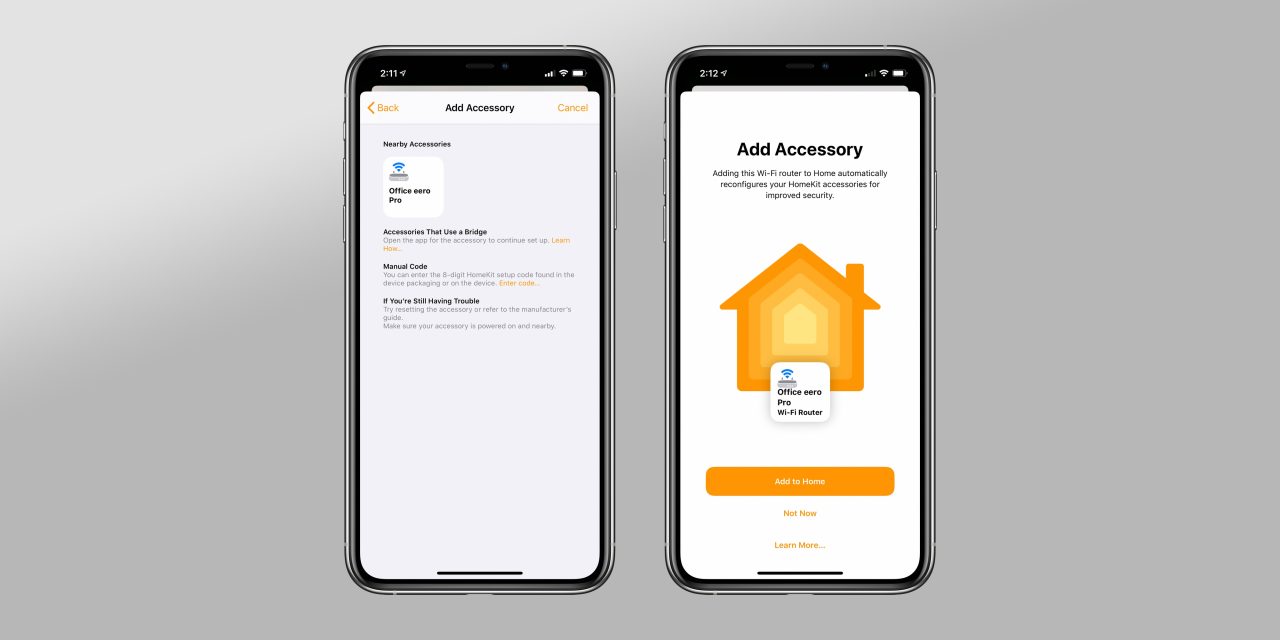 At WWDC 2019, Apple announced that HomeKit would soon be supported by routers from Eero, Linksys, and Charter Spectrum. Thus far, none of those companies have actually rolled out HomeKit support to their routers, but new evidence today suggests Eero support could be coming soon.

Eero today released an update for its Eero and Eero Pro routers, bringing them to version 3.18. The release notes for the update are relatively unexciting, highlighting “improvements to client data accuracy” and “system stability improvements.” As it turns out, however, this update also includes what appears to be preliminary HomeKit support (via Adam Miarka).

After updating to the latest firmware, the Eero and Eero Pro appear in the Home app as accessories you can add. Unfortunately, because there is no valid HomeKit setup code, the Home app presents an error and says the Eero routers can’t be added to HomeKit. The app also warns that Eero routers are still “uncertified” at this point.

With version 3.17 of the Eero firmware, Eero routers did not appear in the Home app as nearby accessories. It’s clear something has changed with version 3.18, but things are obviously still very early.

Furthermore, an Eero developer took to Reddit today to offer more details on what’s included behind the scenes in the update to version 3.18. Among other technical change, the developer teases a “(REDACTED) feature for (REDACTED) users,” describing it as “the biggy, but I’m not allowed to talk about it yet.”

So when will you be able to control and monitor your Eero router via the Home app? We still don’t have a release date on when the full capabilities will be released, but today’s evidence suggests Eero could beat Linksys and others to market.

Apple says HomeKit-enabled routers will offer security benefits, such as the ability to firewall off accessories, preventing them from accessing your entire network. “Enhance security by monitoring the network activity of your Home accessories and preventing unsafe connections,” Apple says.

Apple’s website currently lists the Eero, Eero Pro, and LIiksys Velop as the three routers slated to add HomeKit support at some point. Whether or not other manufacturers join in remains to be seen.