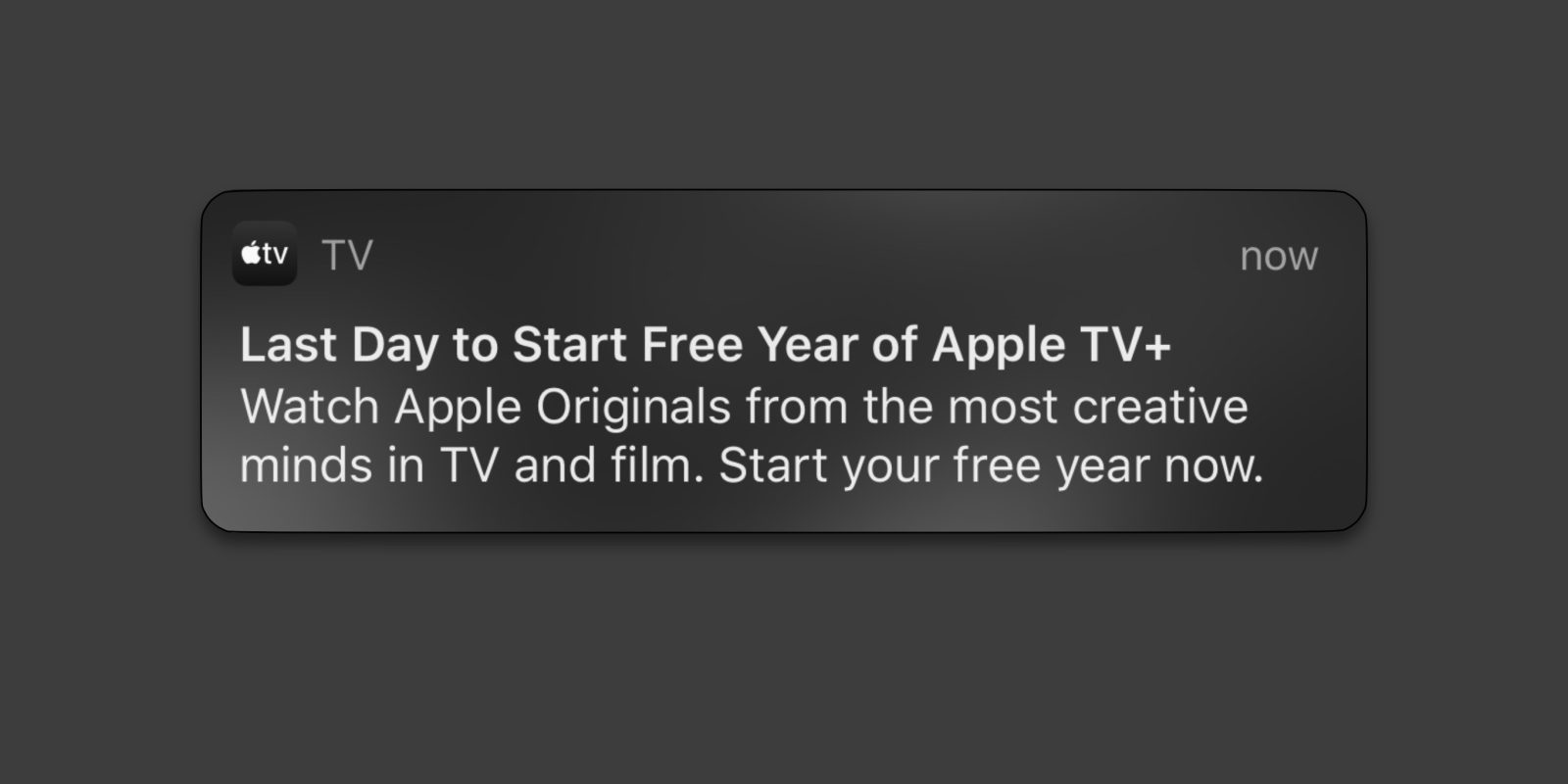 If you bought an iPhone 11 on launch day, or basically any iPhone, iPad, Apple TV, Mac or iPod touch between September 10 and November 1, you are almost out of time to get your free year of the Apple TV+ service.

Apple TV+ is Apple’s new video streaming service, a combination of original TV shows plus movies. The normal subscription costs $4.99/month. Apple is using the free year trials with hardware purchases to help kickstart the launch of its service as it enters into competition with the likes of Netflix, Amazon Prime Video, Hulu and others.

Apple has been promoting the free trial repeatedly since the TV+ service debuted, and now we are finally at the end of the eligible period for any stragglers.

The Apple TV app is reminding people today that they only have about 24 hours left to activate the Apple TV+ free year. The pictured alert was seen in Australia, so expect it to start showing up for users around the world in the forthcoming hours.

The terms of the offer mean that you have 90 days from the date of activating your new device to accept the Apple TV+ terms and get a free year trial (the subscription will automatically renew at $4.99 per month after the year is up, but you can cancel at any time).

However, the Apple TV+ offer was officially announced on September 10 at the iPhone 11 event but the TV+ service did not begin until November 1. To accommodate for that difference, any eligible hardware purchase between September 10 and November 1 is assumed to have been activated as of November 1.

That means millions of customers have the deadline of January 31st to get their free year. It includes anyone who bought a new iPhone 11 or iPhone 11 Pro in September or October for instance.

Apple TV+ lives inside the TV app, which aggregates all sorts of video content. The TV+ subscription specifically gives access to the Apple Originals TV+ content. Apple is building its content library from scratch, so right now TV+ offers 11 shows and 2 films. Apple is adding new content to TV+ regularly and has already announced 12 more titles (spanning dramas, comedies, and documentaries) to launch on the service by June.

So, even if there’s nothing on TV+ that sparks your interest at the moment, you should get the free year in case anything appeals down the road. Remember to set a reminder to cancel a year from now and you won’t be charged a cent.

The Apple TV+ offer can only be redeemed once per Apple ID, and once per Family Sharing group, so you can only get a maximum of one year free even if you bought more than one new device.

In the future, it is possible that Apple starts a new free bundle deal but under the currently announced terms, this is the last chance for a free year of Apple TV+ for millions of new iPhone, iPad, Apple TV, and Mac owners.