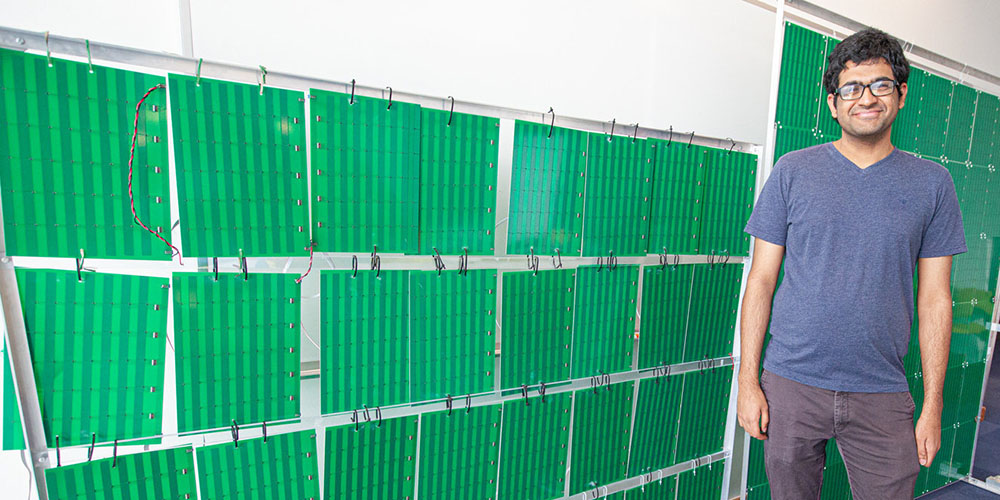 Future Wi-Fi devices could literally get thousands of antennae to improve signal quality, thanks to a Massachusetts Institute of Technology (MIT) invention…

Engadget reports that researchers have worked out how to turn the surface of a device into an antenna array.

There’s a problem with stuffing wireless connections into ever-smaller devices: They can struggle to maintain a good signal when there’s so little space for antennas. MIT CSAIL researchers might have a fix, though. They’ve developed an RFocus “smart surface” that “can work both as a mirror or a lens” to focus radio signals onto the right devices on either side of the “fence.” In return, this improves the median signal strength by nearly 10 times, while doubling the median channel capacity in an office environment.

Instead of just a handful of monolithic antennas, the RFocus prototype revolves around 3,000-plus tiny antennas with software that arranges them to maximize reception. In other words, RFocus is acting as a beamforming controller in the middle, as opposed to letting the radio endpoints — transmitters and client devices — manage this activity, which would be difficult to implement on tiny devices.

It uses similar tech to RFID tags, giving it two key benefits. First, it’s cheap, costing only a few cents per sheet. Second, it can get its power from the RF energy, so no direct power connection is needed.

In practice, the number of antennae used in consumer devices is likely to be far fewer, but even a switch from a typical four antennae to 10 focused ones produces a significant improvement in connectivity.

Researchers say the tech can be used in future Wi-Fi devices with no risk to safety.

Because the RFocus surface doesn’t emit any energy of its own, it does not increase the total radiation. It can focus the energy to an area the size of a wavelength, which is as risky as being near the transmitter. RFocus appreciably increases signal strength only near the intended receiver, and not at other locations. Any device’s ability to focus energy to an area smaller than a wavelength drops exponentially with distance from it.