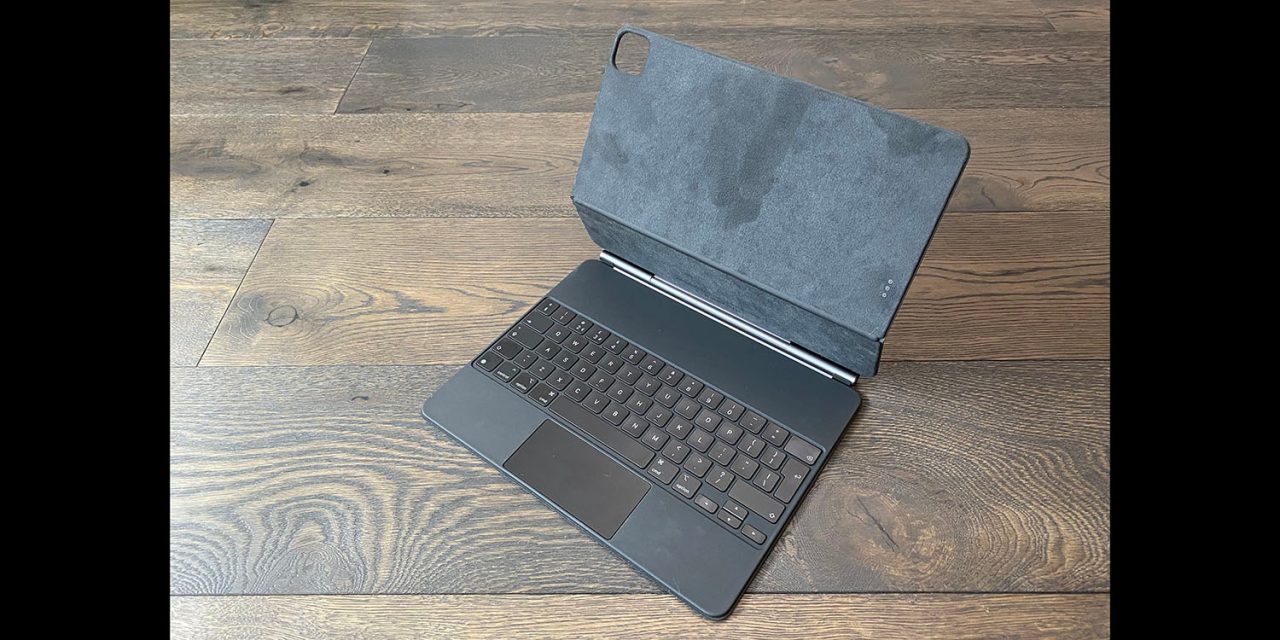 I’ve often said that my Mac is my most important Apple product: if I could only have one, that’s the one I’d choose. Partly because bigger is better in my view when it comes to screen sizes, and partly because of its flexibility. The combination of powerful apps, a proper file-system and windowing.

That was largely because I wanted to get more experience with it, but it also didn’t feel like much of a compromise. I wanted to refer back to a previous post while writing, and Split View did a perfectly good job of that: Safari on the left, WordPress on the right.

The keyboard was just as pleasant to use. The reduced spring strength is different but not inferior. The trackpad is smaller, but still perfectly usable.

Two weaknesses of the keyboard

I wanted to embed a YouTube video in the post, and it was then that two keyboard weaknesses made themselves known.

First – and I find it hard to believe this is true – there’s no Escape key! I’m so used to using that to exit from full-screen video viewing, it seems such a fundamental element on a keyboard, and yet it’s true: it really is missing.

Second, the lack of function keys. I hadn’t been sure how much I would miss them. I don’t often play music on my iPad, so wasn’t bothered about the lack of music controls. I find the on-screen brightness control of the iPad faster to use than keys, so didn’t mind the lack of those. I almost never adjust keyboard backlighting, so no problem there. But there was one immediate and obvious weakness when watching video: no volume controls.

Sure, there are hardware buttons right there on the top of the iPad, so it shouldn’t be that big a deal, but as a big keyboard shortcut guy, it did feel clunky to have to lift my hands from the keyboard to adjust the volume.

It’s hard to understand Apple’s thinking here in not including function keys.

The ease of attachment and removal is a huge plus

I mentioned yesterday one drawback of the Brydge keyboard, much as I love it: the fiddliness of inserting and removing the iPad. For that reason, I generally keep the iPad naked at home, and keep the keyboard permanently attached when mobile.

But the ease of attaching and removing the Magic Keyboard means that, so far at least, I’m keeping it in the case by default, and then just removing it when I want to use it as a tablet.

That has two benefits. First, when I find myself wanting to do a little typing, like an iMessage. There’s no way that would have justified going to fetch a keyboard, but since it’s right there, it speeds things up.

Second, the Magic Keyboard makes a handy stand for things like viewing video, and – indeed – for general use on your lap. It just holds it as a convenient position and angle, and it’s again nice to always have this available.

One tiny weakness on screen angles

The range of screen angles is fine for everything except one, somewhat individual, situation. I have a Varier Gravity Balans chair: the most expensive and most comfortable chair I ever bought. 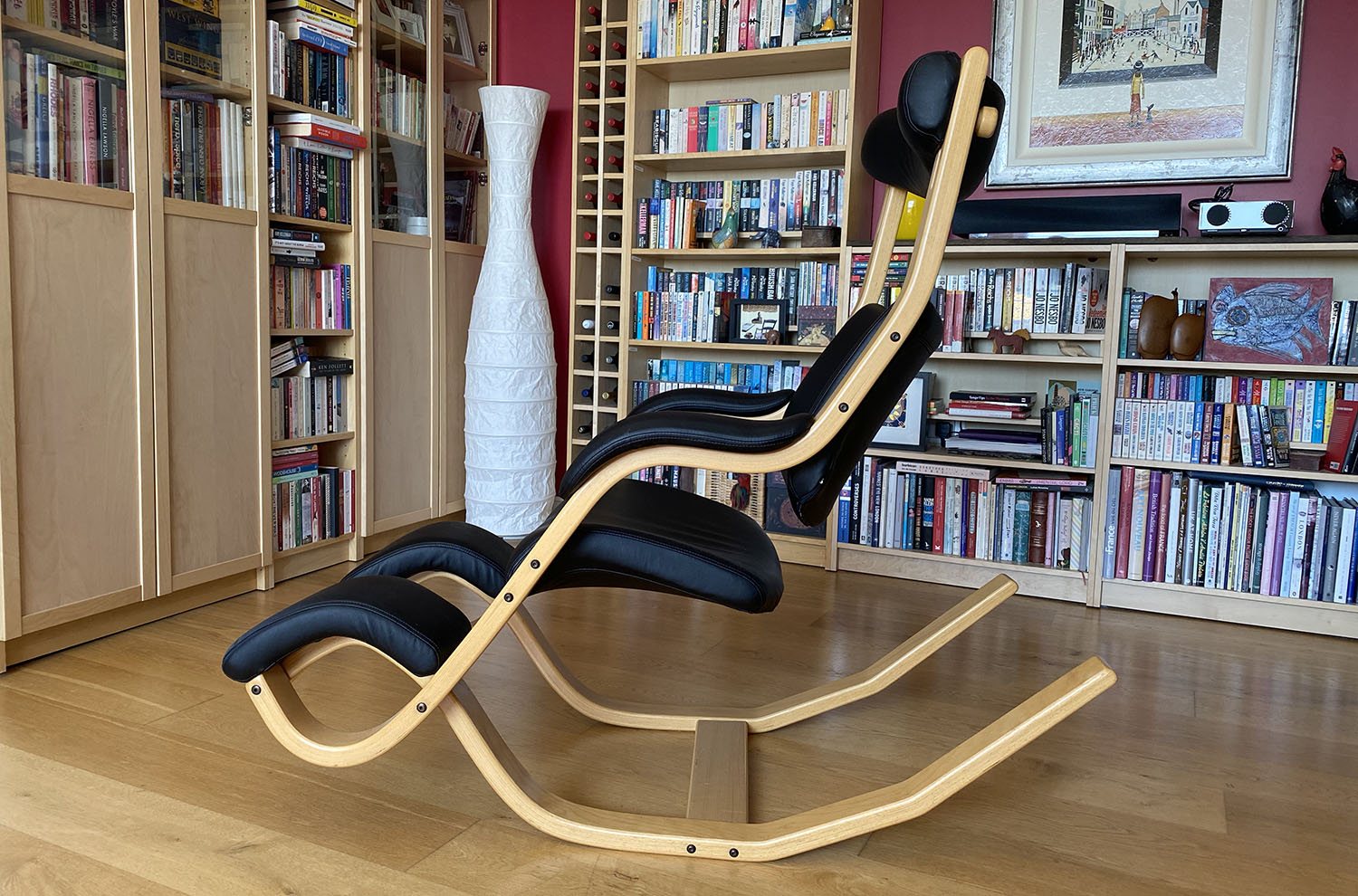 This has four positions, the most reclined of which is the so-called zero-gravity horizontal position. 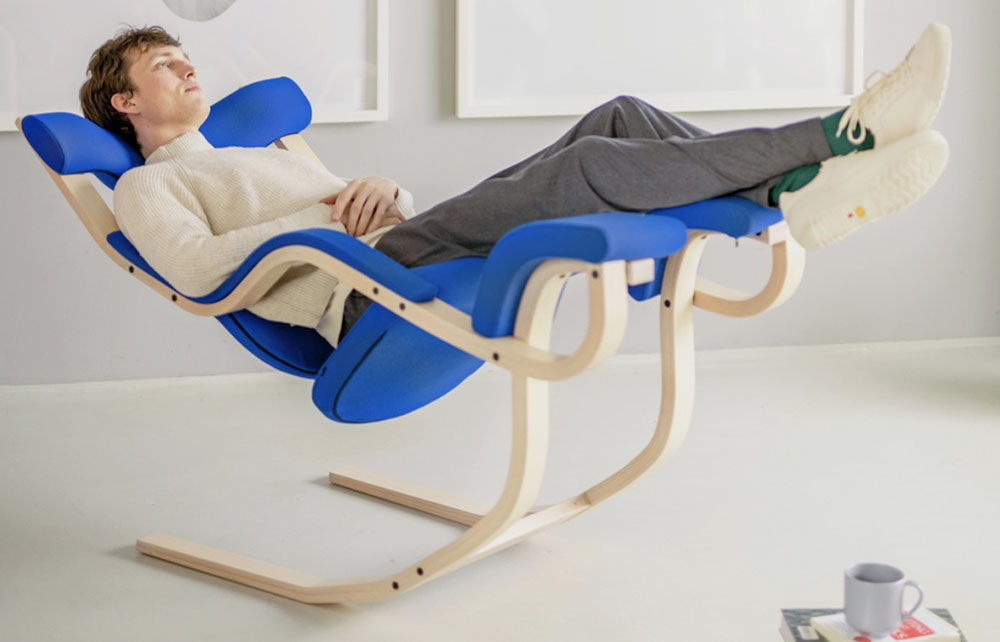 I do sometimes use my MacBook for video viewing in this position, which works perfectly, but the Magic Keyboard doesn’t tilt back quite as much as I’d like it to. I’d only want about another five degrees, so it’s no big deal, but it is the one time I’ve found when it’s not quite enough.

A potential solution for those who draw

Someone asked about this. I can’t draw anything beyond breath, but someone else came up with one possible solution …

Also, a suggestion which seems whimsical but is 100% serious. If you’re drawing, keep the Magic Keyboard attached, and flip the whole thing over like this. Looks silly, but I have NEVER used a more stable angled writing/drawing surface. Try it out. It’s unsurpassed. 🤷‍♂️ pic.twitter.com/TOLXbHKFjX

The setup is very similar to the Surface Pro

Incidentally, it’s interesting to see just how close the 12.9-inch iPad Pro plus Magic Keyboard is to Microsoft’s Surface Pro. My girlfriend has one as her work laptop, and it really is remarkably similar in form-factor. Just a different aspect ratio, different keyboard style, and that bizarre offset Surface trackpad. 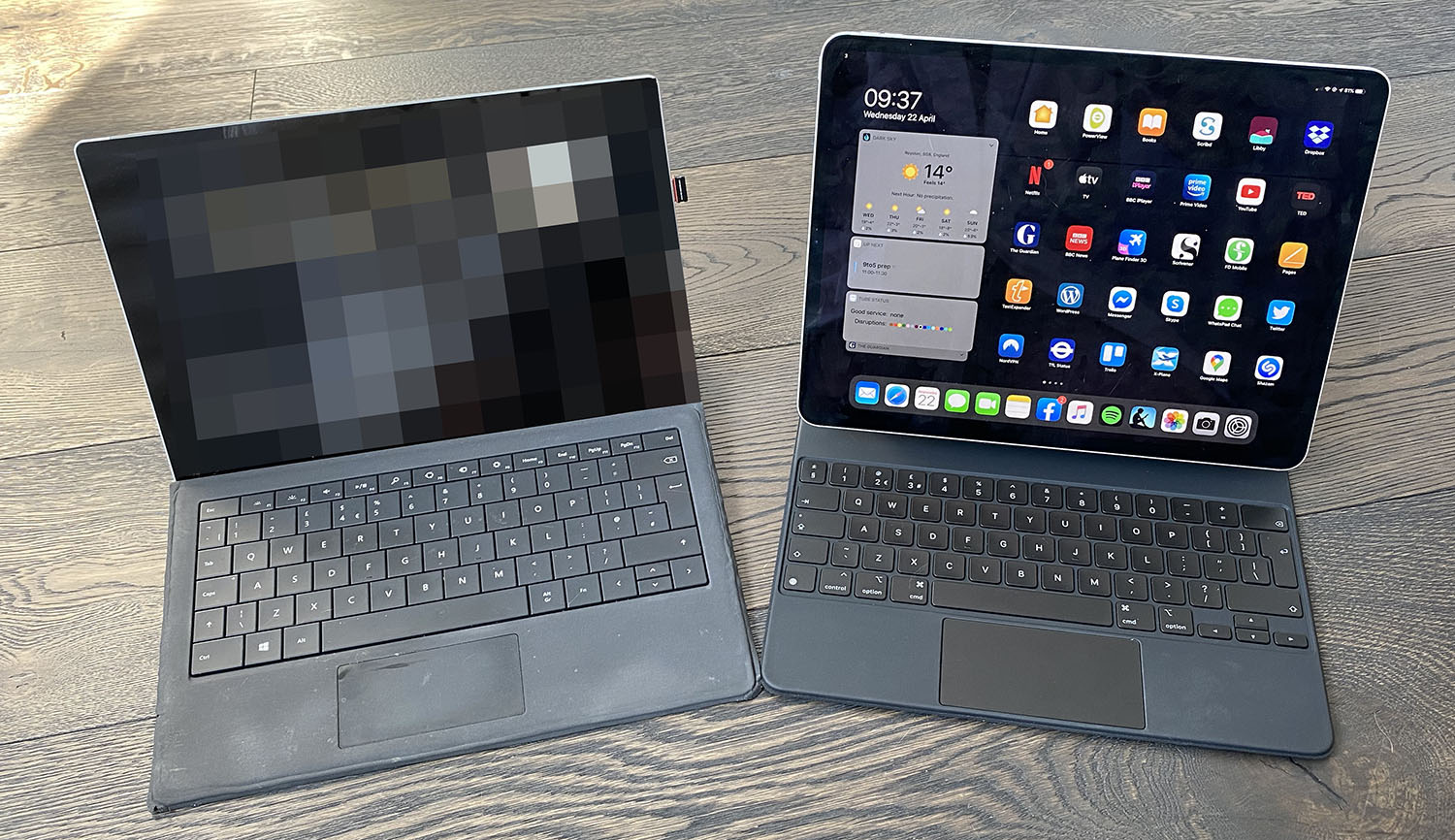 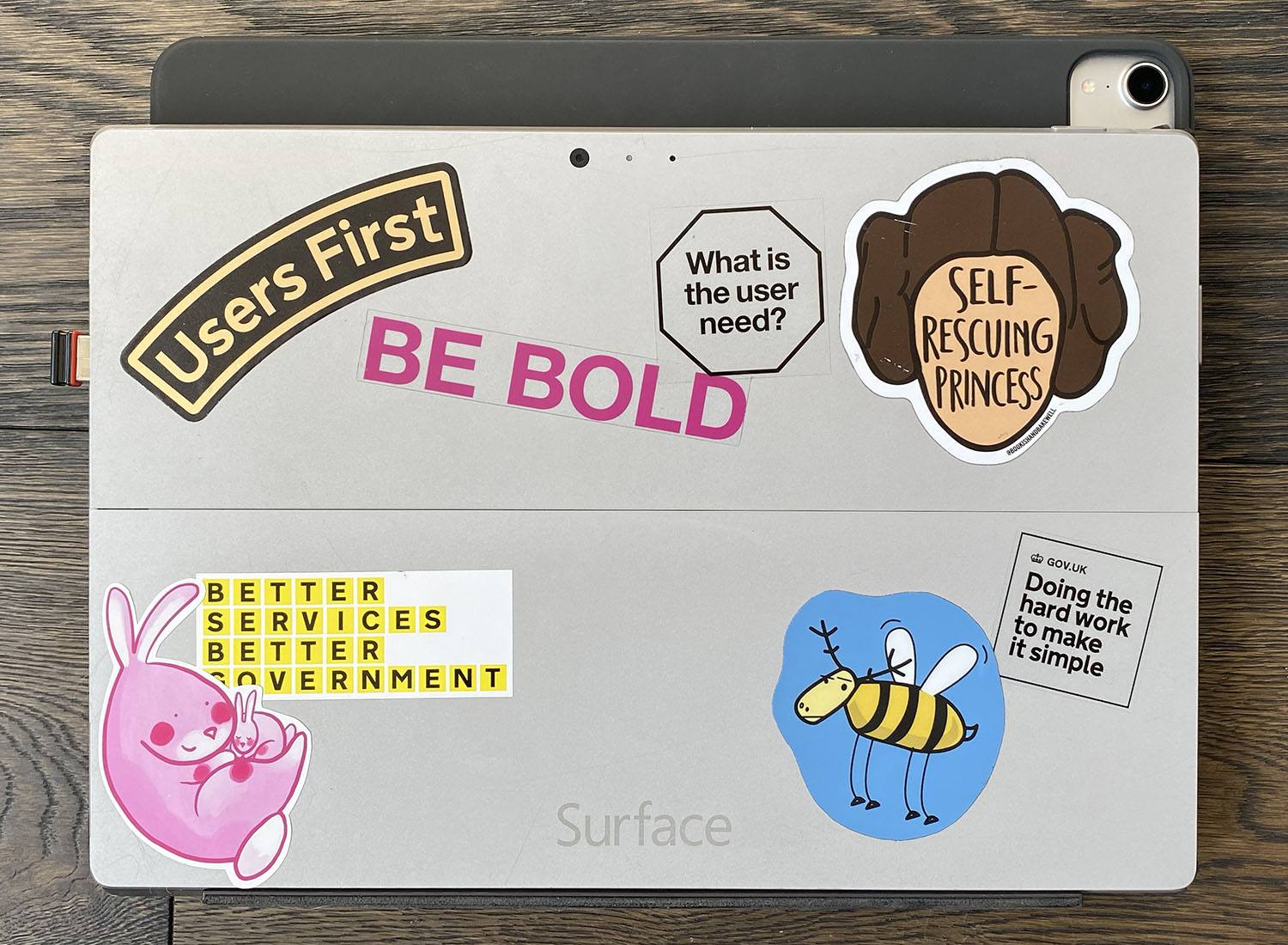 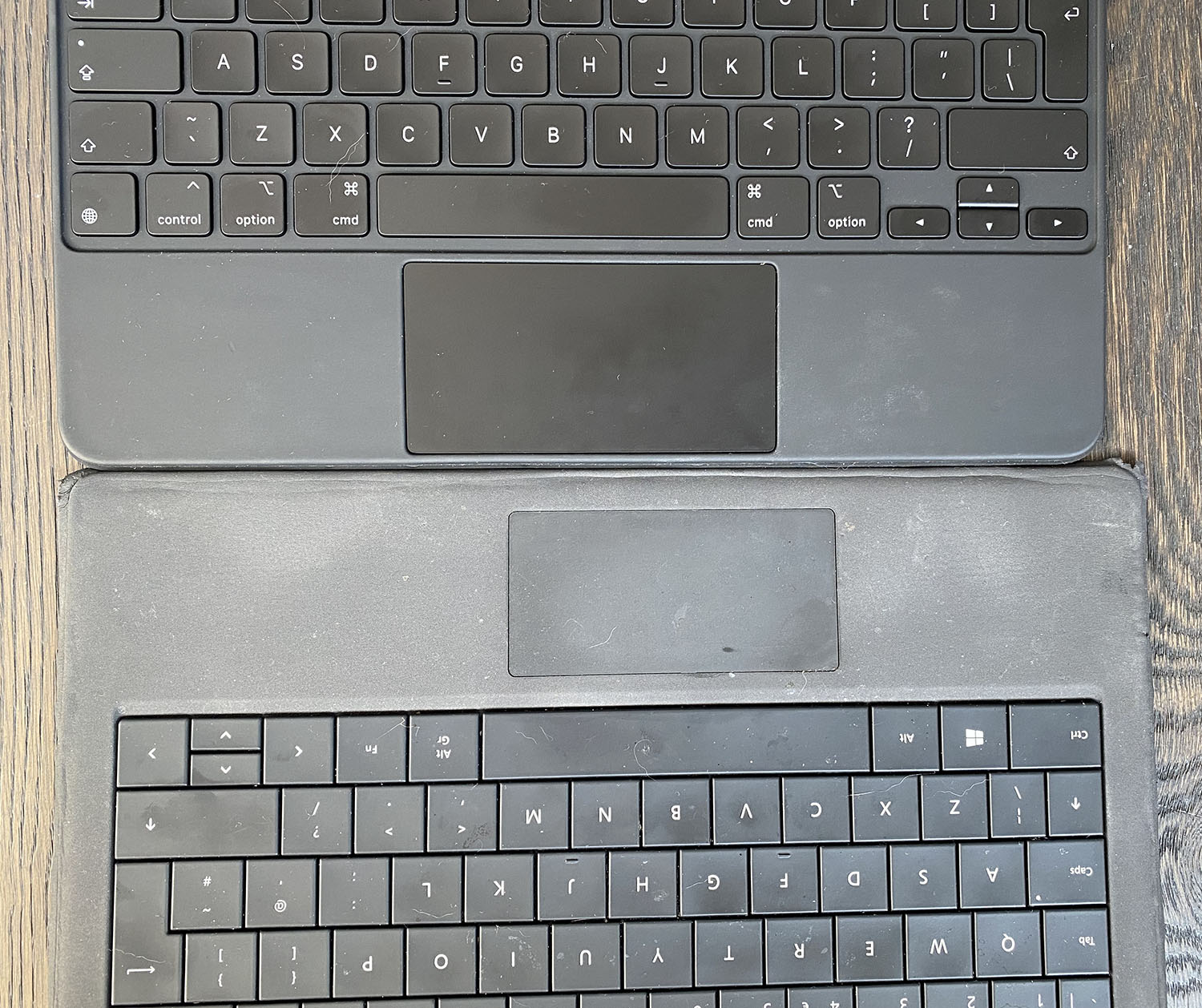 The lack of Escape key does bug me. It just seems such a weird decision. The lack of other function keys seems equally odd, though doesn’t bother me as much. But I’m still very much expecting to keep it.