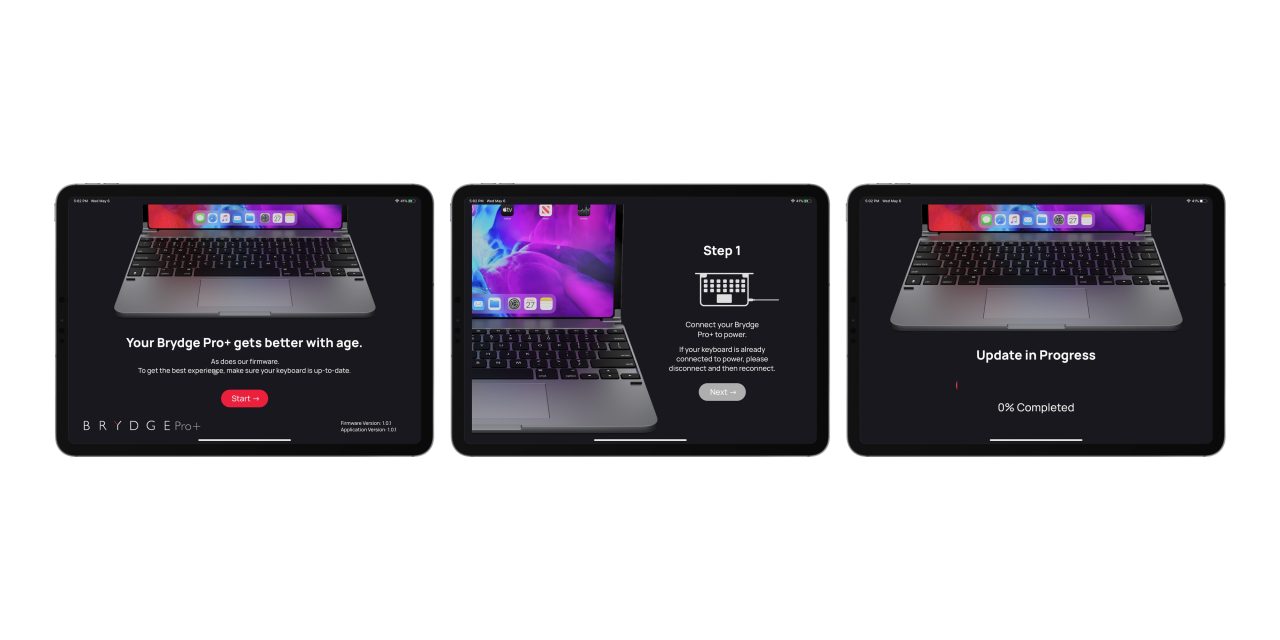 Popular iPad accessory maker Brydge has released a new Brydge Connect app for iPadOS today. This app will allow users to update the firmware of their Brydge Pro+ keyboard and trackpad case, the company says.

The new Brydge Connect app is available via the App Store now for iPad Pro users. Once you install and open the app, with a Brydge Pro+ connected, you’ll be prompted to update the accessory’s firmware if a new version is available.

Brydge says the first update to the Brydge Pro+ firmware includes improvements to pointer tracking and the two finger scroll experience. The update also adds support for two-finger right-clicks, but there is still no support for three-finger gestures.

Early reviews of the Brydge Pro+ have been mixed. For instance, Jason Snell at SixColors cited numerous reliability and performance issues with the trackpad:

The trackpad on the Pro+ isn’t remotely close to Apple’s trackpads in class. Sometimes I move my finger across the trackpad and the cursor appears, but doesn’t move. Other times it moves, hesitates, and then moves some more. Two-finger scrolling is similarly unpleasant. The result is an imprecise, jerky experience. It’s no good. And there’s no support for navigating between apps via three-finger gestures, either.

Brydge’s goal is to solve these problems using the new Brydge Connect app. The app is designed to make firmware updates available for the Brydge Pro+, with Brydge saying the keyboard and trackpad combo “gets better with age.”

The jury is still out on whether the first update for the Brydge Pro+ firmware makes the drastic improvements that are needed. I’m continuing to test the Brydge Pro+ alongside Apple’s Magic Keyboard for iPad Pro, and I’ll have more details soon.

The Brydge Pro+ is available for $199/$229, but orders are back-ordered until later this month. It also might be wise to wait until early users have spent more time with the new firmware updates. You can download the Brydge Connect app on the App Store for free.