Review: Abode Iota HomeKit security system is the most compelling option on the market with great flexibility and functionality 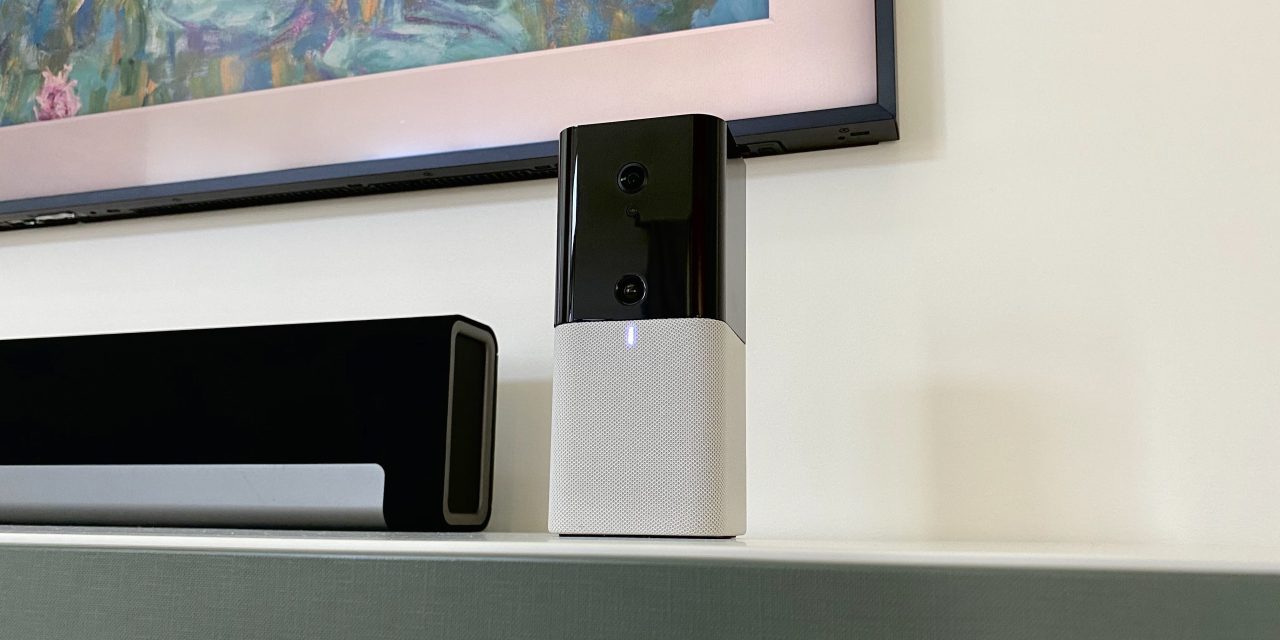 Abode became the first DIY security system to launch HomeKit support last year which was an exciting development for those tightly integrated with Apple’s ecosystem. And in just the last month, the company has rolled out an all-new iOS app and updated plans that offer everything from free self-monitoring to 24/7 professional monitoring with cellular and battery backup. Follow along for a detailed look at why Abode’s versatile Iota security system is a great choice for home/business and the HomeKit experience it offers.

After using the Abode Iota HomeKit security system I think the biggest positive aspect that stands out to me is how flexible and capable it is. If you want to use traditional hardware accessories like a physical keypad or the included keyfob, Abode supports that. For a more modern approach, you can opt to use automations and the iOS app and Home app to arm and disarm the system (or of course all of the above).

You’ve got HomeKit support which is the big selling point for me but there’s also Alexa, Google Assistant, IFTTT, Sonos, Ecobee, ZWave functionality, and more built-in too. And there’s also the option to use on-demand professional monitoring if you’d like to have flexibility when to use it.

While you can find motion sensors or door and window sensors that work with HomeKit from a few other companies, Abode offers the richest experience with the Iota Hub that includes a 1080p camera, motion sensor, siren, and more. And there’s no doubt that Abode also has the largest assortment of accessories (including slick sensors that are totally hidden).

And since it’s a wireless DIY security system that you can easily customize, it’s easy to install no matter how old or new your home or business is (nice bonus is you can manage multiple Abode systems in the latest version fo the iOS app without multiple logins).

Abode now offers HomeKit support for both the Iota Smart Security Hub and its standard Smart Security Hub. But I would say unless you specifically don’t want a camera in your hub to spend the little bit extra for the Iota Hub. It’s got the motion sensor integrated along with Wi-Fi and Ethernet support while the standard Hub uses an external motion sensor, lacks the 1080p camera, and needs to be hardwired.

For my review, I’ve been testing the Iota Smart Security Hub. The setup process is simple and straightforward with the Abode iOS app (the app got some rough reviews after the May update saw some location services bugs but those have been patched).

I really like the clean and simple aesthetic of the Iota Hub and think it works well with a variety of tastes. The front of the device features the 1080p camera and motion sensor in the top half, while the bottom half has the built-in two-way speaker/microphone and 92dB siren.

Around back you’ve got the power port, Ethernet, as well as microSD card and SIM card slots (SIM comes pre-installed). The Iota Hub also has a built-in battery that will keep it connected during a power outage. Just keep in mind you’ll either need to opt for the Pro plan (detailed below) to use the backup cellular monitoring or have your modem/router hooked up to a battery backup to keep everything running in a power outage if you choose the free or Standard plan. 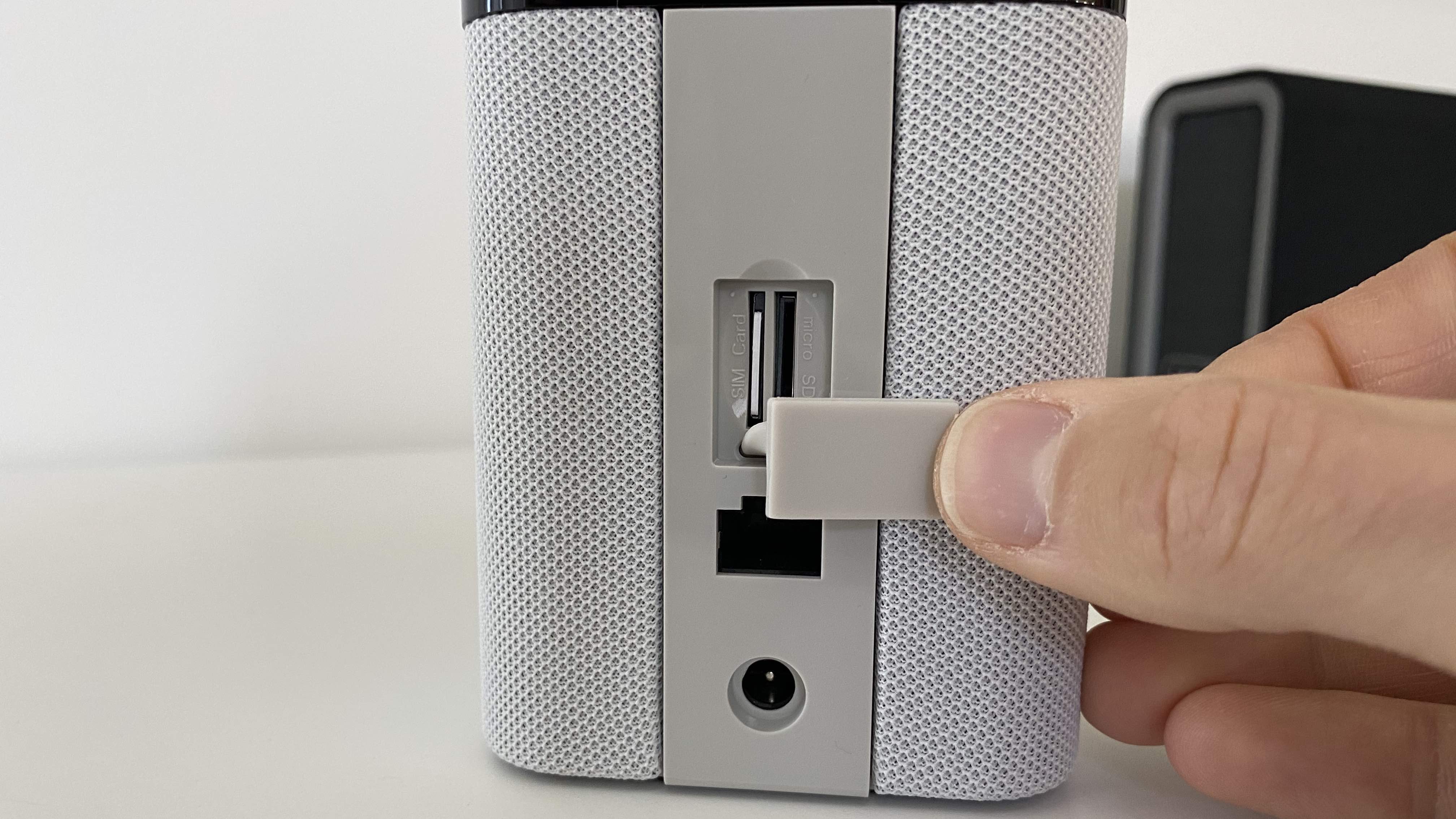 For both paid options, you can choose to pay monthly or save some money and pay by the year. As the name suggests, the Pro plan is what offers 24/7 professional monitoring but if you don’t want to commit to that on a monthly or yearly basis, you can add pro monitoring on-demand from just $8 for three days if you go for the Standard plan. 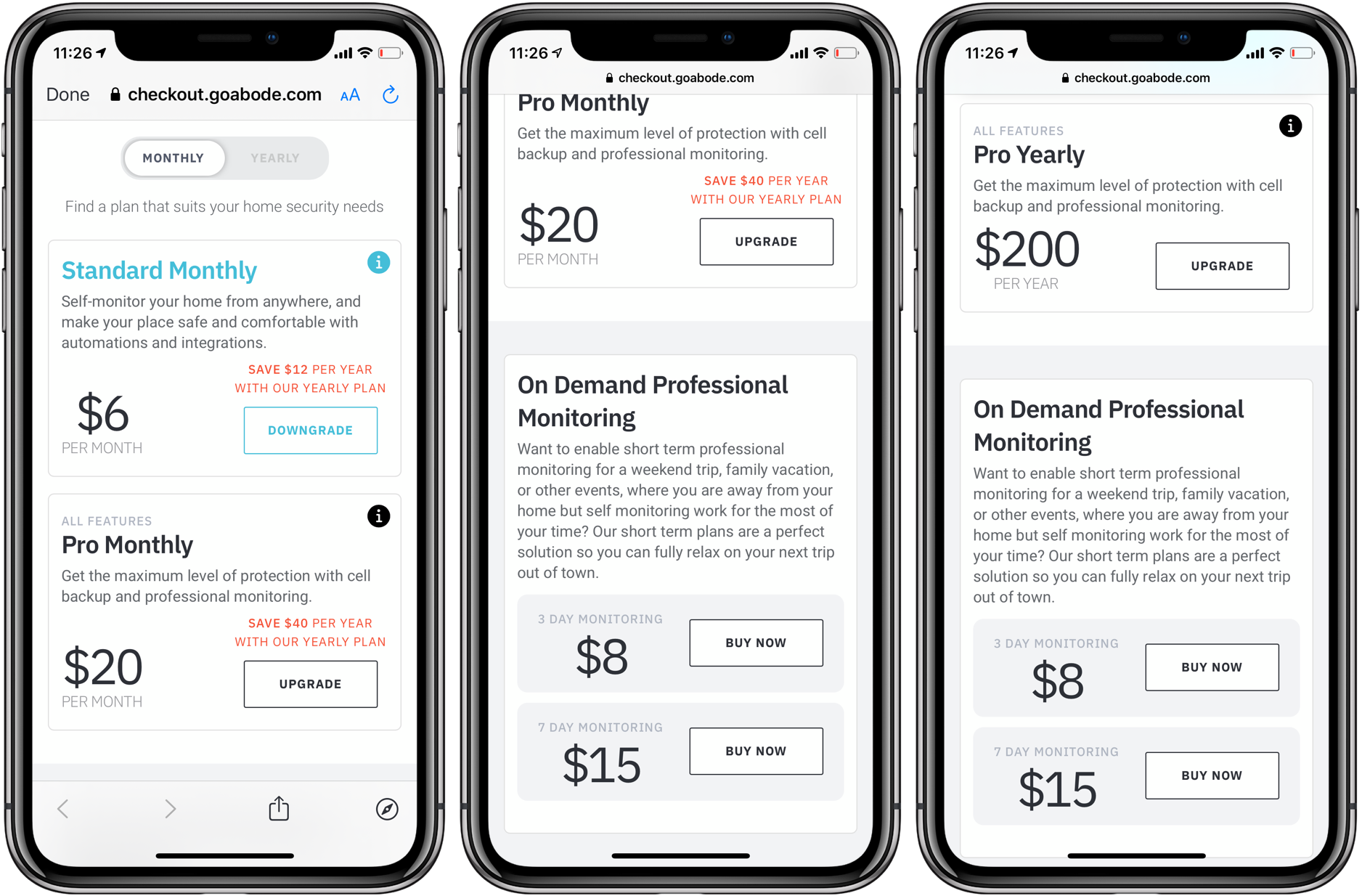 So the break down is the Standard plan is normally $72/year if you pay monthly or $60 if paid upfront for the year. The Pro plan runs $240/year if billed monthly or $200 in a lump sum.

You can see the full plan comparison chart here.

Once you’ve got the Iota Hub initial setup done, you can grab the HomeKit setup code in settings of the Abode app.

Once it’s added to the Home app, you can rename and customize the three HomeKit tiles: camera, motion sensor, and alarm.

Next, we’ll look at adding door/window and other sensors then come back to how Abode works in the Home app in a bit.

HomeKit-enabled sensors and other accessories

Other Abode accessories include a motion sensor, multi-sensor (coming later in June), keypad, outdoor siren, smoke alarm monitor, vibration and acoustic glass break sensors, and more. Not all of these are HomeKit-compatible, but the devices that will show up in the Home app are clearly marked on Abode’s website.

Here’s a look at the Mini door/window sensor, it shares roughly the same footprint as the AirPods Pro charging case but is slimmer. 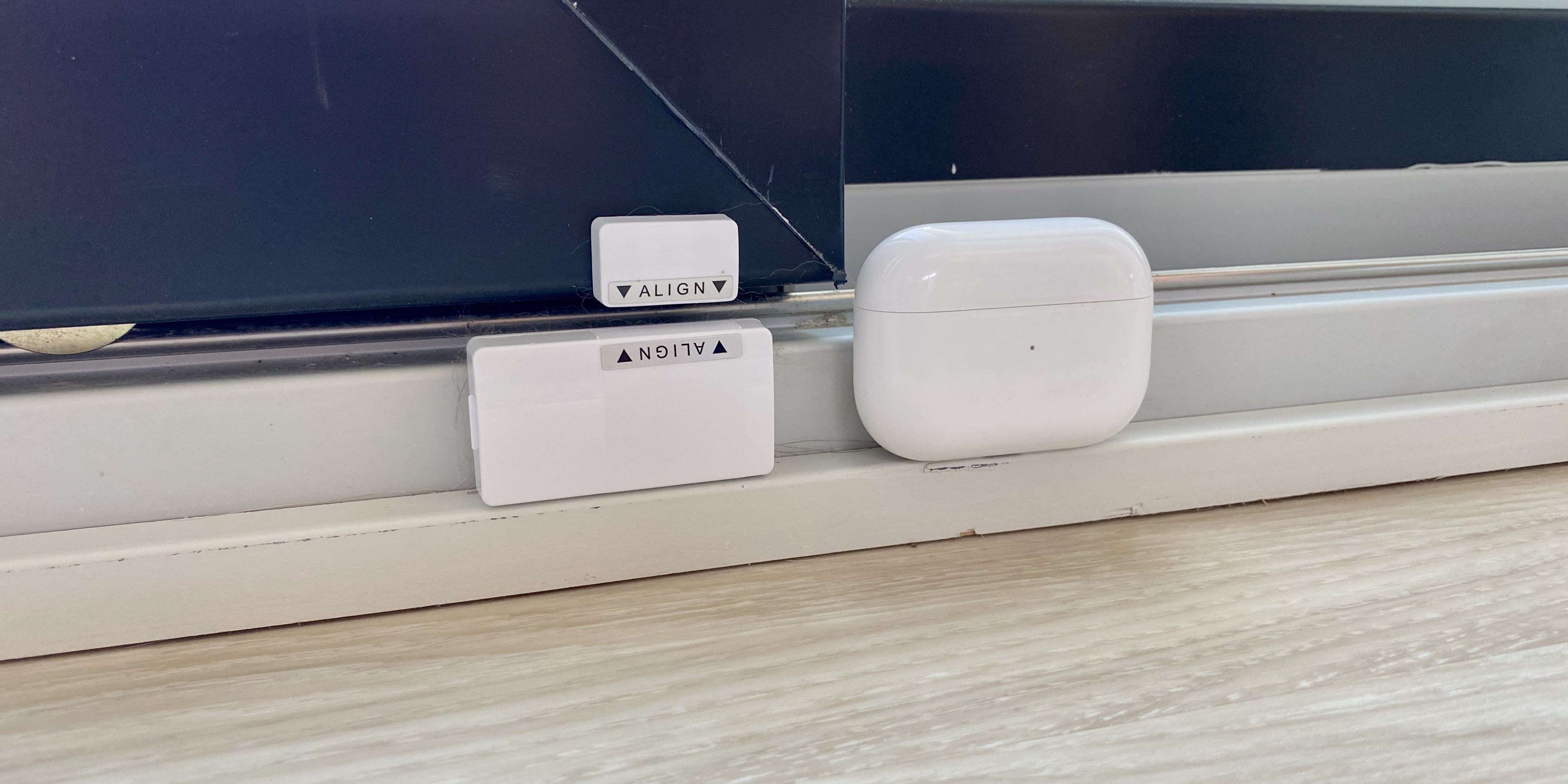 It’s so compact that after installing it we haven’t noticed it at all (and that’s even on our sliding door that’s black).

But if you can (and/or want to) drill into your door or window, the Recessed sensor is a really nice option.

You need a 3/4-inch drill bit and you’ll definitely want to drill as straight a hole as possible 😄.

And here’s what it looks like to add sensors in the Abode app which are automatically added to the Home app.

Ok, now back to the Home app. As I mentioned above, when you add sensors and other compatible devices in the Abode app, they’ll automatically appear in the Home app.

You’ll also see an armed/disarmed status at the top of the Home app:

For door and window sensors you’ll just get an open/closed status. You can customize your notifications from these sensors in the settings for each sensor. You can also use them with Home app automations.

For the Iota Hub, there are three HomeKit devices available. You may want to show them as separate tiles for easy Home app access.

Security system integration with HomeKit is definitely in its infancy (specifically alarm support), so while it’s awesome to have support at all, don’t expect a totally smooth experience here. I imagine this is going to be a cooperative effort from Apple and Abode (and future HomeKit security system makers) to iron things out.

Update 7/21: I’m excited to say that arming and disarming is now working consistently for me through the Home app as well as through Home app automations.

For example, for now, Siri can’t arm and disarm security systems. In my experience, arming the system manually through the Home app is hit and miss but disarming works consistently. You can also ask Siri for the status of your security system. Read more about Abode + HomeKit in this support doc.

You can set up automations through the Home app for Abode but if you’re a Standard or Pro plan subscriber I found it’s better to create the automations in the Abode app in the Cue tab. Here’s what that looks like:

All in all, after spending time with the Abode Iota HomeKit security system I think it offers the best experience available even though there are improvements I hope to see arrive in future updates. It’s vastly improved when it comes to functionality and flexibility over traditional options like ADT and also leapfrogs newer options like SimpliSafe by working with HomeKit and a longer list of smart home platforms and services.

When you look at everything you’re getting with Abode and the ability to customize and install the security system easily for any type of home or business, I think there’s a lot of value.

Based on Abode’s track record, I also feel confident it will continue to improve the service and functionality over time. A couple of specific improvements beyond greater HomeKit support mentioned above I’d like to see would be HomeKit Secure Video support for the 1080p camera as well as person detection a la Netatmo’s Indoor Camera.

The Abode Iota Smart Security Kit normally retails for $299 and is on sale at the time of writing for $229 direct from Abode.