There’s been a lot of discussion about the macOS 11 Big Sur icons, much of it heated. Once again, Apple has managed to polarize opinion between those who are heaving a sigh of relief that Apple isn’t bringing completely flat design to the Mac, and those who are just heaving at what they consider ugly and inconsistent graphics.

One designer argued that Apple is on-trend with ‘neumorphism,’ but Apply Pixels icon designer Michael Flarup says this isn’t a new trend, but rather Apple bringing back fun and ‘judicious expressiveness’ to its visual design …

Flarup acknowledges the controversy, saying that this is inevitable.

As with all big shifts in design, you’re going to get a lot of noise. People will try to co-opt this new direction and attempt to label it as something it’s not (looking at you neomorphism). People will find fault with the execution. People will disagree that there’s even a change. There’ll be snark. There’ll be a period of adjustment. There’s a lot to talk about— but I think most of it misses the point.

He agrees with one argument made by Koloskus – that the flat design introduced in iOS 7 was a reaction to skeuomorphism – but doesn’t see this as the pendulum swinging the other way. He says rather than flat design was too constrained, and this is about breaking free of some of those bonds.

I think the problem with minimalism as the overarching goal of visual design is the restraint it puts on emotion. When your goal is to take away as much as possible for it to be as effective as possible— it leaves very little room for expression. This intersection between art and design is a hotbed for discussion and something we’ll probably be discussing long after I’m done pushing pixels.

And he says Apple has already been moving away from totally flat iOS design for some time.

He illustrates this by contrasting iOS 12 with iOS 13. 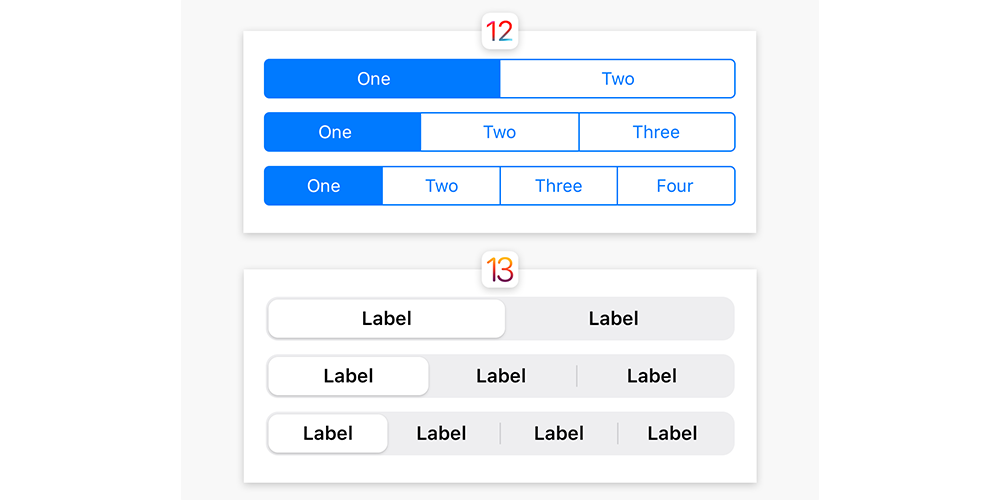 Some feared that the next generation of macOS might go too far toward the minimalism of iOS.

Many suspected that some visual unification would take place and that the minimalism Apple themselves had championed would swallow up any last vestiges of realism or expressiveness in visual design on the mac.

Instead, he points to Apple’s revamped Human Interface Guidelines, and draws attention to one particular phrase in there.

In macOS 11, the design language for app icons promotes consistency with all platforms while retaining the lifelike rendering style typical of macOS icons. App icons combine a rounded-rectangle shape, a front-facing perspective, and a consistent drop shadow to provide a unified visual experience.

Apple is, he says, ‘legalising’ expression.

With this approach Apple is legalising a visual design expressiveness that we haven’t seen from them in almost a decade. It’s like a ban has been lifted on fun. This will severely loosen the grip of minimalistic visual design and raise the bar for pixel pushers everywhere. Your glyph on a colored background is about to get some serious visual competition. If you don’t believe me, it’s now one week after WWDC and dribbble is overflowing with app icon redesigns and I’ve seen at least 3 major icon sets in the works (remember replacement icon sets?). Yes, I’m working on one too.

The debate will no doubt continue. You can of course share your own thoughts about the macOS 11 Big Sur icons in the comments. And if you haven’t already done so, check out our video guide to 85+ macOS Big Sur changes and features.