Before the Apple Store Online: exploring the lost world of AppleDesigns 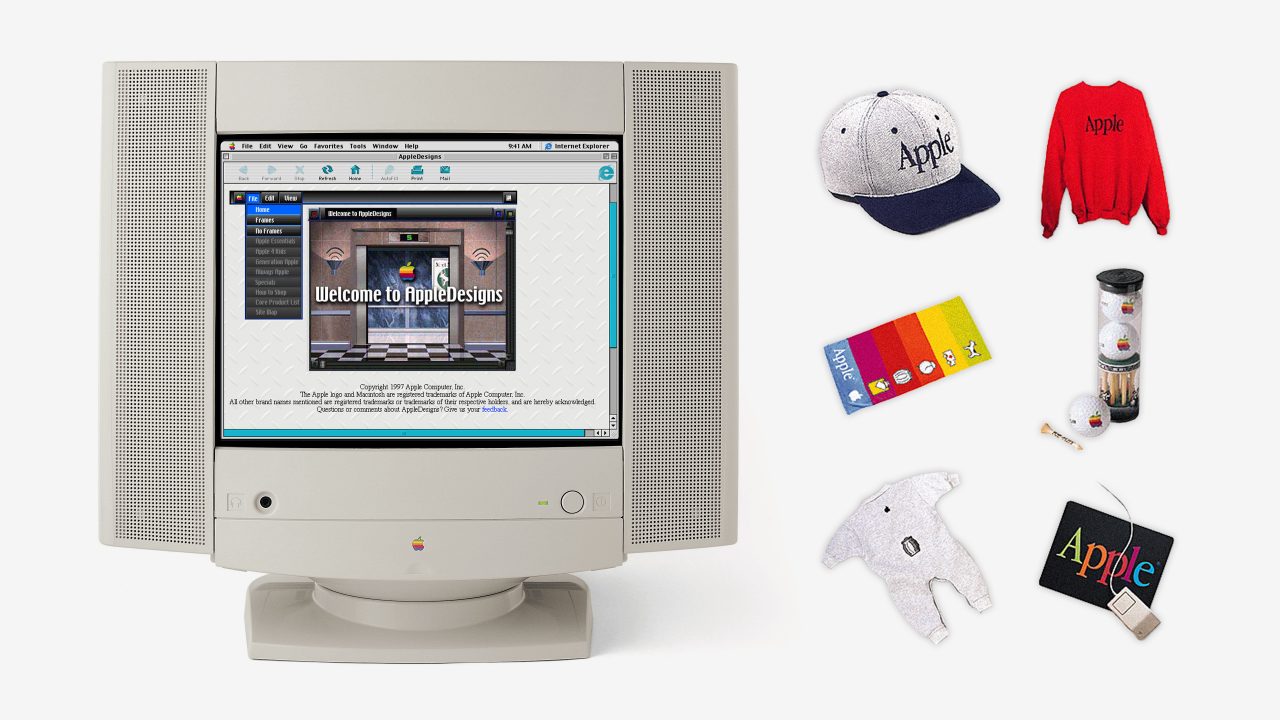 One of the first products you could purchase online from Apple was a set of golf balls and tees. Not a golfer? Apple also offered a puzzle in a can, a paddle game, luggage tags, and even a onesie with the classic Mac OS Trash icon screen printed on the front. These forgotten items and nearly 100 more products came from the peculiar world of AppleDesigns.com, one of Apple’s earliest online shopping projects.

Buying a Mac in the 90s still involved finding a local reseller and venturing out to the store. It wasn’t until November 1997 that Apple launched the online Apple Store and changed the way we shop. But even before the return of Steve Jobs, Apple was experimenting with retail online.

Apple called AppleDesigns “the Apple online department store.” The early website was featured on a full-page ad in MacWorld magazine and briefly listed on Apple’s website as a place to buy “Apple Softwear” and gifts for friends and family.

If you’ve spent enough time on Twitter or Reddit, you’re probably familiar with The Apple Collection, a catalog of vintage Apple apparel that the internet rediscovers every few years. According to long-time Mac user Hyram Hackenberger, AppleDesigns was the collection’s successor and final iteration. 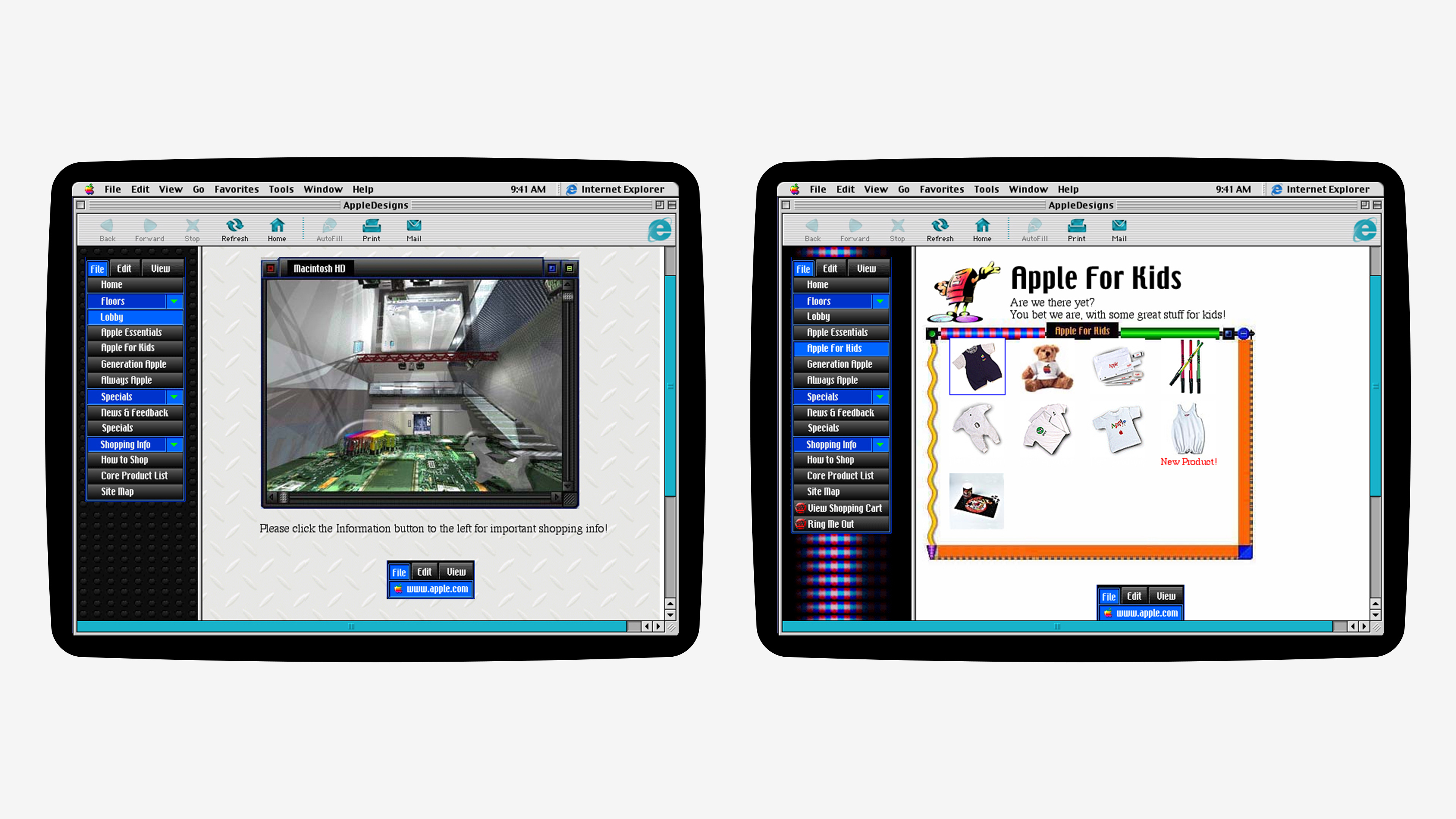 Browsing AppleDesigns is a rush of pure 90s nostalgia. The site was a textbook example of early web design and was filled with bizarre but charming remnants of Apple history. Classic Mac expert John Siracusa tells me the look was inspired by themes from Appearance Manager, the Mac OS 8 and 9 personalization tool. Much of the site’s interface approximates Hi-Tech, a theme designed for the ill-fated Copland operating system.

The AppleDesigns home page was a rendering of an elevator ready to take you to any virtual department in the store. The postmodern lobby was decorated with sconces made from Mac OS sound icons and a poster of Clarus the Dogcow on the wall. Tucked away on another page, the “Atrium” placed you on the logic board of a classic Mac. The image was mapped to bizarre bits of Apple trivia like a “Macology” quiz and a QuickTime postage stamp version of the 1984 Macintosh TV commercial. 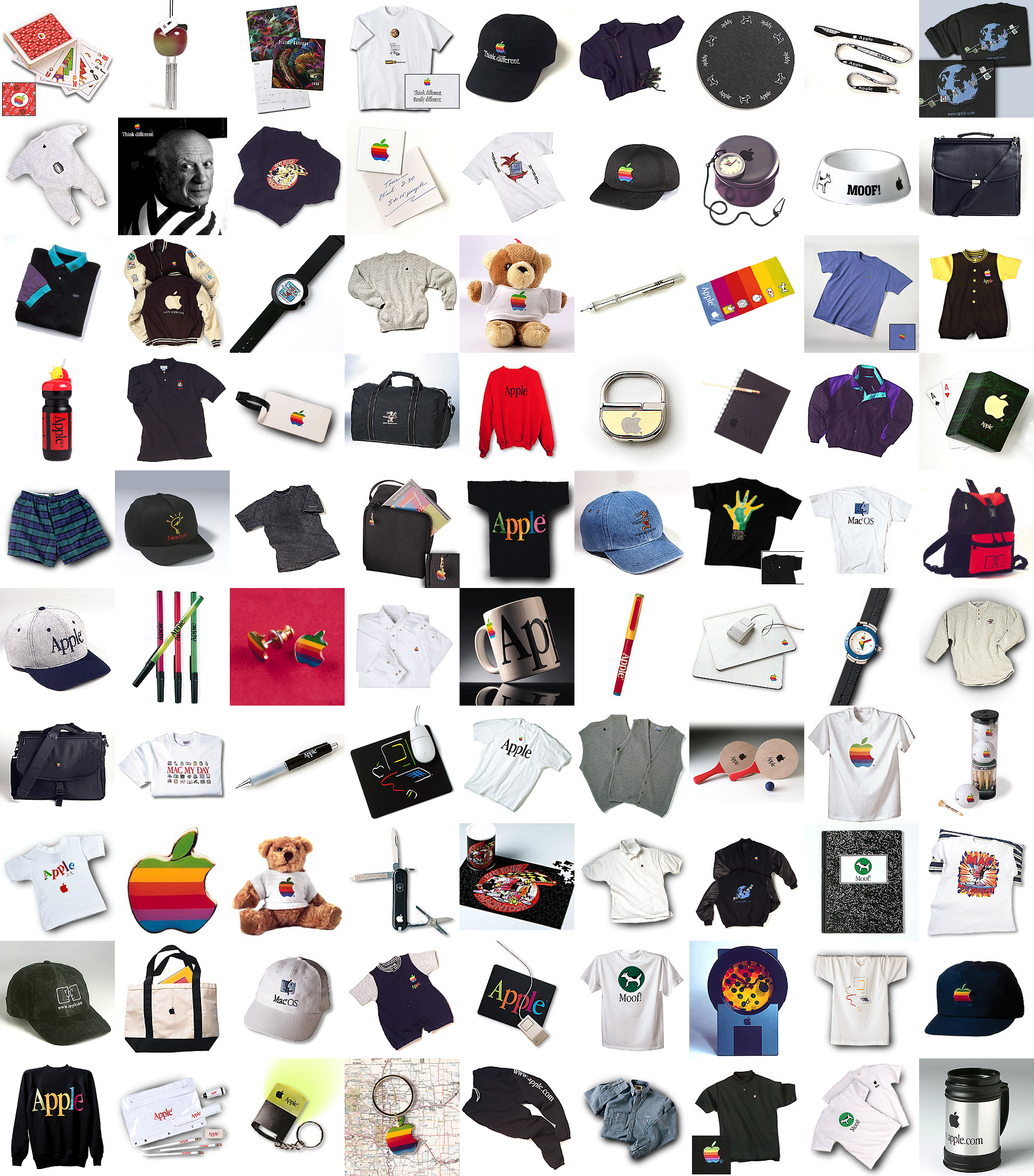 Fans browsing the four main departments of AppleDesigns.com in 1997 could choose from a massive range of Apple-branded merch. “Where were you when the sledgehammer flew?” asked a page with six-color gear. Some products like a classic black Apple t-shirt typeset in Garamond live on to this day at Apple Park Visitor Center. There was a range of sweaters, caps, shirts, and jackets that wouldn’t feel out of place as premium streetwear today. Original “Think Different” posters, now sought-after collectibles, were just $10 for a tube of five.

AppleDesigns was once home to the Mac OS Watch, the Memphis-style piece that saw a resurgence in popularity after the original Apple Watch was announced in 2014. The site also sold a lesser-known “WebSurfer Sam” watch complete with a wavy second hand, as well as a pocket watch packaged in a tin box.

Other AppleDesigns specials are perhaps best left to fade into history. For $11.50, the “Mac My Night” night shirt personified a classic Mac with Mickey Mouse-style hands and feet. The $65 Color Lava Clock had “psychedelic displays of cascading colors.” I have no comment on the Joker tee. 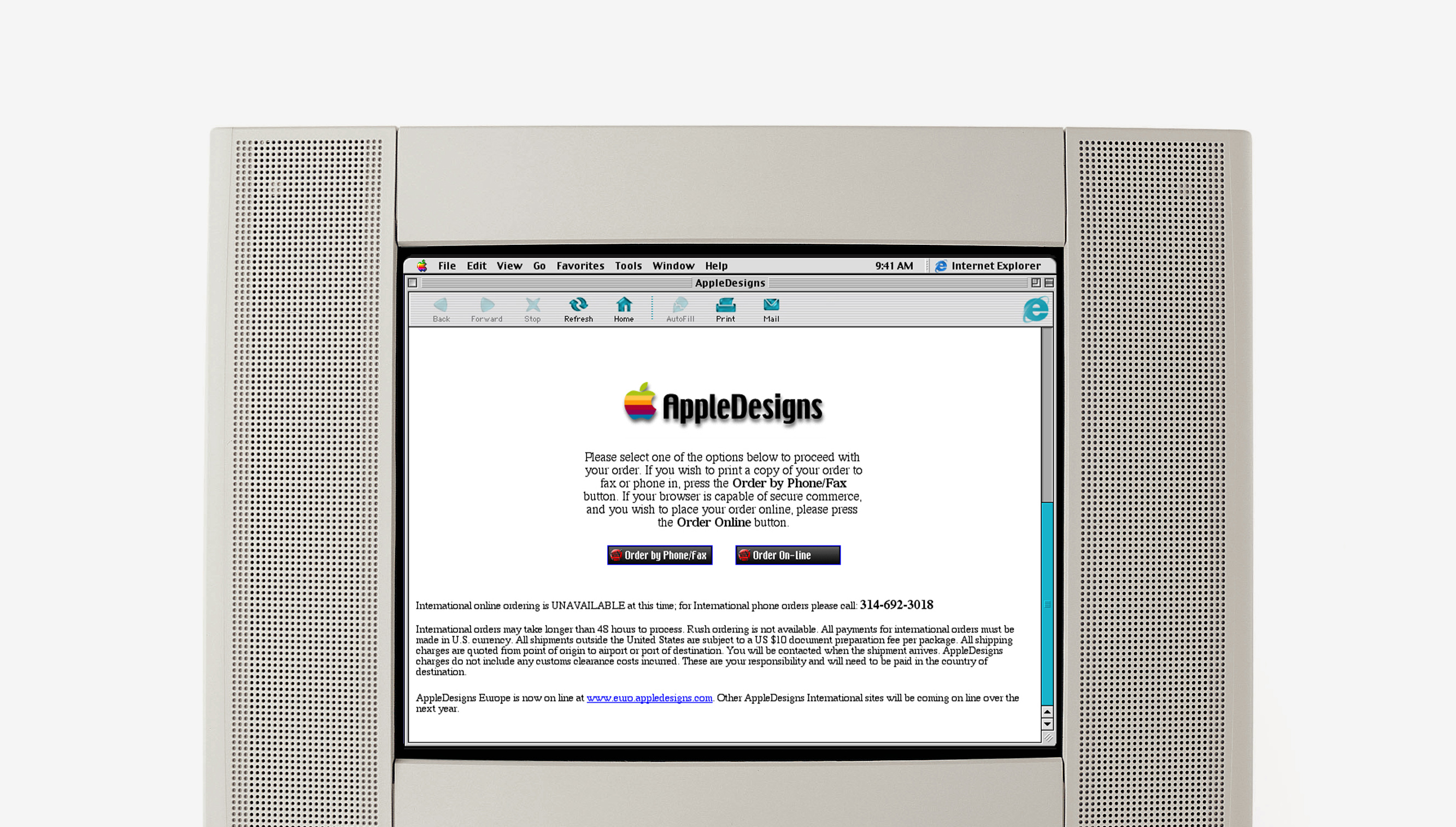 After filling your shopping cart, AppleDesigns had a “Ring Out” button to place an order. Customers could order directly online or print out a copy of their order to fax or phone in. Not all web browsers in 1997 supported online shopping forms and secure commerce.

The AppleDesigns archives end in 1998, shortly after the launch of the online Apple Store and the return of a more focused Apple under the direction of Steve Jobs. A more elegant lineup of Apple-branded gear remained exclusive to The Company Store at Infinite Loop for many years. 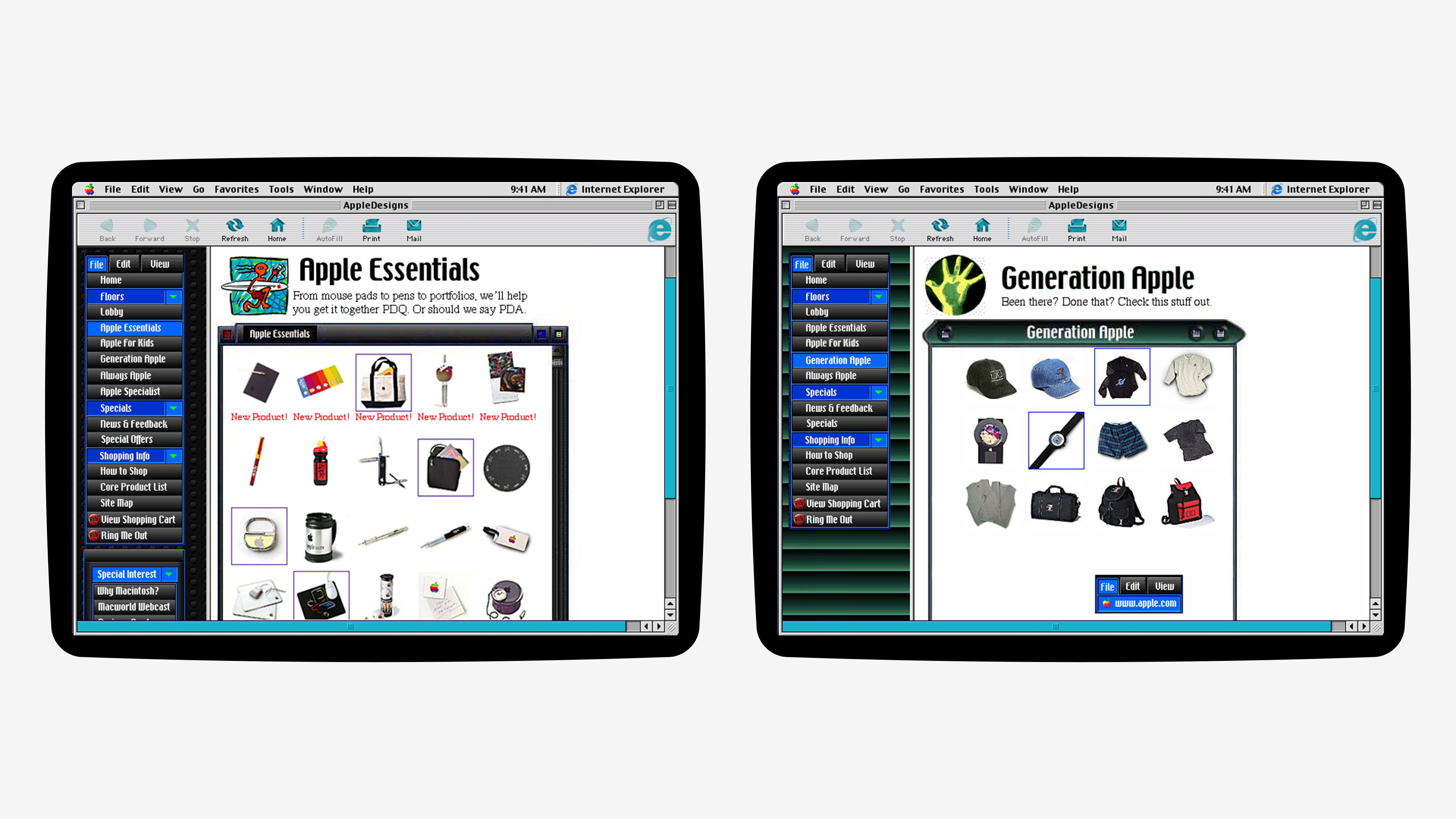 As online shopping plays a greater role in our lives this year than ever before, it’s worth remembering Apple’s early whimsical efforts that paved the way. Follow along on Twitter for daily Apple Store news.