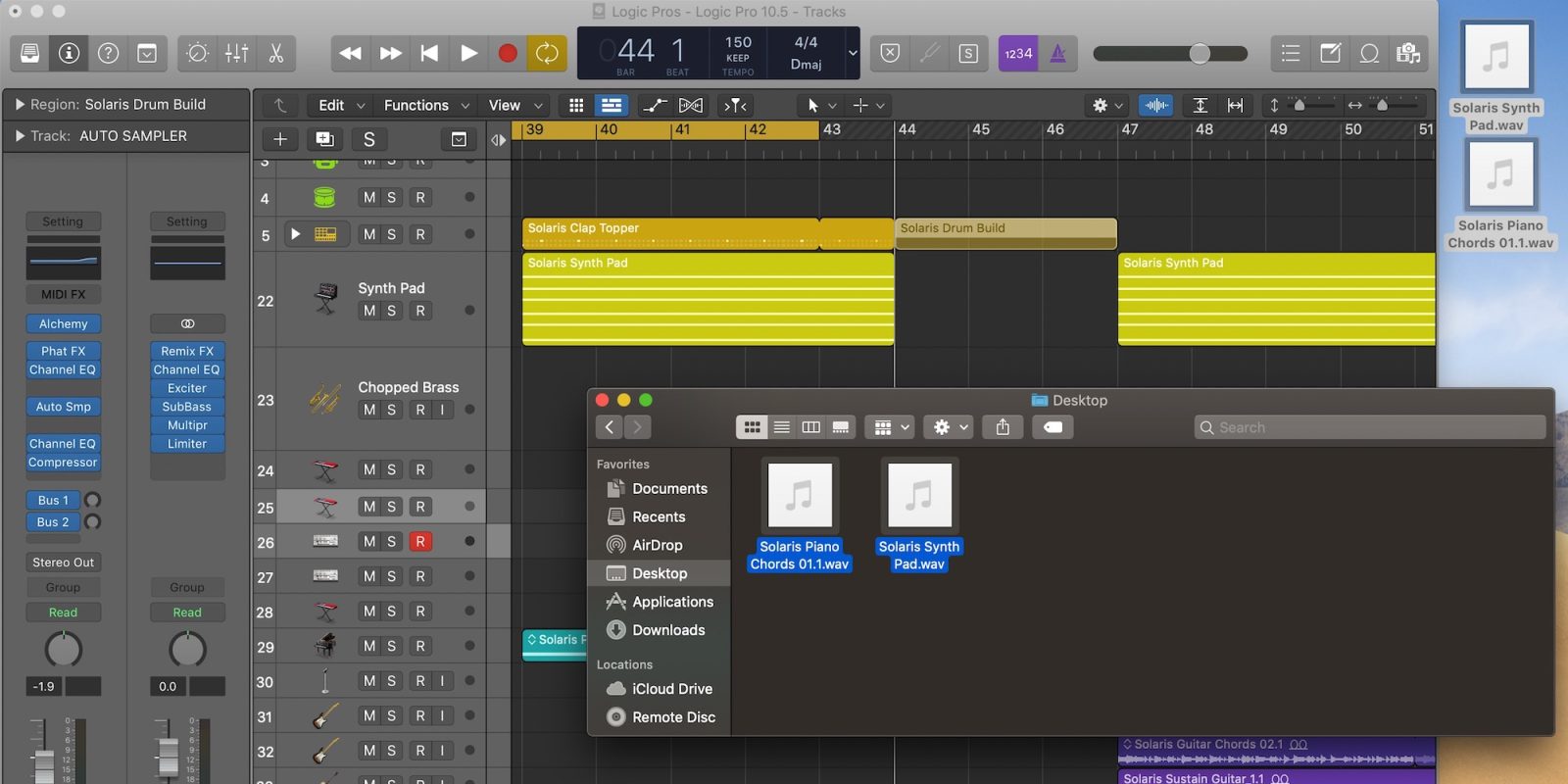 Today we are taking a closer look at the new Logic Pro X drag and drop export functionality. A trend you may have noticed through our recent exploration of LPX’s blockbuster new features — Sampler, Step Sequencer, Live Loops, more — is Apple’s focus on simple drag and drop control over our audio/MIDI. This has also notably extended to the way we can export tracks and regions from our Logic Pro X projects directly into the Finder, emails, and just about anywhere that will accept them. Hit the jump for a closer look.

Logic Pro X has always presented music makers with a versatile and almost fluid production environment — many of its most utilitarian features are accessible via various means to support a wide range of workflows. Exporting tracks, parts, and regions from the Main window tracks area, for example, could always be done with the right/control-click mini pop-up menu, up in the main File menu, with key commands, and more. But with the introduction of Logic Pro X 10.5 and the development team’s focus on the new intuitive drag and drop functionality throughout, even something as basic as exporting files in Logic Pro X is now more immediate and powerful.

After installing the 10.5 update, you’ll be able to access the new Logic Pro X drag and drop export functionality. There’s nothing overly complicated to go over here, but that’s essentially the point. Completely intuitive file sharing with as little hassle as possible. You can now just drag and drop regions from the timeline in the Main tracks area window directly into the Finder, into your email client to share a track or two with a collaborator, onto your Keynote presentation, or anywhere with a compatible drop zone.

Notably, this includes audio tracks and regions, or multiples thereof, as well as MIDI regions, much like the typical Export feature. You can grab just about any random group of regions on your page, a mixture of loops, audio and MIDI files, and more. Logic Pro X will just automatically create an audio file based on the instrument, FX, and settings in your project as it drops from your mouse’s grip to its destination.

The settings on the files you’re sharing through the drag and drop export here are based on those in the usual Export dialogue. In other words, Logic will just pull the settings last used in the Export window (main File menu > Export). From here, we can adjust the file format, bit depth, Normalize settings, naming schemes, and the way Logic will treat the FX plug-ins, audio tail (release settings, echo, reverb tails, etc.) and automation used in the project.

While simple and all things considered, maybe even arguably under baked, it is a particularly handy and immediate way to share regions. I have already found it useful for sending new recordings with collaborators and clients, but it would be interesting to see Logic’s traditional Bounce capabilities integrated into the simple drag and drop sharing possibilities here. It also doesn’t appear as though we can employ this handy new drag and drop export trick on cells via the Live Loops environment. Nonetheless, Logic Pro X’s new one-click export functionality is a welcomed addition that nicely complements the rest of the 10.5 update’s big-time new additions, and makes moving files around much easier.