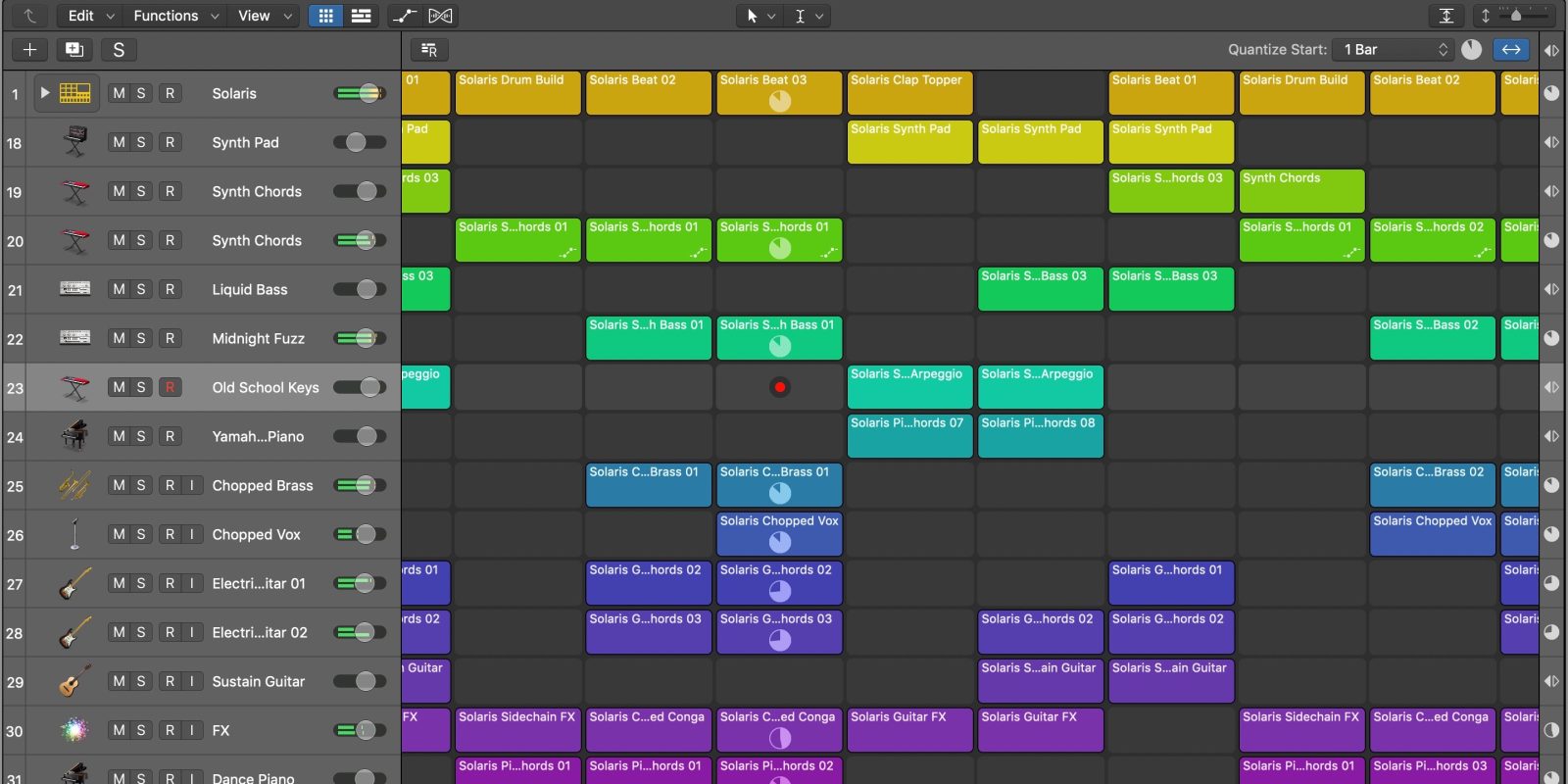 Apple lit it up last week when it dropped a massive new Logic Pro X update. Packed with stunning new features — some arguably 20-years in the making — Logic Pro X 10.5 is a game changer for anyone that loves to make music on a Mac. While introducing a stable of marquee workflow possibilities, the way these technologies have been thread through the experience in combination with other quality of life enhancements, provide much more than just Live Loops and Step Sequencers.

With game changing new workflows like Live Loops and more, the backwards compatible next-generation EXS24 known as Sampler, and the overhauled Drum Machine Designer, Logic Pro X 10.5 is insanely impressive, whether you like it or not. It’s such a wide-ranging overhaul, the 2,500 new loops, 17 Live Loops starter grids, 70 new Drum Machine Designer kits, and over 1,500 new patches — all completely free for all — hardly seem worth mentioning to some. But the gigantic list of interesting enhancements far reaches Logic’s new pillars of creativity.

You can expect an ongoing string of features (here’s a rundown of the major new additions) for all of the new gear as we run them through the paces in various recording situations and the like. But in the meantime, down below are some of the most immediate new features we have found incredibly interesting and helpful that might fall under the radar for some. There are plenty of overlooked goodies and lesser quality of life enhancements from the Logic Pro X update worth taking a look at as well. 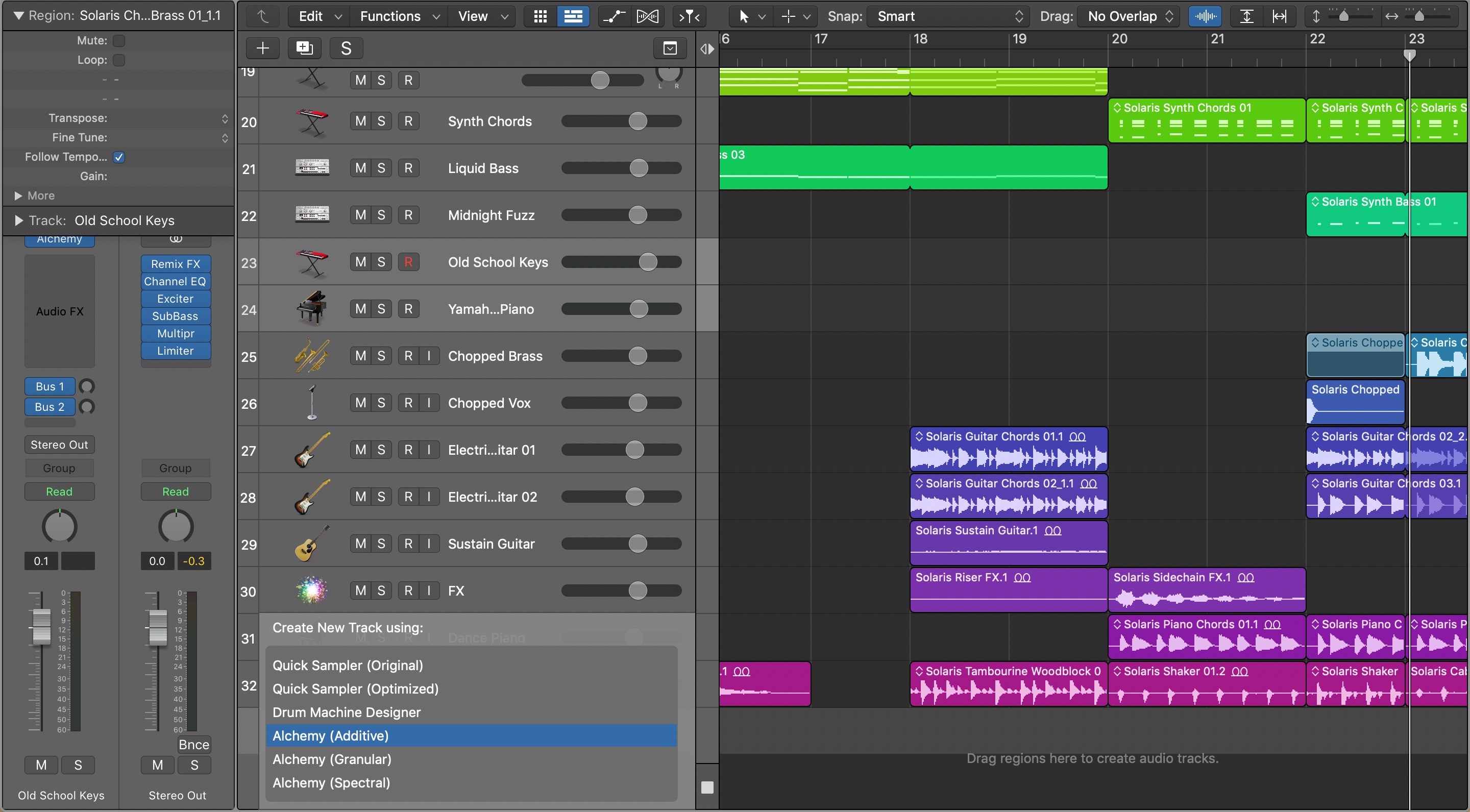 Apple has completely overhauled Logic’s sampling abilities, to put it lightly. EXS24 was already incredibly powerful, despite showing its age at every turn, but Sampler and its technology have now been thread throughout Logic Pro X 10.5 for a truly next level creative audio recycling experience.

As we briefly pointed out in our previous look at the latest advancements in LPX, Sampler, Quick Sampler, and Auto-Sampler are also joined by a sort of instant sampler function. Drag and drop any audio file (one or many), regions from some of your Live Loops scenes or Main Window timeline, or really just anywhere/the Finder to the empty area on the Track Header, and LPX will now present you with a series of new instant sampling options. 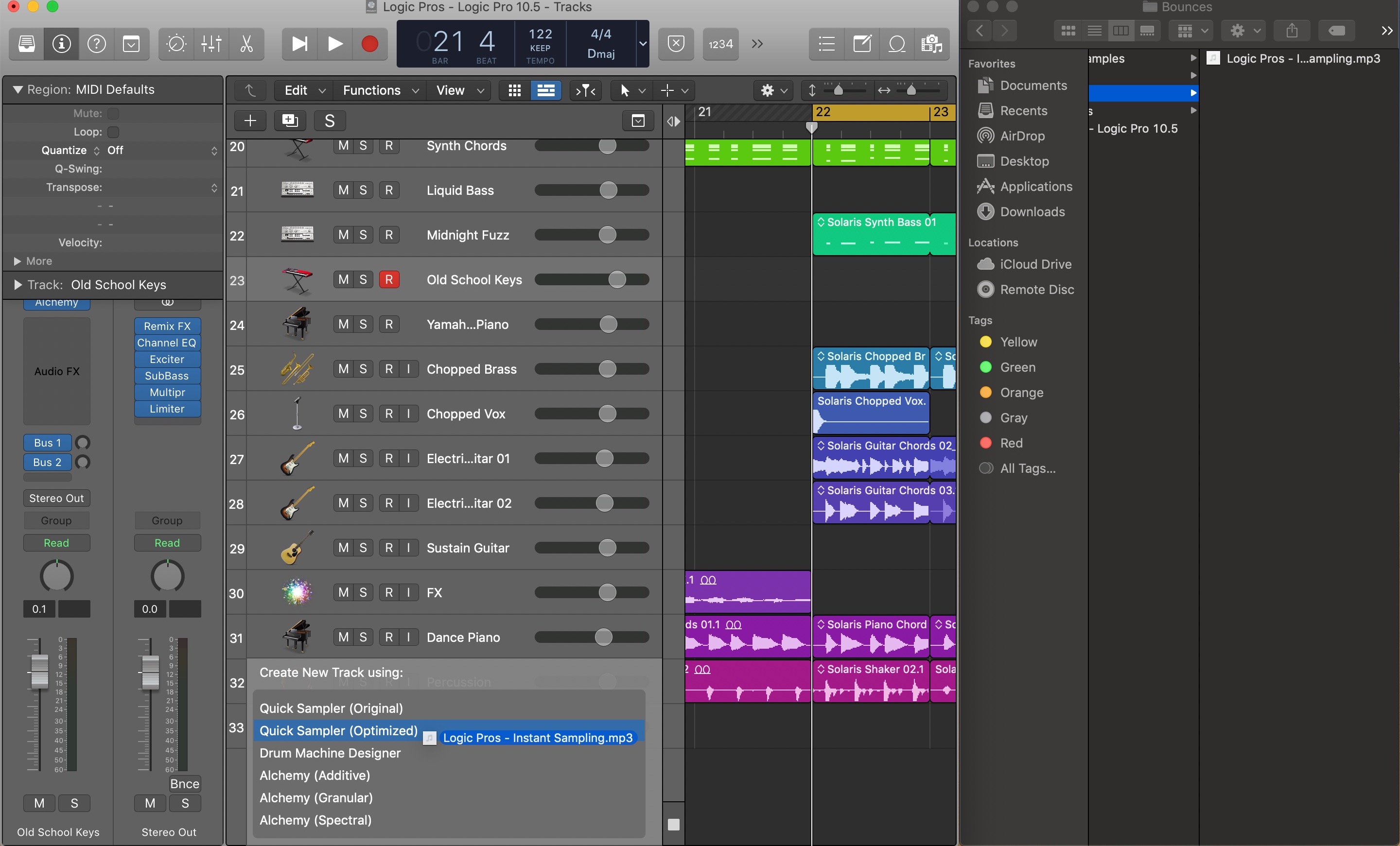 This immediate and dead-simple way of basically throwing audio files at the Track Header puts creativity first. Essentially any audio file you can see on your screen can be instantly transformed into a musical instrument to play, record, and recall in other projects at any time — or share with collaborators later — in a single swipe.

As you grab your audio and drop it on the Track Header you can choose to use the new Logic Pro X Quick Sampler, the updated Drum Designer to create a more drum machine-style instrument or get wild with Apple’s insanely powerful Alchemy software instrument.

Once you let go on your sampler of choice, a new track and instrument with your chosen audio/region is created automatically. The UI and the ability to make optional adjustments to your new instrument then pop-up before your very eyes. In typical use cases, I find Logic is just sort of making the right choice based on the content its being given — and likely the fact that you’ve chosen to use this instant sampling feature in the first place — without doing anything at all. But obviously, it’s up to you. 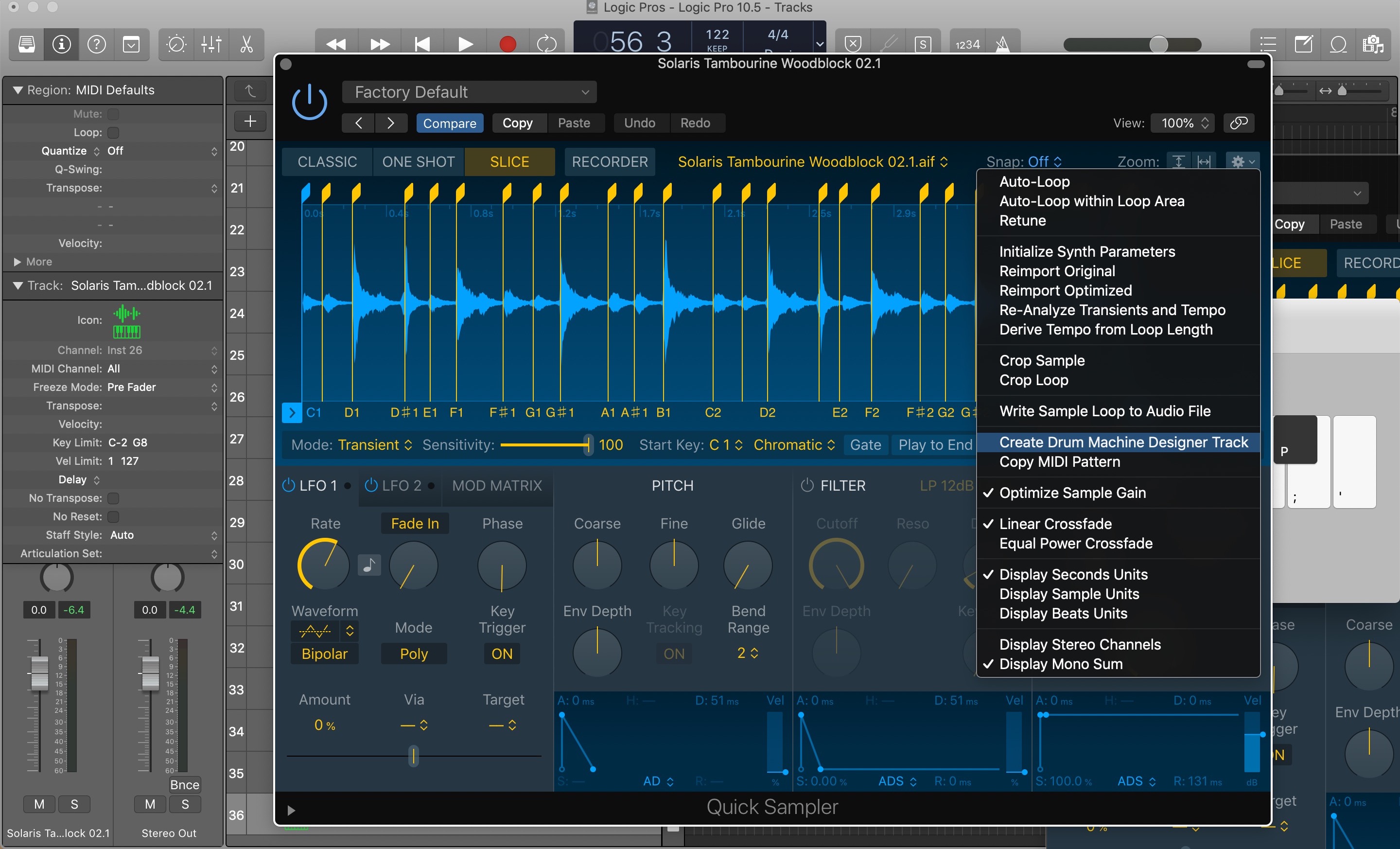 Here’s one interesting quick/instant sampling feature I found quite useful so far. Quick Sampler instruments created with drum loops, samples like that, or anything that makes use of the Quick Sampler’s “Slice” sampling mode it appears, can automatically be turned into complete Drum Machine Designer instruments/or tracks with a single click in the menu seen above. 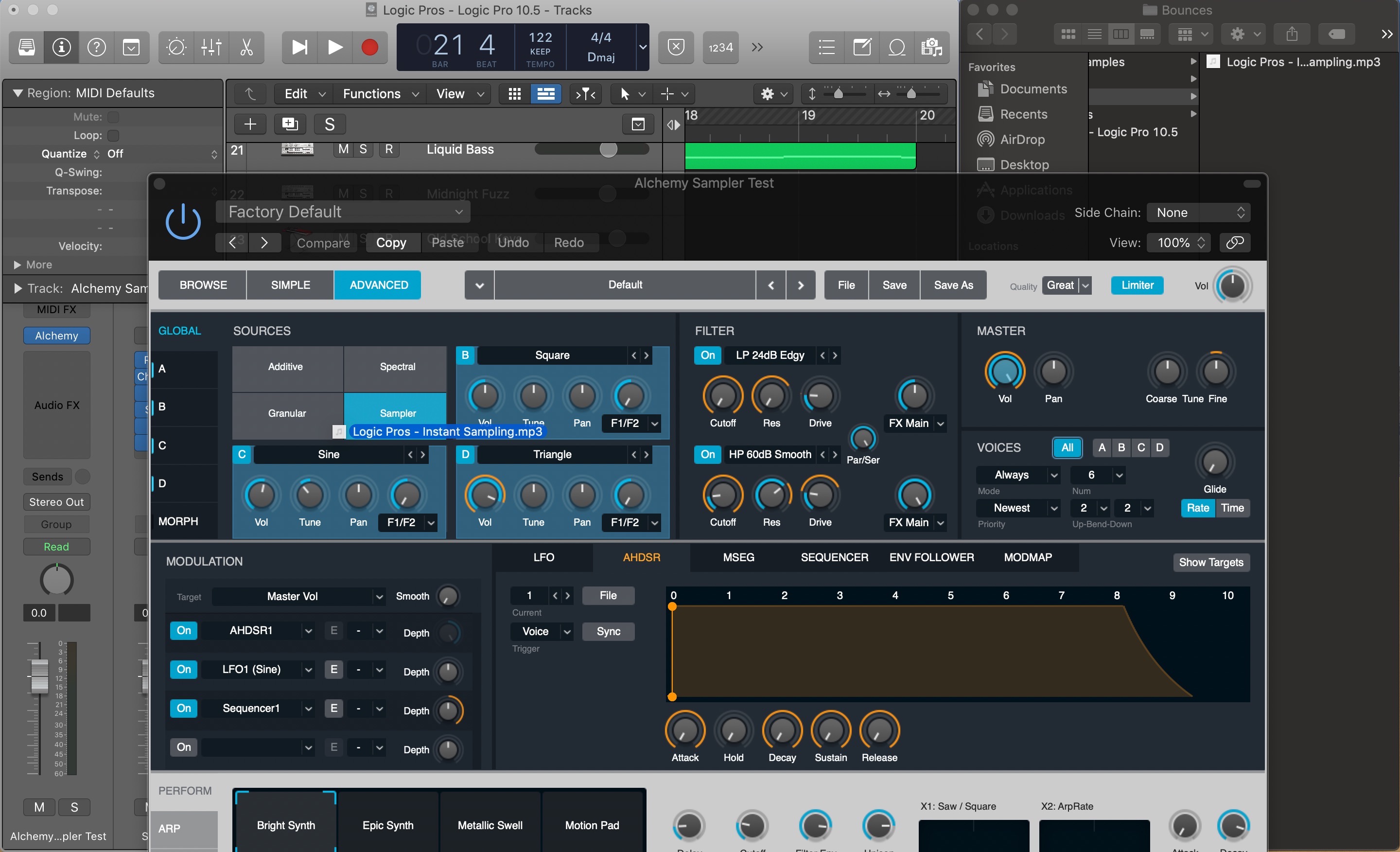 MP3 files can now be dragged directly into Alchemy. Much like the instant sampling features above, you can just drop any MP3 file from your Finder onto the Alchemy interface to instantly sample it with various sampling modes available (as seen above).

With the introduction of Live Loops — Apple’s new grid-based, freeform production workflow — comes a completely new way of interacting with your musical ideas. The familiar left to right timeline replaced with a more modular approach introduces the possibility of trading our MIDI keyboards out for those cool pad controllers that always felt like they were just for the Ableton folks. And while they largely still are, the introduction of Live Loops and support for Novation’s Launchpad lineup is starting to ease my jealousy already. After 15+ years on Logic Pro’s timeline, it’s going to take me more than a few days to fully embrace the vertically inclined Live Loops scene, but you can expect a much deeper dive into the brand new world of official Launchpad support in Logic Pro X soon.

Now, the Logic Remote app provides much of this same functionality on your iPhone or iPad, effectively transforming what was already an incredible multi-touch MIDI controller into an all-in-one Logic command center and Live Loops musical instrument hybrid. For me personally, its direct integration with Live Loops changes even the most entry-level iPad from an over indulgent luxury item into a workhorse creative instrument. However, anything more than slight tweaks for listening sessions on an iPhone-sized device doesn’t really cut it for me, and the comparatively affordable Launchpad gear could open up some particularly accessible creative possibilities for many. 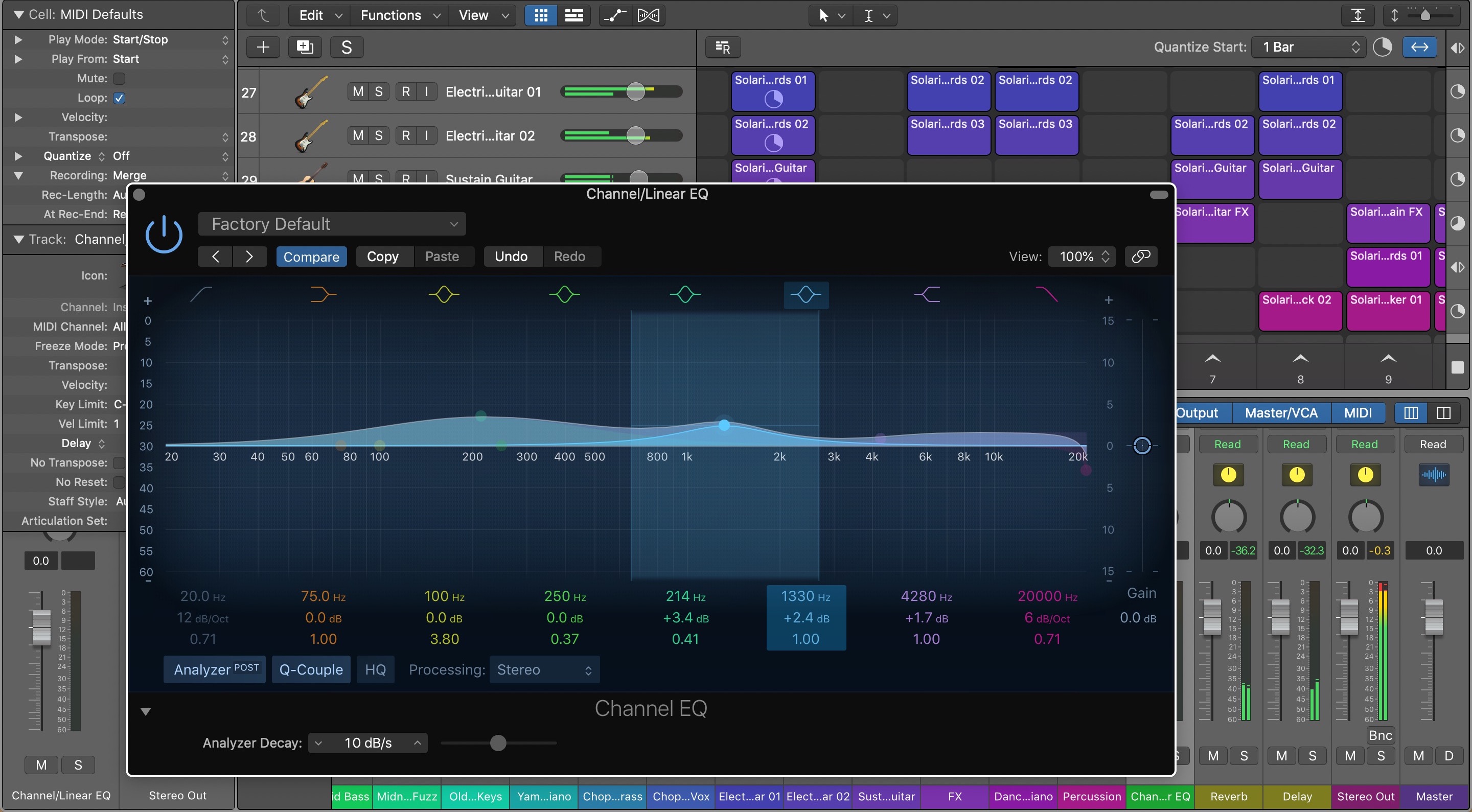 While not likely immediately noticeable to all, some pros and mixers will certainly appreciate some of the technical enhancements made to Logic Pro X’s in-house equalizers (Channel EQ, Linear EQ):

Have you had a chance to play around with the Logic Pro X update yet? Find any new features or changes? Have you already given up on the Live Loops and gone back to the timeline? Let us know below.