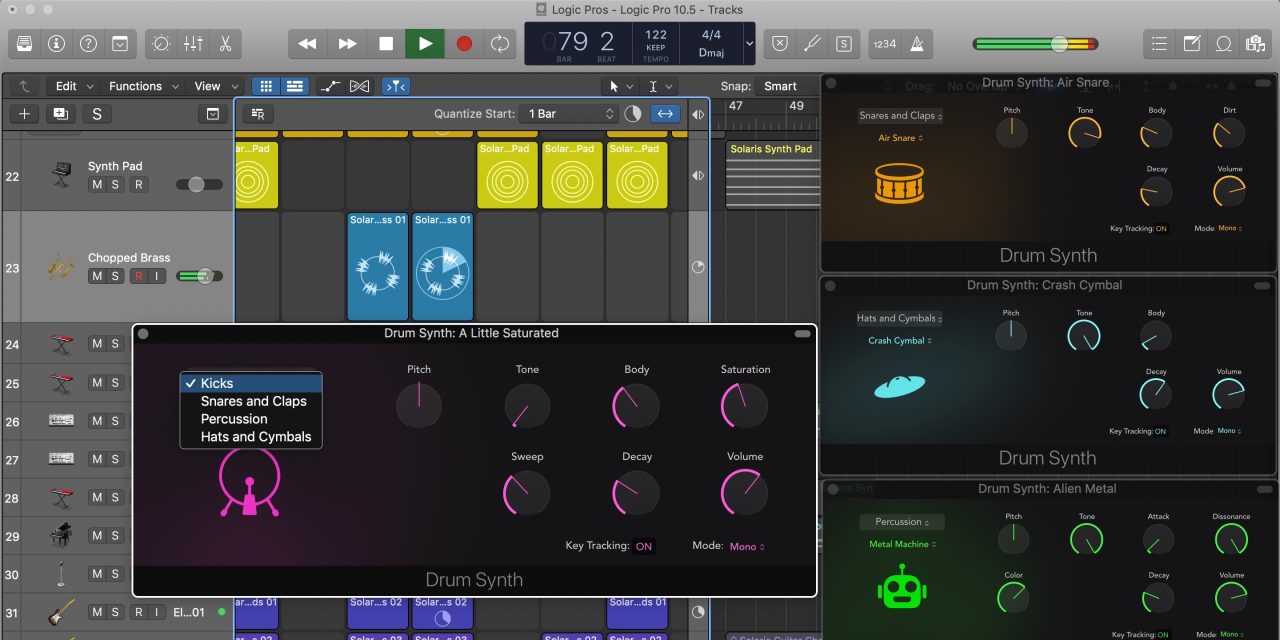 Apple introduced a collection of amazing new features and products in Logic Pro X 10.5, and Drum Synth is not to be overlooked. While the latest overhaul of Apple’s flagship DAW is jam-packed full of big-time features — Live Loops, the new EXS24 replacement, Sampler, and more — there are several enhancements that might not make it on the marquee. We previously touched on some of these features like instant sampling and enhancements to the powerhouse Alchemy instrument, and now it’s time to delve into the new Logic Pro X Drum Synth.

Fully integrated with Live Loops, Logic’s powerful new step sequencer, and more importantly, the completely overhauled Drum Machine Designer, Drum Synth is a new drum plug-in available for free to all Logic Pro X 10.5 users. As the name implies, this is a lightweight drum synthesizer — as opposed to a collection of drum one-shots and audio samples — that ranges from the hardest 808-style kick drums and snappy snares right through to more edgy vinyl-sounding reproductions and all the percussion and hi-hats in between. It’s clearly focused on the electronic side of things and won’t feature all of the layered goodness you might be familiar with from audio sample libraries and the like. While its actual synth engine and sound shaping control might immediately seem trimmed down from some of the more versatile synthesis-based software instruments out there, its contextual sound design controls have been whittled down to only the most important with a particular focus on simplicity and creativity.

If Apple were to make a drum synthesizer, it would probably be dead simple so anyone can use it, while still offering up just enough control over the sounds to do some serious damage right? Probably. And that’s exactly what it just did here. But don’t be fooled by how simple its sound design controls/synth engine appears, this is just one piece of the puzzle. I initially thought that it looked way too simple to be all that useful, especially with the new Quick Sampler now in everyone’s LPX arsenal. I was wrong.

All things considered, most other professional drum synthesizers have loads of other features built right into the interface — sequencers, multi-output control for each sound on the kit, built-in FX, etc. All of which can be integral aspects in the beat maker’s toolbox. But Apple doesn’t need to drag down the actual Drum Synth interface/experience with these extras as it already provides most, if not all of them,  directly in Logic Pro X 10.5 anyway. Any track in LPX can house a Sequencer, you can add as many FX as you want to any instance of Drum Synth, and you have the ability to stack up as many sounds as you want (including audio samples from other sources) via multiple instances of Drum Synth in the refreshed Drum Machine Designer. The point here being that Apple doesn’t need to impress us with all these “extra” features, it just fully integrates the instrument into a powerful infrastructure so it can distill the sound creation process to its most direct form.

First, let’s look some basics like where to find Drum Synth and the difference between using a single instance on its own or within the more powerful Drum Machine Designer environment. And then we’ll dig in to how to use Drum Synth by exploring its interface and sound design controls. 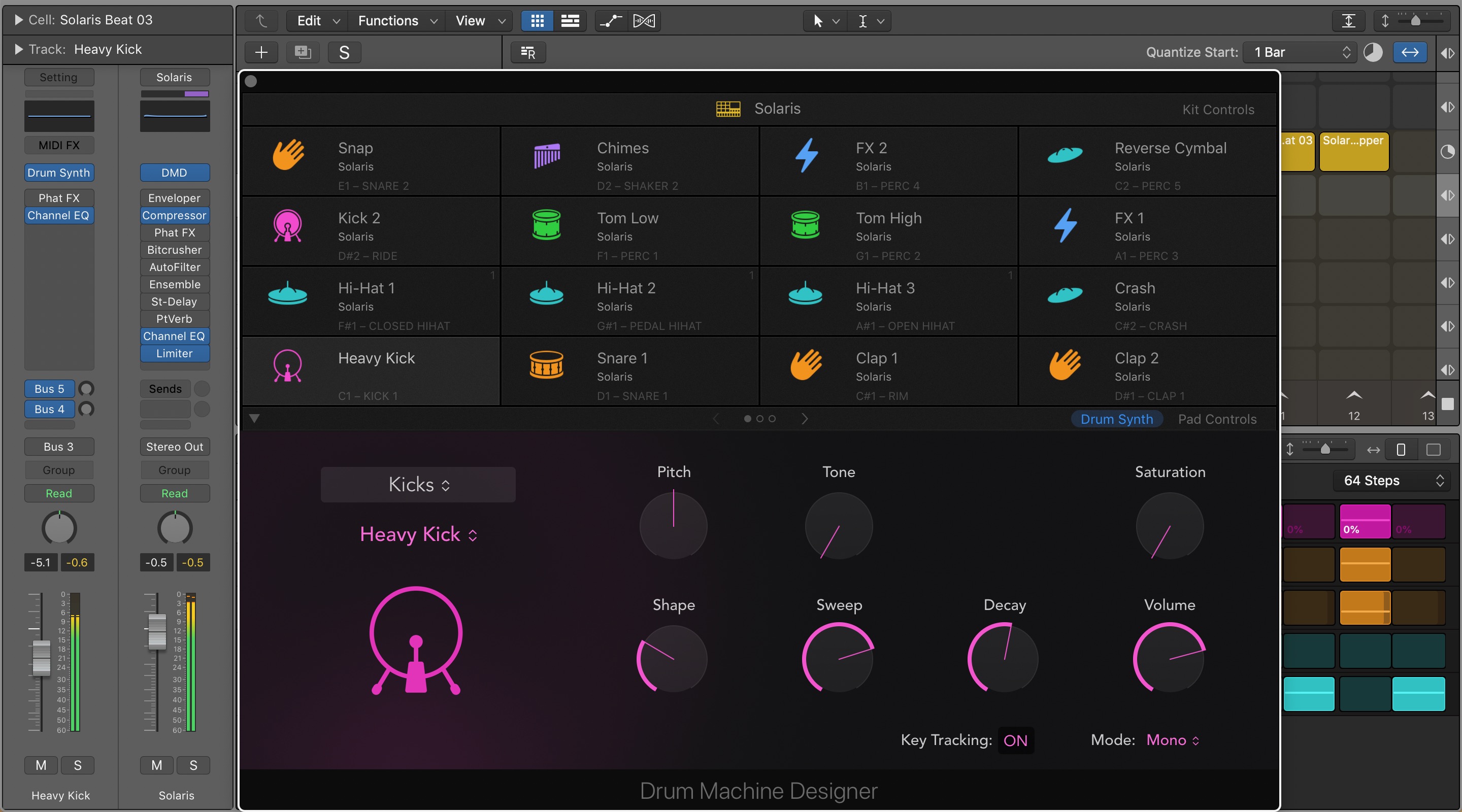 But there is one important element to understand here. It can be loaded up as either a mono or stereo instrument, but not a multi-output instrument with separate faders for each sound on the kit. While this might seem like an odd choice on Apple’s part at first, that’s what Drum Machine Designer is for. There’s no need to muddy the Drum Synth experience with extra features available elsewhere and in a much more integrated and versatile fashion:

If you want use Drum Synth as a sort of multi-instrument with each sound of your kit (Kick, Snare, Clap, Hi-Hat, etc.) loaded up in a single instrument, the Drum Machine Designer instrument will house as many Drum Synths as you need, as well as a combination of Quick Sampler instruments and more.

The Drum Synth interface is simple and to the point. On the left we have an area for choosing our sounds, and on the right we have a set of contextual controls to customize the pitch, tone, and overall characteristics of the chosen sound.

The bottom pull-down menu directly below that on the left houses each of the 5 to 8 drum sounds in the selected category. Don’t let the somewhat light-looking starter sound options fool you though, the sound design controls is where you really dig in and create tones to get the vibe you’re after. That’s on top of the usual collection of Apple-created presets — made from each of the drum sounds and accessible via the plug-in settings pop-up menu in the top left corner of the Drum Synth interface — in combination with more melodic sound possibilities that significantly expand the potential of Drum Synth beyond drums. Weird sci-fi stabs, sharp dance bass, odd synthetic music box plucks, and more join the expected hard-knocking 808’s and claps when you get creative with the sound design controls.

The sound design parameters on the right feature some familiar and self-explanatory options like pitch and volume as well as others particular to the sound you have chosen. Kick drum sounds have Shape and Sweep parameters whereas certain percussion sounds will have a Dissonance parameter not found on the snares, for example. This is even the case within drum sound categories as the Heavy Kick sound will have different sound design parameters available to it than the Hard Kick.

While I cannot help but want to have all of these parameters available to me no matter how bad of a musical choice they might result in to Apple’s ears, so far I have been quite impressed by the sound this thing is capable of. It goes hard when you need it to and can also be quite surgical in terms of the sound design possibilities for more delicate percussion and the like.

Along the bottom right of the interface we have the Key Tracking toggle and the performance mode options. With Key Tracking enabled, the selected sound will pitch across your MIDI keyboard (the 808-style kick drums etc. are all in tune when the Pitch parameter knob is set to 0), so you can play tuned kick drum bass lines, ascending pitch snare rolls, and more.

The performance Mode pull-down menu allows you to choose between Mono (one key on your keyboard will trigger at a time) or Poly (you can play multiple keys on your keyboard at once) playback, along with a Gate option. The Gate option essentially means the sound will play for as long as you hold the key down (the MIDI note’s duration), or stop playing back the second you lift your finger off the key. Just as a side note here or if something doesn’t appear to be working as you expected, the Decay parameter setting will come into play in terms of how long a selected sound’s playback will last. If it’s set too low, the sound can not sustain no matter how long you hold the key down.

Logic Pro X has always provided its users with sounds of this nature in some way or other. They were just slightly hidden away or a little bit more cumbersome to use when it comes to the typical ‘steal an 808 sound off the internet and sample it across my keyboard’ trend. Admittedly, the ancient-feeling Ultrabeat back-end that was previously responsible for Drum Machine Designer was rough at best for most pros. But just about all of these worries are no more with the new Drum Synth, Quick Sampler, and Drum Machine Designer.

It will be hard to convince your average drum machine plug-in fanatic that such a simple-looking instrument, with sounds designed by Apple, could stand up against the heavyweights. But with its direct integration in the greater LPX 10.5 experience and after having a chance to make some sounds with it, you’ll be hard-pressed to convince me it can’t.