AAPL up 3.4%+ in first day of trading following stock split [U] 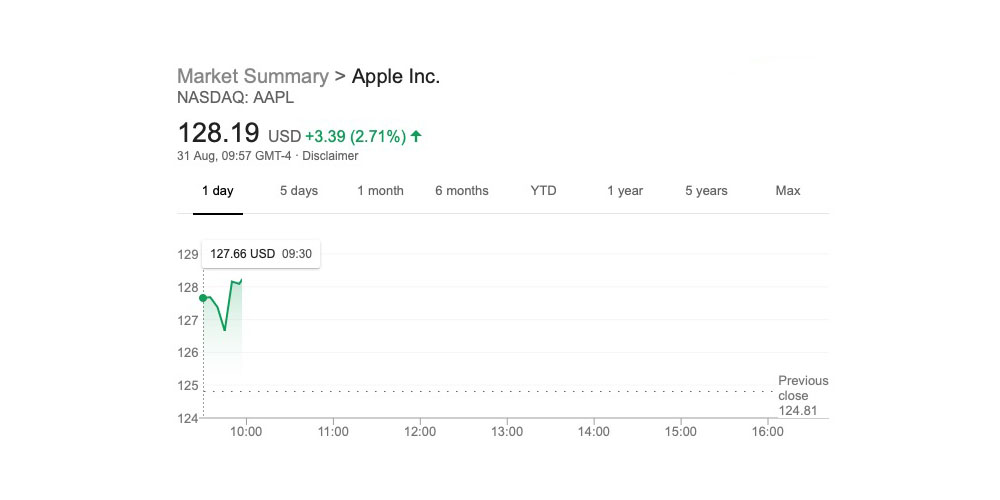 At the time of writing, AAPL has been hovering in the 2.5% to 2.9% range above its adjusted closing price …

Apple announced last month that it would be implementing a stock split in order to make AAPL more affordable for small investors.

The Board of Directors has also approved a four-for-one stock split to make the stock more accessible to a broader base of investors. Each Apple shareholder of record at the close of business on August 24, 2020 will receive three additional shares for every share held on the record date, and trading will begin on a split-adjusted basis on August 31, 2020.

In theory, fractional investing makes this a non-issue: you can simply use a third-party app or service to buy less than a whole share. But less financially sophisticated investors may not know of this, and simply think that AAPL is out of reach when a single share costs $500+. A share price closer to $100 makes it seem more affordable.

There’s also a difference between theory and practice when it comes to AAPL’s market cap. Simply swapping each share for four shares worth a quarter of the original value has no impact on the worth of a company. It’s no different to swapping a dollar bill for four quarters. But in practice, share prices often rise after a stock split following increased demand.

These days, either rise seems like nothing: AAPL has so far increased in value more than 70% in the year to date.