Apple Watch Diary: A comparison with the Withings ScanWatch 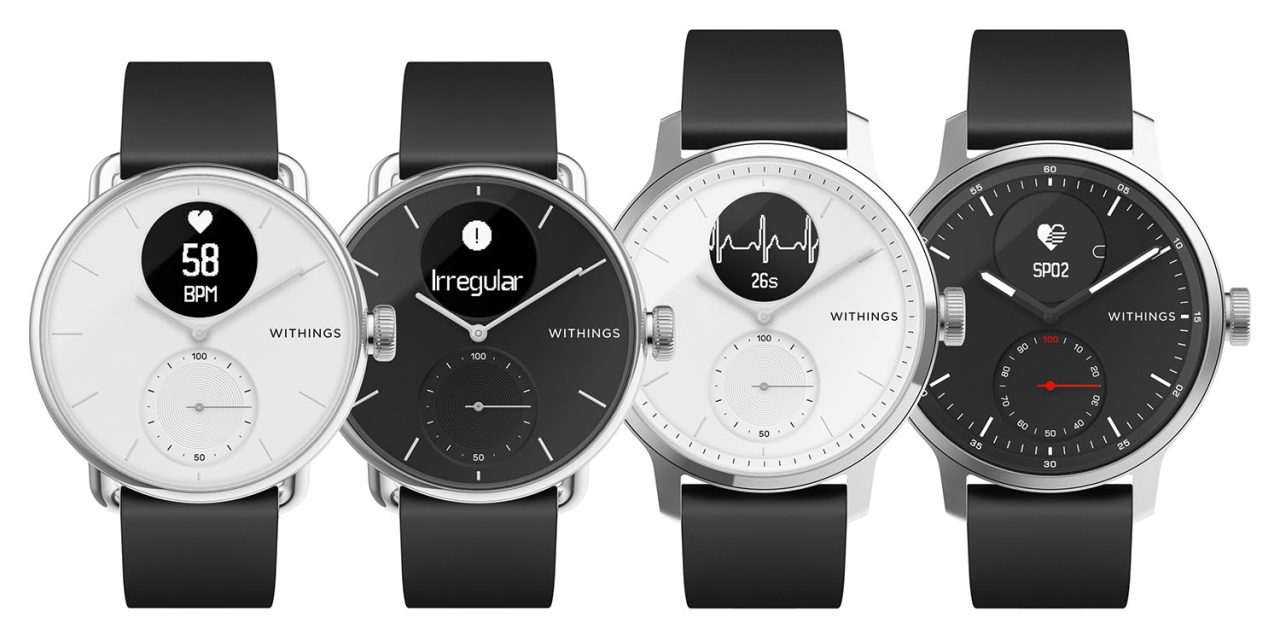 My Apple Watch is so much a part of my life now that I don’t even notice I’m putting it on. The Withings ScanWatch is a very different type of smartwatch – which was why I thought it would be interesting to try one.

It’s a more sophisticated version of the Withings Steel, and is available in Europe now, but awaiting FDA clearance to go on sale in the US. It’s a predominantly analog watch, with a small digital display. And unlike the Apple Watch’s 1-2 day battery life, it claims a battery life of 30 days – with a further 20 days in reserve mode, where it switches off the digital display while continuing to tell the time and measure activity …

The differences, and similarities

The primary difference between the two devices is, of course, the form-factor. The Apple Watch is entirely digital. The ScanWatch is a very conventional-looking analog watch. Most people wouldn’t, I think, give it a second glance. The only thing which stands out when you take a closer look is a black circle occupying around 20% of the watch face.

That’s the digital display, but as it’s off by default, it again doesn’t immediately shout ‘smartwatch.’ I personally think it’s simple, stylish, and understated. I could definitely live with this on my wrist full-time, and I think many of those who dislike screen-based smartwatches would like this. Certainly my girlfriend, who completely rejects the idea of a screen on her wrist, said this was acceptable (though the 42mm version I tested was too large for her, she thinks she’d be happy with the 38mm one).

With GPS, altimeter, and accelerometer, activity monitoring offers very similar capabilities to the Apple Watch. It offers workouts for 30 different types of exercise. For outdoor ones, it measures distance, speed, and elevation, together with a map of your path. By default, it automatically tracks walking, running, swimming, stair-climbing, distance, and calories burned.

The ScanWatch is actually more capable here than the Apple Watch. It has the same heart-rate monitoring, Afib detection, and ECG functions. But it also has a medical-grade oximeter to measure oxygen saturation (O2 sats), as well as detecting breathing disturbances while sleeping.

Surprisingly, the ScanWatch can also display the same range of notifications as the Apple Watch, despite the tiny digital screen. I used it with Calendar, Messages, and Phone on (and Mail off). I also switched on my main third-party apps, like CityMapper.

The Apple Watch of course has one huge advantage over any third-party smartwatch: it’s part of the Apple ecosystem. More on this next.

Not being part of the Apple ecosystem is the single biggest drawback of the ScanWatch compared to the Apple Watch. Three examples made themselves immediately apparent.

First, my Apple Watch unlocks my Mac as soon as I wake it; the ScanWatch can’t do that.

Second, my Watch is my primary method of paying for things. Contactless is ubiquitous in London, and I literally can’t remember the last time I pulled a card out of my wallet. ScanWatch can’t do that either, and that’s huge.

Third, there’s of course no Siri access. I use Siri a lot to dictate replies to messages as it’s just so quick and easy.

The display has a similar raise-to-wake feature as the Apple Watch. This is off by default, and it isn’t as useful, as the only thing it displays in normal use is the date (though we could probably all use a reminder of that in these lockdown days …). But it can be partly blocked by the watch hands, and it is in any case less reliable than Apple’s implementation, so I tried it but soon switched it off.

Notifications are another significant difference. Yes, ScanWatch can display them, but the tiny display means that messages have to scroll across the screen.

I have to say, Withings implements this way better than I’d expected. I was expecting notifications to be all but useless on that display, but the scroll speed is just right – fast enough to display information in a reasonable time, but remain readable. It also automatically scrolls them twice, so if you didn’t raise your wrist quickly enough to see it the first time, you’ll catch the repeat.

Notifications work perfectly well for short things, like calendar appointments and ‘Get off at the next stop’ alerts from CityMapper. However, it isn’t very practical for text messages – it just takes too long to scroll even at the brisk speed it uses. I tried having it on for things like WhatsApp, and it just wasn’t practical so I disabled that.

Activity tracking is similar to the Apple Watch in terms of the data collected in the app (which can be linked to Apple’s Health app), but while the Apple Watch rings provide an at-a-glance look at how you’re doing in terms of movement, exercise and standing hours, the ScanWatch can only display one thing at a time.

The ScanWatch has an analog dial in the 6-o’clock position, which would be a stopwatch on a conventional watch. On the ScanWatch, this is an activity tracker, running from 0% to 100% of your goal. By default, it displays the percentage of your step goal. It can, however, measure any workout activity with a goal, but only while that workout is active.

The ScanWatch does, however, have some advantages over the Apple Watch.

The most obvious of these is the battery life. Withings claims 30 days. That seems plausible: I was playing with it a lot more than would be typical, and it lasted exactly 21 days. The sheer convenience of being able to put it on and forget about it for a few weeks is a much better experience than the Apple Watch’s need for daily charging (two days at a push).

In particular, it makes sleep-tracking much more practical. With the Apple Watch, you have to be pretty organized to use it to track your sleep: you need to either take it off in the evening to charge before bed, which is a pain, or charge it as soon as you wake and then put it back on just before you leave your home or start work. With the ScanWatch, you just leave it on 24/7.

Speaking of sleep-tracking, the ScanWatch is much better at it than Apple. We had a really bad mosquito problem one night, which saw me woken four times when I was bitten. The Apple Watch didn’t show any of these periods of being awake; the ScanWatch specifically monitors for sleep interruptions and showed them all.

Compared to most Apple Watch models, the ability to see the time without having to raise your wrist is a minor benefit – though more to those around you! With relatively few people wearing watches at all these days, it’s not unusual to have a friend glance at my wrist and ask me the time. With the ScanWatch, they can see it for themselves.

When I want to know the time myself, I find turning my wrist toward me 100% reliable on my Apple Watch Series 4, and of course the Series 5 has the always-on display. However, we found that does come at a cost to battery life, so the ScanWatch does still have an edge here.

Finally, many would consider the traditional watch look a huge advantage. Indeed, that would, for them, be the primary selling point; more on that in a moment.

When it goes on sale in the US, the Withings ScanWatch will cost $279 for the 38mm model and $299 for the 42mm one I tested. Given that you can buy a Series 3 Apple Watch for $199 for 38mm or $229 for 42mm, that makes the ScanWatch a relatively expensive purchase for a (mostly) less-capable device.

But I think that’s pretty much irrelevant: despite the substantial overlap in capabilities, these are different devices appealing to different people.

I wore both Apple Watch and ScanWatch for three weeks – one on each wrist. I have to say, I liked the ScanWatch a lot more than I expected to. I prefer the look of it to the Apple Watch, and it was the ScanWatch I would glance at when I wanted to know the time. I also looked at that to see my step-count (or, rather, an indicative look at the rough percentage – which is what I really want to know). I’m actually going to miss wearing it.

For me, the lack of Apple Pay makes it a non-starter as a replacement for my Apple Watch. I use my Watch to pay for 99% of purchases, with Express Transit making it particularly convenient for use on public transit services in London.

Much as I’m a minimalist who really likes the clean design of the ScanWatch, I’m also a bit of an information junkie. The Infographic face is the one I use almost all the time (with occasional flirtations with the Siri one), and I like having at-a-glance access to things like weather and my next calendar entry. It’s also a really convenient way to do things like read messages while mobile, and while the ScanWatch scrolling works far better than expected, it’s still not in the same league as being able to read an entire message at a glance.

But if you’re someone who rejects the idea of a screen on your wrist but would still appreciate smartwatch capabilities, I think the ScanWatch could well appeal. It’s certainly the only other smartwatch I’ve seen so far which has intrigued me enough to try it. The ability to just wear it and forget about charging it for a month will also give it much greater appeal to non-techies.

And even me … if it had Apple Pay, I might choose to wear it instead of my Apple Watch some of the time. When dressing up, whether for a posh night out or dancing tango, I might well put this on instead. I liked it that much.

The Withings ScanWatch is available now in the UK and other European countries. It will come to the US once it has been certified by the FDA.