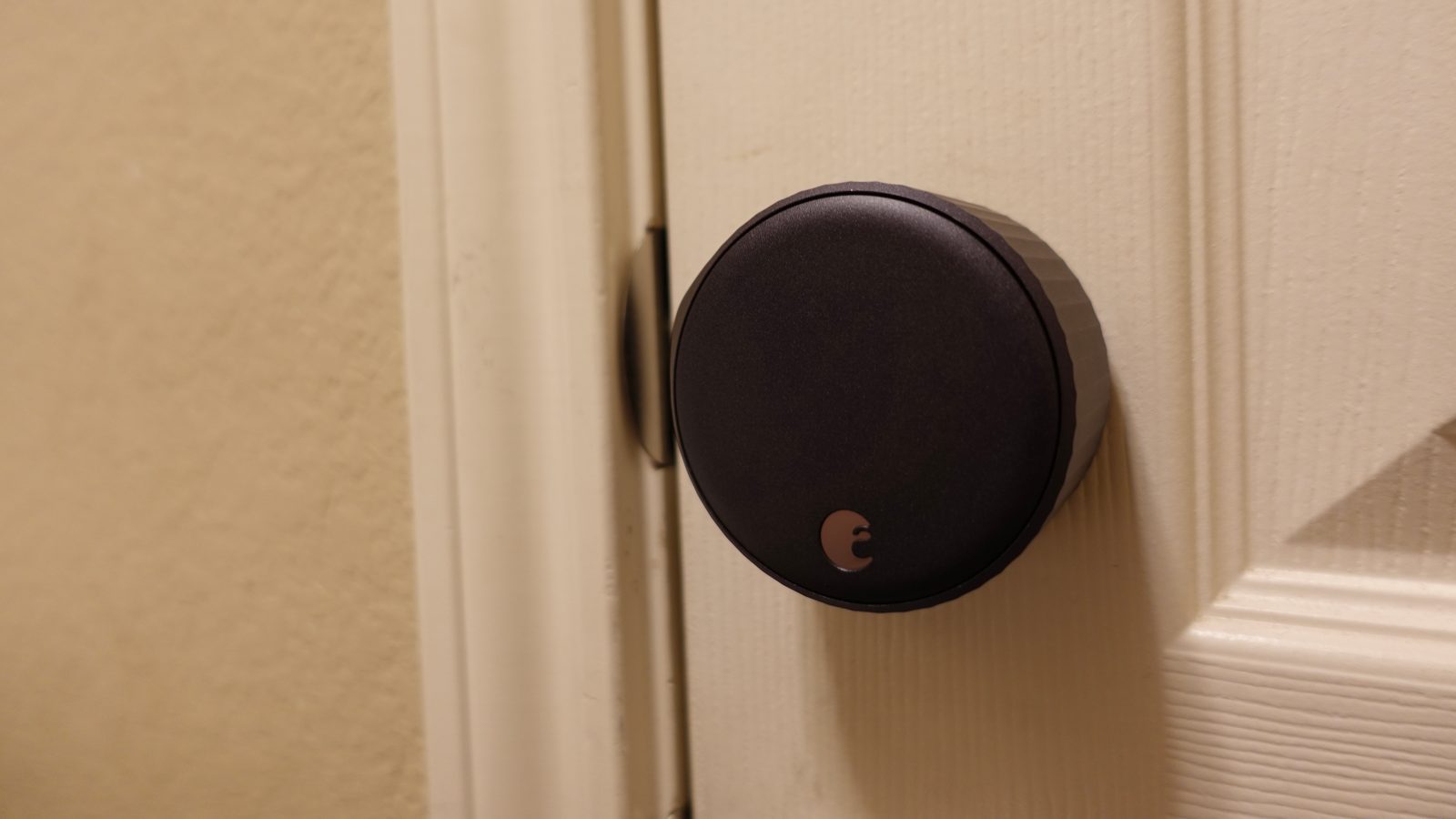 August has been a household name in the smart lock industry for many years, serving as one of the most popular options for people who want the benefits of a smart lock without replacing their existing lock.

Over the summer, August unveiled its new Wi-Fi Smart Lock that is significantly smaller than its previous smart lock products and features integrated WiFi connectivity. There’s also HomeKit support, which is a must-have for any smart home accessory I use nowadays. Read on for more.

I use the August Smart Lock Pro on my front door, so I decided to put the new Wi-Fi Smart Lock on the door that opens to the laundry room. The smaller design of the Wi-Fi Smart Lock has a notable benefit in real-world use, beyond the obvious visual appeal.

Installing an August smart lock, including the Smart Lock Pro and the Wi-Fi Smart Lock, is straightforward. After you remove your existing lock’s faceplate, you simply mount the August plate and use two clips on the back of the August lock itself to snap it into place.

Earlier this year when I got the last-generation Smart Lock Pro, I first attempted to install it on my back door but it didn’t fit. My back door has a windowpane in the center, with crown molding around the panes. The size of the lock caused the clips on the back to extend over the window’s crown molding, preventing me from properly snapping them in place.

The rest of the setup process for the Wi-Fi Smart Lock is just as straightforward. Once the lock is physically installed, you connect it in the August app, then add it to the Home app via the HomeKit code that is located on the inside of the lock’s faceplate.

In terms of battery life, August claims that that the Wi-Fi Smart Lock will run for 3-4 months. It’s powered by two CR123 lithium batteries, which are less convenient than the AA batteries used in the Smart Lock Pro, though this change likely contributed quite a bit to the size reduction with the Wi-Fi Smart Lock.

In the August app, I recommend setting up the Auto-Unlock feature, which will automatically unlock your door based on your location. While you can achieve similar automations in the Home app, but HomeKit will require confirmation before running any automation that includes smart locks.

The August app’s version of Auto-Unlock has been rock solid in my testing, and I’ve never noticed it unlocking when it shouldn’t have. Of course, the decision here is really up to you, and based on whether or not the added security benefit of using HomeKit automations is worth the inconvenience of having to manually approve the automation each time it runs.

The Wi-Fi connectivity of the August Wi-Fi Smart Lock is useful primarily through the August app itself, which does improve performance and reliability. Ultimately, though, it would be nice if August’s HomeKit implementation eventually started working through Wi-Fi rather than Bluetooth.

The August Wi-Fi Smart Lock comes at the steep price of $249.99. It’s actually $30 cheaper than the Smart Lock, but $250 is still a steep price to pay for a smart home accessory.

The biggest benefit of the Wi-Fi Smart Lock is that it fits over your existing deadbolt. This makes it the perfect option for people who are renting or simply don’t want to change their locks, and it dramatically simplifies the installation process.

If you already own the August Smart Lock Pro, the reasons to upgrade to the new Wi-Fi Smart Lock are minimal unless you are really fond of the size reduction. This is especially true for those who use the August smart locks primarily through HomeKit, since Bluetooth is used either way.

The versatile design and installation process, paired with the rock solid performance, makes the August Wi-Fi Smart Lock one of the best smart locks on the market as long as you can justify the price. It’s available on Amazon in sliver and black.