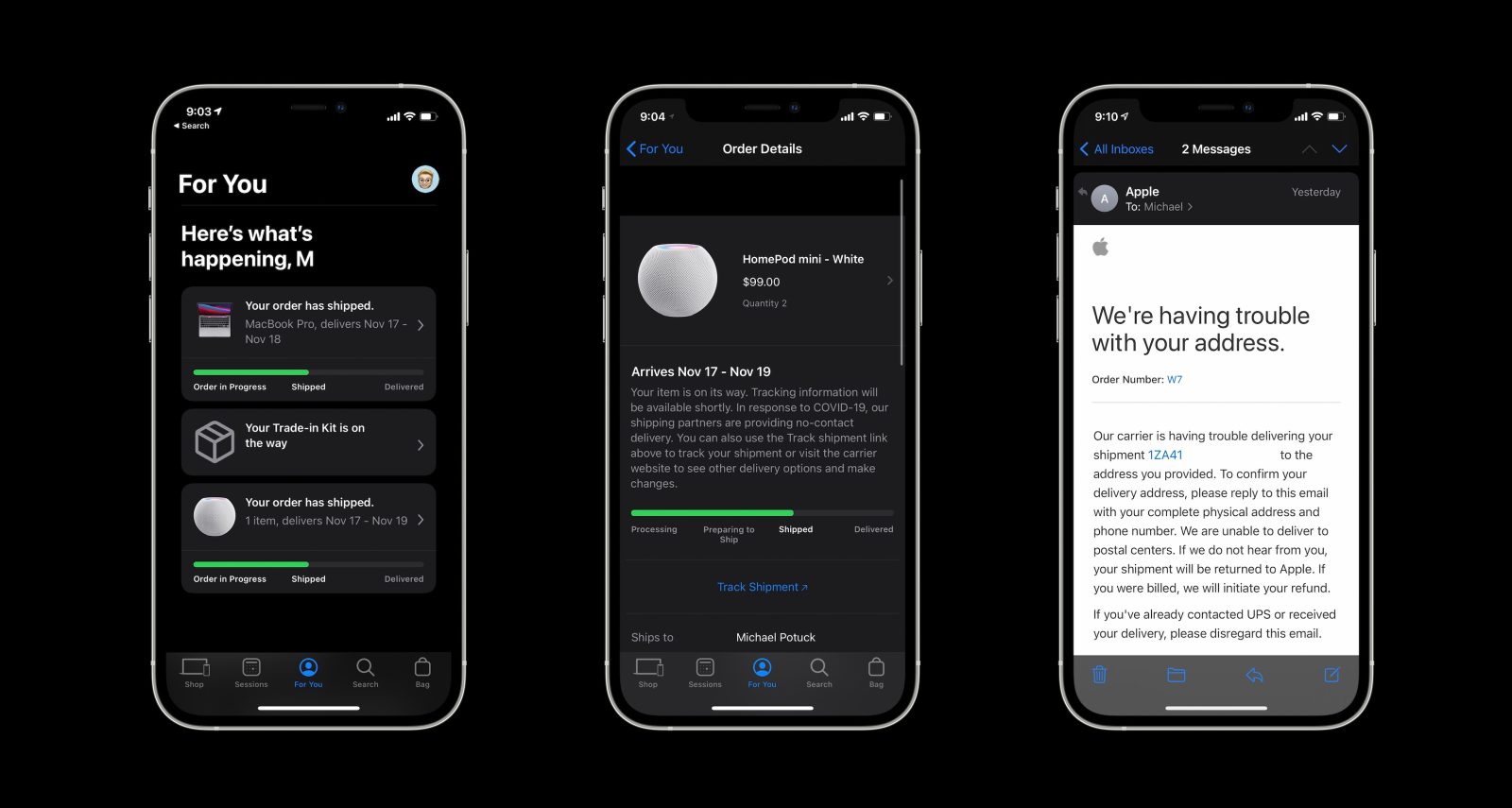 If you’ve recently made some Apple purchases and are eagerly awaiting their arrival, the status shown on the Apple Store app or Apple’s website might be a bit confusing or even alarming in some cases. Notably, if UPS or FedEx is having trouble with your delivery, Apple is also sending out address confirmation emails.

Update: Big picture, logistics are tough. Today a report from India Today noted a delivery person running off with 14 iPhone 12 Pro Max devices and was caught shortly after. But that pales in comparison to the semi-truck heist we just saw in Britain that included $6.6 million worth of stolen Apple products!

Update 2: On a personal note, my MacBook Pro just arrived after the “misrouting” and was sadly dropped badly enough that the chassis is damaged in at least two places. Will have to do a swap here, luckily I ordered a stock configuration.

There are a few things going on that we wanted to point out to clear up any confusion or possibly concerns that you’ve had an Apple order stolen from your porch.

First, we noticed some delays with a new MacBook Pro, which is understandable but the Apple Store app adds some confusion. Here’s what I experienced…

This past weekend, the delivery estimate for my new MacBook Pro was for November 16th. On Monday the 16th, it slipped to the 17th. And then it changed to the 17th-18th in the Apple Store app. All understandable.

But as it turns out there was another wrinkle, UPS “misrouted” the package and it was in limbo for some 24+ hours. It seems that may have created some trouble on Apple’s end. While the delivery date estimate showed on the Apple Store app and Apple’s website came and went, UPS updated it to the 19th after the misrouting was solved.

But Apple’s estimate remained the same for the 17th-18th (even today, the 19th). Scenarios like this might make some people concerned that their package was stolen, especially if you just quickly glanced at the app and didn’t check in with UPS.

Then came an email from Apple to confirm my address (9 pm on the 18th). At first, I thought it was a scam of some type. I didn’t see any alerts in the Apple Store App and the wording about canceling my order if I didn’t respond sounded strange.

However, I checked the email and it indeed came from an apple.com domain and the links in the email sent me to apple.com and my account with the accurate order details. So I felt comfortable responding with my address and phone number to confirm it.

The curious part is I’ve never had an issue with my address with UPS including recent Apple orders that arrived with no problem over the previous weeks and the countless other orders we’ve had delivered this year via UPS. That makes it seem like Apple’s system didn’t know how to handle the UPS misrouting properly with a lack of updates in the Apple Store app and the rare “We having trouble with your address” email.

Another confusing experience has been the HomePod mini. I ordered 2 of them from Apple and on the main Apple Store app landing page it highlights “1 item” but when tapping on the order shows “Quantity 2.”

Funny enough, they’re being shipped separate and have different delivery dates. But on first glance at the Apple Store app, it gives the impression only 1 was ordered/shipped.

Have you noticed similar issues with your recent Apple orders? Share more down below in the comments!