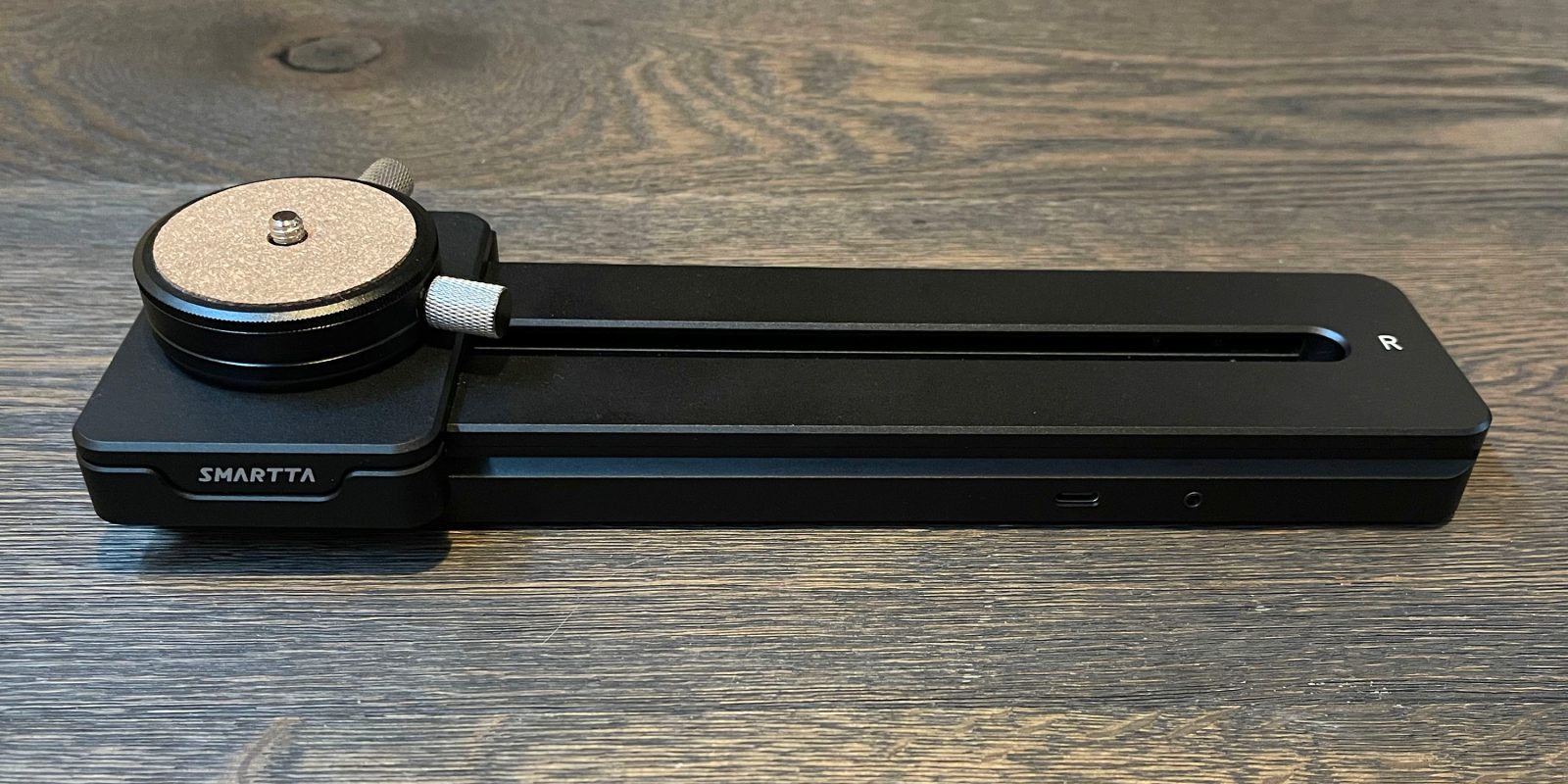 The Smartta SliderMini 2 is a portable, motorized, iPhone-controlled version of a piece of film-making kit that is usually none of those things. It can be used with anything from an iPhone to a mirrorless camera to a DSLR …

A slider is designed to give you smooth panning shots by allowing the camera to slide along rails. Large ones can be several feet long and require a skilled operator; the SliderMini 2 is a little over 10 inches long, and using it requires nothing more than pressing a button – either on the slider itself or in the companion app.

The most common slider shot you’ll see is a horizontal pan, but you can also shoot in the direction of travel for a zoom in or out. Add a ball-head, and you can move vertically too, though with a much lighter payload. You can see examples of each in the video below.

The slider is a relatively featureless hunk of black metal with a moveable base sitting atop it. In production models, you can unscrew the quarter-inch thread to reveal a tripod screw beneath. Mine was a pre-production one, so I had to attach the included rotating mount on the top. This adds flexibility anyway, as you can mount the camera at different angles.

There are L and R markings for left and right, a single (very subtle) button at one end, and equally subtle (and absolutely tiny) battery-life LEDs.

Smartta makes much of the portability of the device, suggesting it can be carried in a camera bag, attached to a tripod, and then used in outdoor shoots. This is true, but while the device is reasonably compact, its solid metal construction means that it’s pretty heavy, at around 1.5 pounds, so it’s not something you’re going to carry casually.

On the plus side, it feels really solid and well-built.

In use: Standalone mode

The SliderMini 2 couldn’t be easier to use in standalone mode. Attach your camera and press the button. The slider will then move slowly from left to right, taking 20 seconds to complete the journey. Press the button again, and it will do the same thing from right to left.

The 10-inch track length is quite a lot when used in a studio environment, close to the thing you’re shooting. It is, though, pretty subtle in most outdoor shots. That said, you can definitely use it for reveal shots in some settings – where you start with the camera around the corner of a wall, for example, then slide the scene into view.

In use: Using the app

I love the design of the app: it’s minimalistic, clear and really easy to use. The main screen is a rotary speed control for the slider. You can freely adjust this anywhere between the maximum speed of 20 seconds down to the minimum of 33 minutes and 20 seconds. Once you’ve set your speed, just hit the right or left arrow to start. An indicator in the app shows you the position of the slider.

There are also four additional modes:

I got the chance to do some experiments, which impressed me and made me quite excited to use it for something real. I was hoping to get the chance to put together a video that incorporated MiniSlider 2 footage, but the latest London lockdown and being left without a mirrorless camera while doing a trade-in conspired to put paid to that.

I already have a couple of clips I’m going to incorporate into a small learning project, and will no doubt share some results in a future iPhone 12 Diary piece – but for now, you can find some sample footage in Smartta’s promo video.

The Smartta SliderMini 2 isn’t cheap. At $399 ($379 until January 10), it definitely falls into the ‘serious videographer’ category, rather than something a more casual shooter might buy.

But if you do have serious videographer ambitions, a slider is definitely a great tool to have. Watch any YouTube product video, and there’s almost a 100% chance it will include one or more slider shots: the ability to smoothly pan past a product is one you’ll value in every product video you’ll shoot.

More casual shooters can get similar results for less money. If you already have a gimbal for either iPhone or mirrorless camera, for example, then a skilled user can get smooth pans with that – especially when shooting at high frame-rates for slow-motion footage. Other budget options are a manual slider or low-cost dolly, either of which can be had for a fraction of the cost.

But if you have the budget and the need, the SliderMini 2 is a very nice piece of kit, and one I’m sure will see a fair amount of use.

The Smartta SliderMini 2 is available direct from the company’s website for $399 – or $379 between now and January 10. There are also some bundles available with ball heads and smartphone holders.