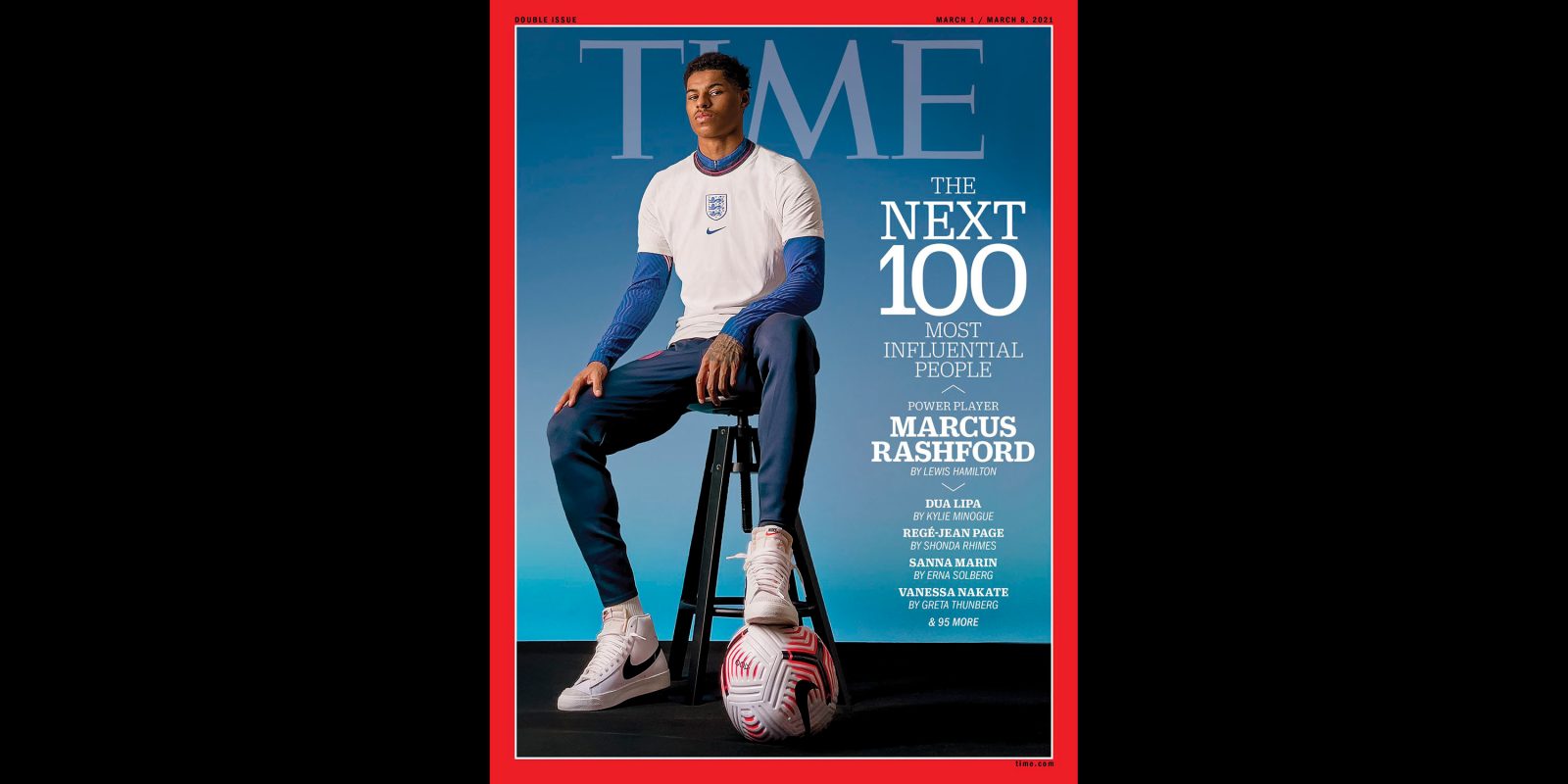 A Time magazine cover shot on iPhone features footballer Marcus Rashford as one of the 100 most influential people. Rashford is honored for his advocacy work on homelessness and child hunger.

In the UK, low-income families with children qualify for free school meals, ensuring that they have a hot lunch (and sometimes breakfast) at school at no cost. When the pandemic hit, many of these working families saw their income fall further as a result of being laid-off or having their hours reduced. This meant that they were left struggling to feed their families during school holidays and extended closures in the pandemic.

The government initially refused to help, but Rashford shamed it into doing so when he wrote an open letter to members of parliament, calling for support.

As many of you know, as lockdown hit and schools were temporarily closed, I partnered with food distribution charity FareShare to help cover some of the free school meal deficit. Whilst the campaign is currently distributing three million meals a week to those most vulnerable across the UK, I recognise it’s just not enough.

This is not about politics; this is about humanity. Looking at ourselves in the mirror and feeling like we did everything we could to protect those who can’t, for whatever reason or circumstance, protect themselves. Political affiliations aside, can we not all agree that no child should be going to bed hungry? […]

During this pandemic, people are existing on a knife’s edge: one missed bill is having a spiral effect, the anxiety and stress of knowing that poverty is the main driver of children ending up in care, a system that is designed to fail low-income families. Do you know how much courage it takes for a grown man to say “I can’t cope” or “I can’t support my family”? Men, women, caregivers, are calling out for our help and we aren’t listening.

Rashford said that he too would have been going hungry had this happened during his childhood, and that he was able to succeed thanks to a compassionate society.

The letter drew huge media coverage, and led to the government making a U-turn on the issue.

In 2020, Marcus Rashford took his many talents beyond the football field—where he is a star player for Manchester United and England’s national team—to respond to a national crisis: child hunger.

“I know what it feels like to be hungry,” he wrote last June as part of a campaign that succeeded in pushing the government to provide meals for students in need during summer vacation. By standing up for the most vulnerable in our society, and using his platform and influence to create positive change, Marcus inspired countless others to join him on this mission and cemented his status as a role model.

In a year that showed us the power of working together toward a common goal, he was a galvanizing force behind uniting people across the U.K. in the effort to ensure that no child goes hungry. His determination, resilience and persistence have been truly inspiring. I cannot wait to see how he continues this important work.

Rashford tweeted that he was proud to make the cover, and noted that the photo was shot on an iPhone in his lounge.

It’s not the first occasion we’ve seen a Time cover shot on iPhone: The first time I can recall was back in 2012, and in 2017 Time exclusively used iPhone photos for a Women Firsts series.