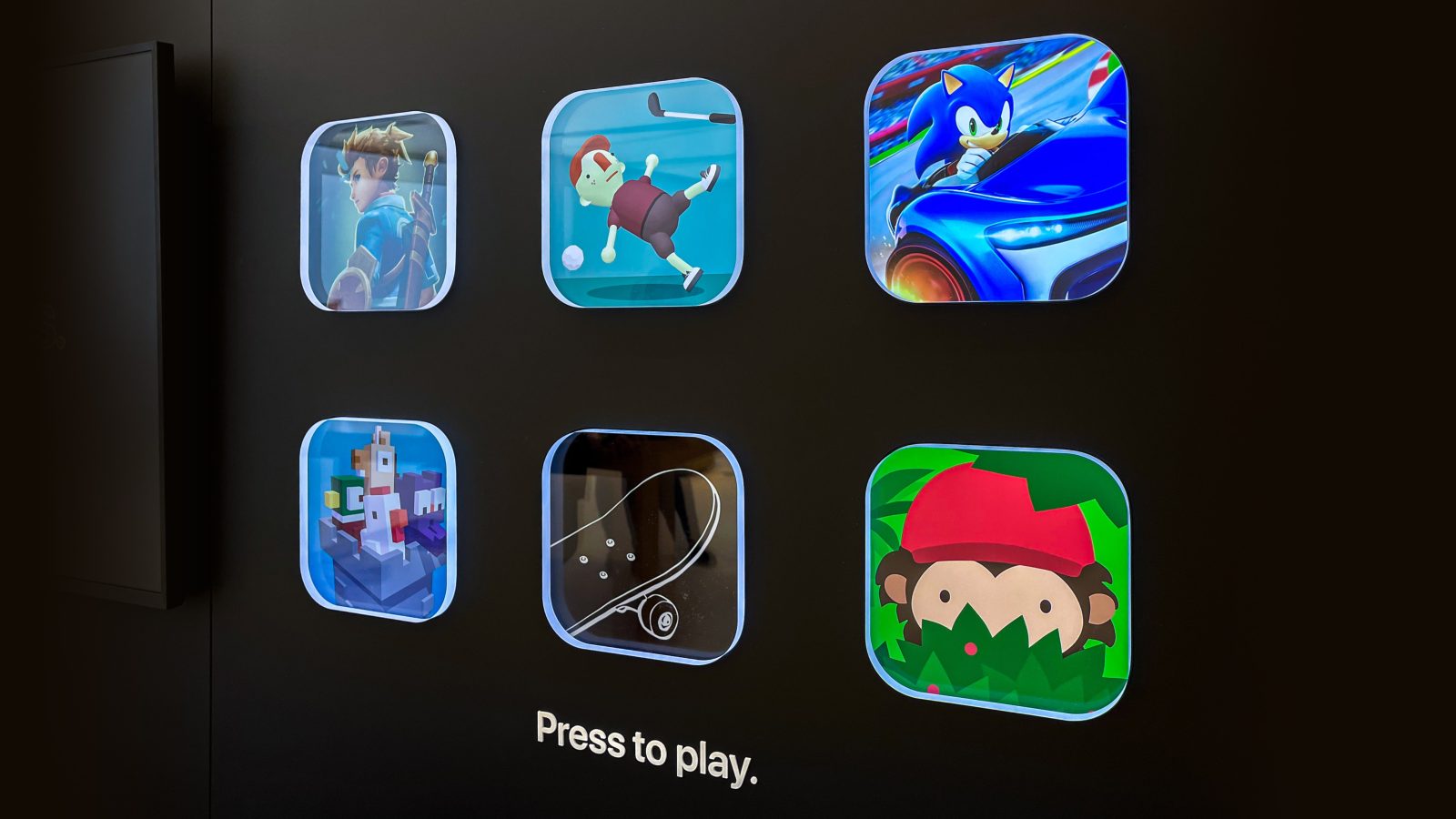 Over the past four months, Apple has been revamping its retail stores across the world with a series of interactive demos that spotlight Apple subscription services. Collectively, the new displays fundamentally change the customer relationship with the Apple Store and represent a significant evolution of Apple’s retail experience.

Step inside an Apple Store with the latest design, and the world of Apple services will unfold. Glowing signs for Apple Music, Apple Arcade, Apple TV+, and large text announcing Apple Fitness+ dot the Avenues around the store perimeter.

Reimagining physical Apple Stores to promote digital services began long before the first season of “Ted Lasso” dropped on TV+, but it wasn’t until the latest displays that a clear image of the future came into view.

Bold titles, rich libraries of content, and a single call to action define each Apple service bay. It’s not browsing Apple Music on a demo iPhone that’s new — it’s the messaging behind it. And that messaging is shifting the balance of power in stores from hardware to services.

Since the first Apple Stores opened in 2001, Apple hardware has been the gateway to software, services, and solutions. Step up to a Mac, and inside OS X, you’d discover how to edit a video or create a song. As iTunes grew and online content expanded, the iPod, iPhone, and iPad became gateways to discovering new music, movies, and TV shows.

Now in stores, Apple services are becoming the gateway through which customers discover Apple hardware like iPhone, iPad, Apple Watch, and AirPods.

At the Apple Arcade display, you first learn about the service, select a game from the Arcade library, scan a QR code with an iPhone, and then get hands on time. At the Apple Music display, the latest playlists and albums draw you in to try on AirPods Max. At the Apple Fitness+ display, workout types and high energy videos are front and center, underscored by the ecosystem of Apple hardware the service supports.

Each new display replaces merchandising previously dedicated to accessories and hardware like smart toys and iPhone-connected gear. Last fall, Apple emptied all its stores of third-party speakers and headphones. As shopping trends continue to move online, Apple’s shelves are better stocked by experiences than boxes that can be shipped to customers at home.

Apple services, too, can be experienced at home. The true value of in-store demos today is found with Apple’s retail teams. A Specialist can help you learn how to get the most out of your products or pick your mind on the plot of “Mythic Quest.” The displays are simply a conversation starter. As Tim Cook might say, it’s an advantage “only Apple” can offer.

One part of the store experience not yet fully realized in the services era is in-store events. This is, of course, due to the pandemic. In 2017, then-SVP of Apple Retail Angela Ahrendts alluded to the potential of Today at Apple in bringing services to life:

[The store] is the largest product that Apple produces. So if you think of it, the hardware is the architecture of the store. The software is what happens in the store, and how we basically turn on Apple Music and the App Store.

Just before the pandemic began, we saw the first true modern collaborations between Apple services and in-store programming. The Up Next Live concert series and a collection of Music Lab: Remix sessions highlighted Apple Music artists. An Apple TV+ iPad Poster Series brought exclusive conversations with illustrators working on Apple Originals to flagship stores across the world. There’s a great opportunity for events like these to return and grow in the future.

At its core, the founding concept of the Apple Store hasn’t changed. Apple still believes its stores serve to educate and enrich customer lives by helping them go further with their products. But how we interact with and experience the Apple Store is evolving. Customers understand what the iPhone and iPad can do. What value can Apple services provide? Let’s find out.

Thanks to Ron and Pad for providing photos of the Apple TV+ and Apple Music bays.