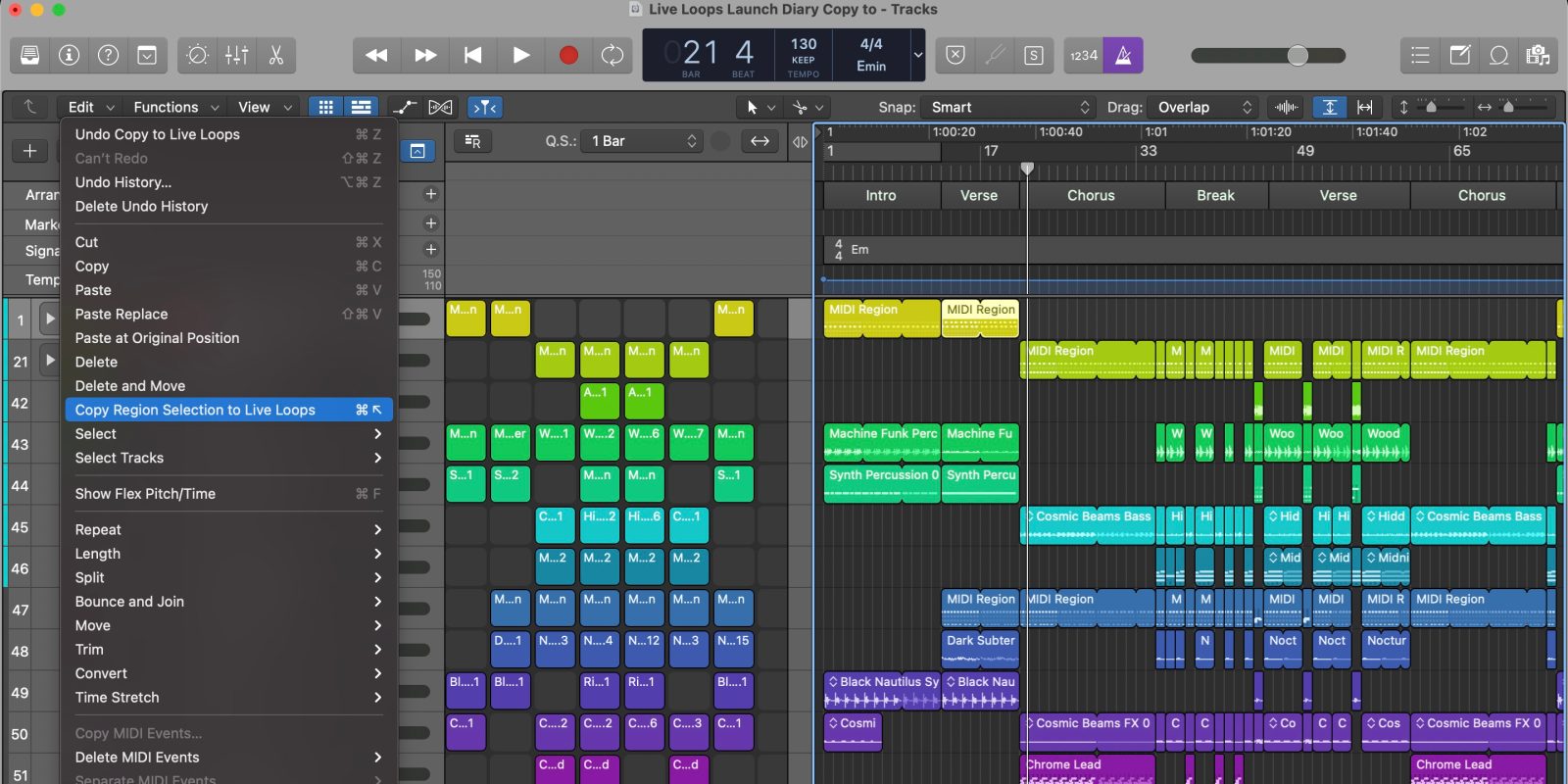 Today we are taking a look at the copy to Live Loops function and transforming your regions into cells. While we previously explored some of the more performance-based applications of Launchpads and Live Loops, arguably the most obvious use for Apple’s grid-based production environment is in arrangement. You can easily and quickly experiment with transitions from one part to any other without having to start dragging and dropping huge, unwieldy chunks of regions around. Sure, that’s nothing some Marquee tool or skip/cycle wizardry can’t handle on the regular timeline, but there’s really no comparing that to the musical immediacy and hands-on immersion of triggering these sections with a single Launchpad button, all-synced to the timeline and without having to commit to anything until you’ve experienced the change.

Transforming your audio into Live Loops

Both a refreshing new vertical perspective on your idea and particularly direct access to each of the moving parts therein, Live Loops can be a wonderful way to arrange and re-arrange your song and sound design ideas. While we are especially fascinated and focused on the more creative performance/composition aspect of Launchpads in Logic Pro, copying regions from the old solo timeline into Live Loops is a powerful feature to wield. Not much more than a single click can immediately transform your existing timeline-based collection of regions into vertically-sliced cells and scenes in the Live Loops environment, effectively providing hands-on Launchpad access to each element of your project with one command. Not only a particularly quick way to simply test run Live Loops for long-time timeline die-hards, Logic Pro’s Copy to Live Loops function might be one of the best music/audio arrangement resources available to Mac users — synced one-shot, multi-track auditioning and recording of the parts of your song in one-click.

Copy to Live Loops – copying regions to cells and scenes

Under the Edit menu in Logic Pro you’ll find the contextual Copy to Live Loops function. This powerful command will pull regions of all kinds from the timeline and organize them neatly into Cells and Scenes, ready for your Launchpad controller. You can copy essentially any mixed-and-matched collection of regions to a Scene with a marquee selection, a set Cycle range, via existing custom project Markers, or just the entire song — verses, choruses, and the rest of it — directly from the timeline’s Arrangement markers.

So let’s take a look at some of the ways we have been doing this, and let us know in the comments below if you have better ways of making it happen.

The general idea here is basically this: you choose what you want to put in Live Loops, either drag it in there or hit a key command, and you’re done.

You can drag and drop regions over to the matching tracks in the Live Loops environment.

Or select/determine what you want to copy over (marquee selection, region selection, cycle range, or Markers/Arrangement markers). And then hit the Copy to Live Loops key command (Command + Fn + Left Arrow), or access this contextual command via the Edit menu at the top left of the Live Loops grid (Edit > Copy to Live Loops).

Move an entire song to cells in one-click

That means if you have a Logic Pro project that uses the handy built-in Arrangement markers (in the Global tracks area at the top of the timeline), you just hit the Copy to Live Loops key command above and your whole project gets dumped into vertical Live Loops slices. That is providing the Cycle range on the timeline is off and there are no regions selected, which would override the contextual command and copy those selections over instead.

As Logic Pro will be placing copies of your regions into Live Loops Cells, regardless of your method of choice, all of your precious original work essentially remains untouched — further magnifying the practicality and versatility of the feature. If it’s going to be this easy and without irreparable repercussion to the orignal creation, you might as well hit one key command to get what could be a drastically new perspective on your ideas.

There’s no denying that some folks likely see the Live Loops workflow and the colorful Launchpads as being something for those wild Ableton kids and their loud electronic bass music, and it very much is. But it’s also far more versatile than that and can be a wonderful tool for folks particularly interested in traditional live recording work as well. While I personally fall into both categories, a number of my more traditional songwriting collaborators have thus far really enjoyed taking this new immediate, vertical bird’s eye-view of our songs and audio work as a convenient way to audition new arrangements and alternate parts.

Having any interesting techniques for moving traditionally-recorded projects over to Live Loops? Let us know in the comments.

Be sure to browse through the rest of our ongoing Live Loops Launchpad diary entries below. Then swing over to 9to5Toys where you’ll find some rare price drops on Novation’s Launchpad lineup and our latest Logic Pros Marketplace post for some FREE sounds/plug-ins.