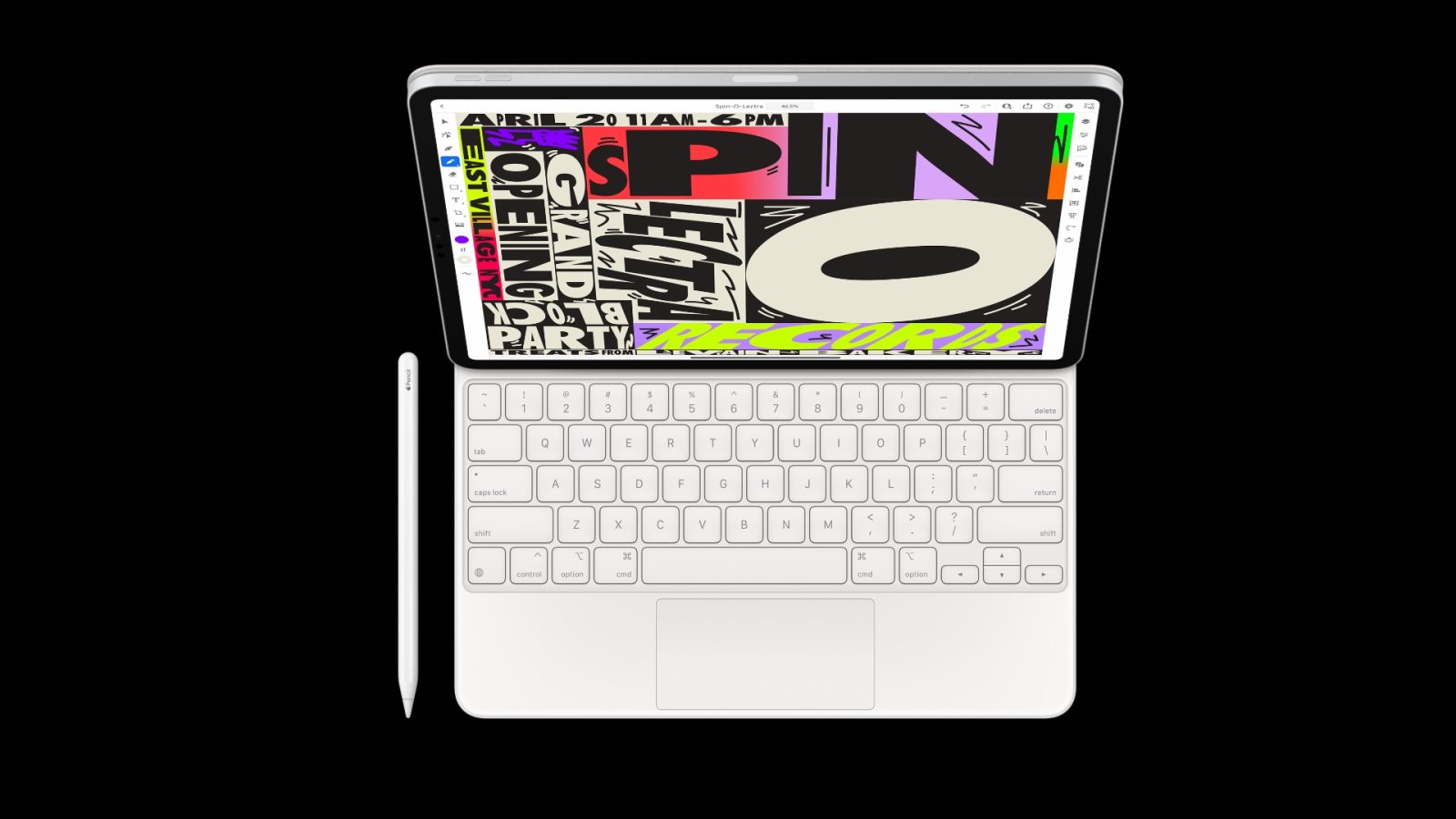 Following reviews of the new iMac being published yesterday, the first reviews of Apple’s newest M1 iPad Pro are here. In the reviews, we get a closer look at how the M1 chip takes advantage of iPadOS, the new mini-LED display in the 12.9-inch iPad Pro, and more. Head below for all the details.

So while, technically speaking, the Liquid Retina XDR’s black color reproduction isn’t “true black”, it gets dramatically close to that goal. I would even say that, because you typically hold an iPad further away from your eyes, ultimately this difference doesn’t matter: to my eyes, it feels like the Liquid Retina XDR supports true black, which has an incredible effect on using apps with true-black dark modes on the new iPad Pro. Contrast between black UI elements and white text is higher than before, and there’s also better separation between black sidebars and other dark gray or dark blue UI elements such as lists and popovers. I never used dark mode extensively on iPad because I preferred the way it looked on the iPhone’s OLED display; I’m going to reconsider now thanks to the Liquid Retina XDR’s fantastic black levels.

Comparing black levels between the old iPad Pro and the new one makes the 2020 model look blissfully ignorant of what the color ‘black’ actually is or what it’s supposed to look like. Check out the photo below, which shows the same black image displayed on a 2020 iPad Pro and the 2021 model at max brightness in a dark room with Night Mode disabled…

MacStories on the white Magic Keyboard:

I find the white Magic Keyboard more elegant and Apple-like than last year’s boring gray cover with black keys. The “Jony Ive look” of this version is lovely, but we’ll have to see how it ages over time. One week wasn’t enough to judge that aspect and, obviously, I’ve been treating this review unit well. It didn’t seem appropriate to throw the Magic Keyboard in a pile of dirt and claim that “I did it for science”.

Viticci, however, concludes his review by saying that the focus should be on the future of iPadOS, and how Apple can enhance the operating system to take advantage of the new M1 chip:

Aside from superior picture quality and color reproduction, at this stage the new iPad Pro hasn’t meaningfully improved anything in my daily workflow. It feels like there’s a missing second half to this product’s story. I’m optimistic though: I suspect Apple is well aware of this too, and I’d be extremely surprised if iPadOS goes without any major, foundational updates for another year. The new iPad Pro feels ready to power the next few generations of iPadOS; compared to such advanced hardware, however, the current version of iPadOS seems like it was made for three iPads ago.

The Verge says the new Center Stage camera feature is better than competing features on devices like the Facebook Portal:

One new invention I love is the Center Stage feature. It zooms and follows human faces to keep them centered in the frame of the iPad’s wide-angle front facing camera. It works in any video conferencing app without the need for setup and it performs very well, better than similar features on smart displays like the Echo Show or Facebook Portal.

The Verge also says that it’s easy to miss the benefits of the mini-LED display:

The funny thing about the 12.9-inch iPad is that it is very easy to miss the benefits of Mini LED in normal day-to-day use. At first you don’t see it.

Sure, there’s great contrast when you’re browsing the web, texting, playing games, and so on, but really it’s not very different from any other iPad. Apple still limits the max brightness in most scenarios to 600 nits, which is bright enough but not eye-popping (the iPad and iPad Air max out at 500 nits).

The magic kicks in when you are viewing videos or photos in full-screen. When you do that, the iPad Pro kicks into a different HDR mode (or in Apple’s parlance, XDR, for “Extreme Dynamic Range”) that really is stunning. The overall max brightness of the screen jumps up to a powerful 1,000 nits and peak brightness for certain lighting can hit 1,600 nits.

You don’t see it until you see it — but then you see it.

I was curious about the new iPad Pro’s battery life, given that miniLEDs are efficient and the M1 had been a boon for battery life on the MacBook Air and MacBook Pro.

But this year’s 12.9-inch iPad Pro lasted just 9 hours and 2 minutes, a full hour less than last year’s iPad Pro, on our video rundown test over wifi—and that’s not taking into account the notorious battery drain that is 5G.

Engadget has some details on the M1 chip’s performance, noting that the leap is not as huge as you might expect. Other reviews had similar results.

To try and get a sense of the iPad Pro’s creative chops, I stitched together multiple 4K video clips from old reviews when I had hair in LumaFusion and exported it. The 2020 iPad Pro finished in 14 minutes and 20 seconds. Meanwhile, the new M1 in the 2021 iPad Pro completed the test in… 14 minutes and 12 seconds. Not exactly a huge leap. Then, I tried a similar test in Adobe’s Premiere Rush, but with a twist: Instead of outputting the footage in its native 4K, I exported to 1080p at 30fps. The difference was a little more noticeable this time, but still not dramatic. It took just over six minutes for last year’s iPad Pro, while the new one pulled it off in 5 minutes and 37 seconds. (For what it’s worth, Apple said “the previous iPad Pro was already optimized to encode and decode video in real-time” and that the same is true of the video engine in the M1.)

ZDNet on the added RAM:

I’m coming from a 2018 iPad Pro with 4GB of memory, but I spent a lot of time testing the 2020 iPad Pro with 6GB of memory. On iPadOS, the lack of memory is most noticeable when multitasking and an app reloads its interface when you return to it, or when a Safari tab has to refresh itself after it sat idle for a while. Both of these issues occurred on a routine basis on previous iPad Pros I’ve used — by routine, I mean, all day long.

On the 2021 iPad Pro, I’ve yet to max out the memory when moving between several apps and Safari tabs. Apps remain ready for action in the background longer, and Safari remembers every detail of the web page.

As has kind of become a trend with iPad Pro reviews over the years, the consensus among reviewers is that the new M1 iPad Pro is an incredible iPad that is once again held back by iPadOS limitations. Now that the new iPad Pro is in the wild, however, attention can shift to WWDC, which kicks off on June 7. Early rumors are that Apple has a lot in store for iPadOS 15 this year.

Viewed entirely as a piece of computer hardware, the 2021 iPad Pro is a straight-A product. It’s the best iPad ever made—by a wide margin. It’s just as powerful as the M1 Macs that Apple has been selling since last fall, but offers all the versatility (touch input, pencil input, and optional keyboard/pointer support) that makes the iPad so great.

And yet it all feels incomplete. Processor power, fast storage, copious RAM, and fast networking are all great specs—but they’re valueless unless they can be put to use. I love the iPad, but Apple’s hardware continues to move at a pace that its software can’t keep up with. The iPad Pro is ready. So now what?