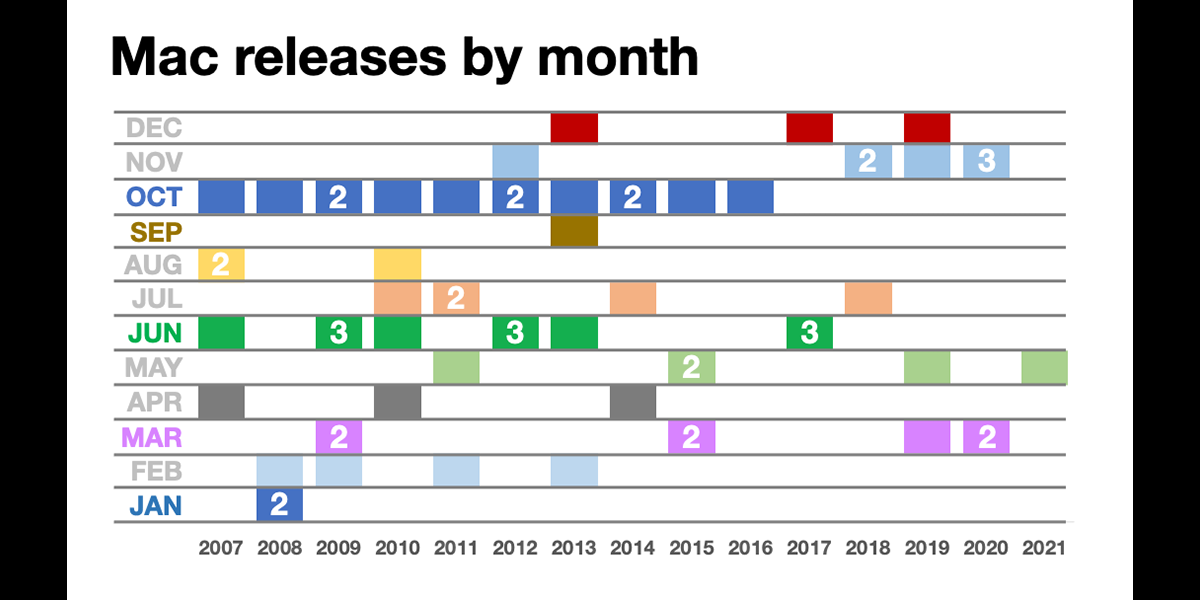 The discovery of keyword tags in Apple’s official YouTube video did provide evidence that at least someone at Apple thought the expected 14-inch and 16-inch MacBook Pro models were set to be announced, but it’s entirely possible they just read the same rumors everyone else did when setting the tags.

ZDNet thought that perhaps historical trends in Mac launches might help predict when we might get our hands on the new models.

There are a few trends worth noting. From 2007 through 2016, there were always new Macs released in October. That trend seems to have fallen away in the last few years, but there have been releases in November and December. However, one constant seems to have stayed stable all the way from 2007 through 2020: New Macs become available in the last three months of the year.

[And so we predict] it’s unlikely you’ll get anything new before November.

All of which is very interesting and, of course, completely meaningless.

With the switch to Apple Silicon, Apple is embarking on a completely new era of Macs. No historical trend is going to reveal when the company launches the next machines to make the switch, especially as Apple has already told us that the global chip shortage is interfering with its plans. In short, the new machines will be available when they are available.

Bloomberg’s prediction of “as soon as early this summer” is as vague as could be. “As early as” has no expiry date; “early” is a subjective term; and even “summer” has no agreed definition. Meteorologists define it as June 1 to August 31, while astronomers say summer begins on the solstice, which is June 21.

The only consistent reports about an M1X MacBook Pro launch have been “second half of 2021” – and that prediction, at least, seems safe.