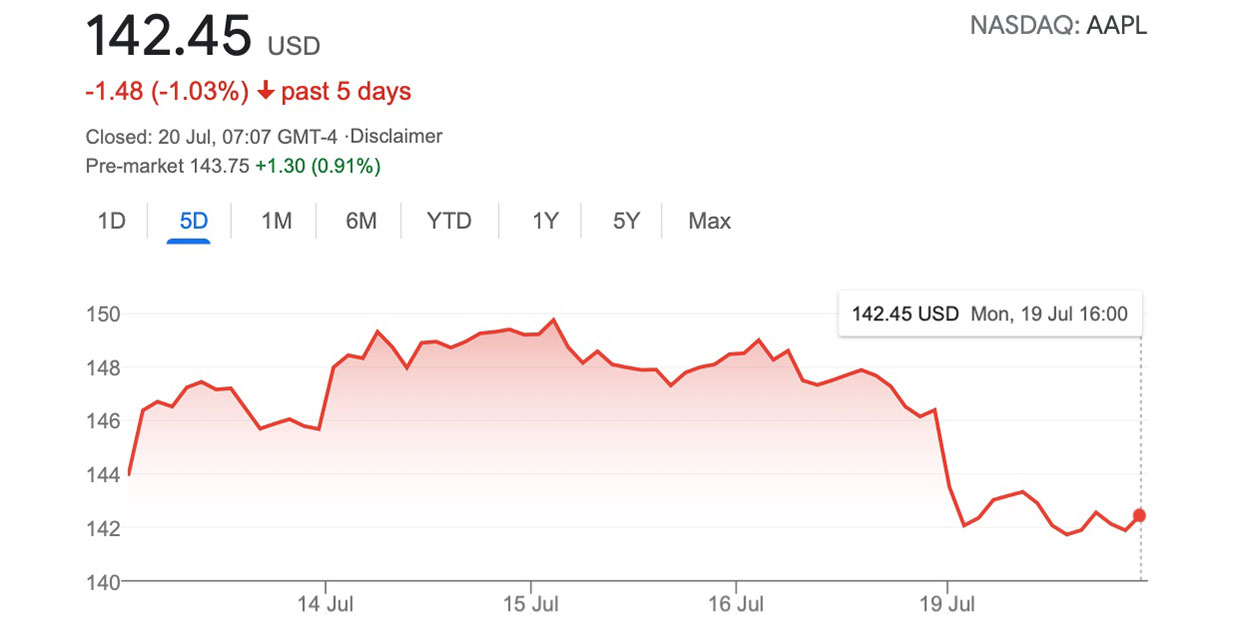 It’s less than a week since a succession of record highs saw Apple stock close in at $150, but investors have seen AAPL slide to $142.45 in the past few days.

AAPL hit $149.76 on July 15 before starting a decline that accelerated yesterday …

AAPL has enjoyed a succession of 30 record highs between April and July this year, with three of them in a single week.

However, the Delta variant of COVID-19 has raised fresh concerns about the economy, setting off a global slide in share prices, reports the Financial Times.

The threat of the Delta coronavirus variant hit global equity markets on Monday, handing European bourses their worst session of the year and sending US stocks down 1.6 per cent […]

Europe’s region-wide Stoxx Europe 600 lost 2.3 per cent in its biggest one day price fall of 2021, with London’s FTSE 100 dropping by the same amount.

On the other side of the Atlantic, the S&P 500 index lost more than 2 per cent before moderating in afternoon trading to close 1.6 per cent lower. The technology-focused Nasdaq Composite fell 1.1 per cent. In commodities, Brent crude, the international oil benchmark, declined 7.1 per cent to $68.38 a barrel.

It was this variant that led Apple to postpone its planned return to the office, by at least a month.

FXStreet reports that AAPL tracked the fall in the Nasdaq.

Having opened with a sharp bearish gap on Monday, Apple (AAPL) lost 2.70% on the day and settled at $142.45, tracking the 152 points sell-off in Nasdaq Composite amid escalating concerns that the Delta covid strain could threaten the global recovery.

Reports that spyware from Israel-based surveillance software company NSO Group is capable of breaching even the latest generation of iPhones through zero-click attacks, weighed heavily on the iPhone maker.

As is frequently the case with the stock market, sentiment appears to playing a bigger role than logic. Apple fared extremely well during pandemic lockdowns, with record demand for hardware for work and studying from home, so any renewed lockdown would likely not spell bad news for the company.

It does, however, mean that hitting that $150 valuation may now be some ways off.

Apple stock remains in a strong bullish uptrend, but the short-term end goal looks a bit more questionable now that the broader market has turned around. We are now behind the most bullish time of the year, the first two months of July, and heading into results season with some high valuations. Can they be sustained? The investment banks certainly produced strong results, and soon it will be the turn of the tech titans. However, strong results do not necessarily mean strong stock prices. In Q2 Apple results came in over 40% ahead of Wall Street analyst expectations, but the stock fell in the days and weeks after results.