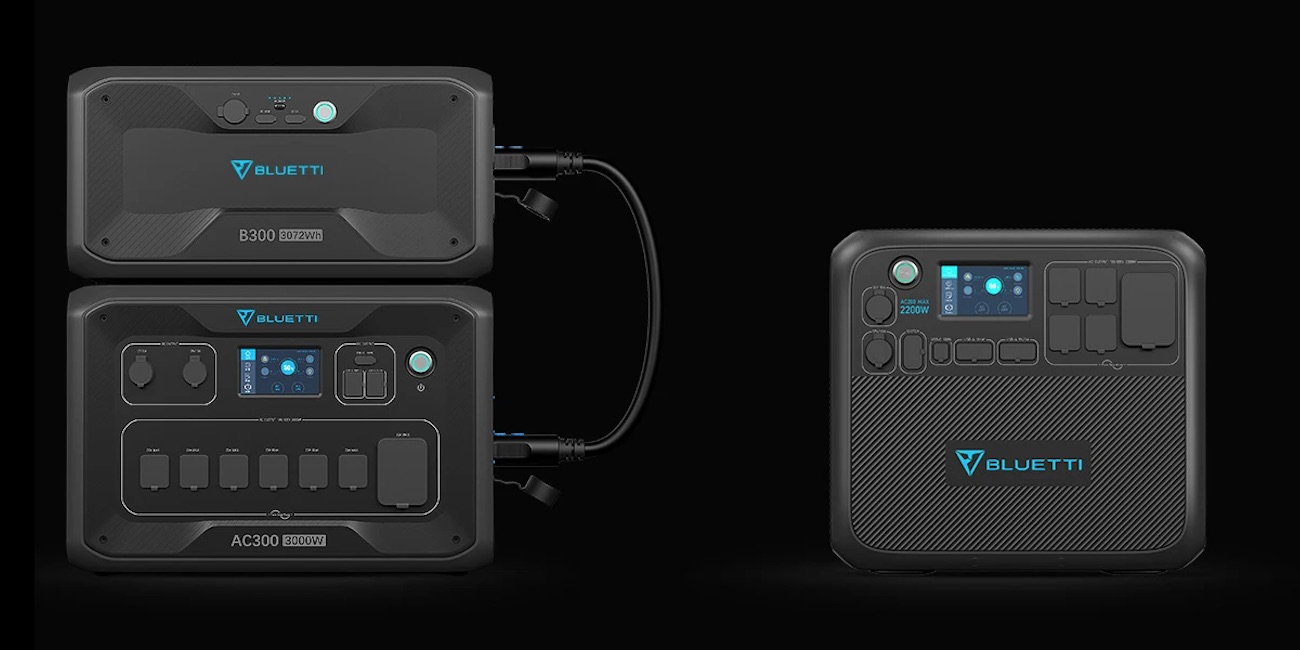 BLUETTI is set to launch the latest additions to its portable power solution line up with the new 6000W AC300 and AC200 MAX power stations. Expanding upon a wildly successful, multi-million dollar crowdfunding campaign over the past year, BLUETTI is now ready to unleash its flagship AC300 portable power station alongside the upgraded and enhanced AC200 model, as well a pair of new modular battery units to power them. Hit the jump for a closer look and more details.

The new BLUETTI AC300 and AC200 MAX power stations run on a modular system so users can flip out the battery units as needed — the actual power stations are sold with the compatible battery packs and expanded separately from there. The aforementioned power stations are also being joined by the BLUETTI B230 and BLUETTI B300 battery units, which the brand says allow users to replace the batteries if needed in the future, to expand the power station’s capabilities at some point, and even allow the units to be lighter to carry:

This new modular design is a bold move for BLUETTI, but for a heavy-duty unit like BLUETTI AC300, this design not only significantly reduces the weight of each single unit but also allows users to replace any or all batteries, if necessary, in the future. And since the system is modular, you can carry each module individually.

All of which is supported by a 3,000W pure sine wave inverter that works alongside the MPPT controller to support what BLUETTI refers to as a “staggering 2,400W of solar charging.” The flagship model can, however, also optionally carry up to four of the modular battery packs, which yields a total of 12.3kWh of capacity.

As if that’s wasn’t already enough, using BLUETTI’s Fusion Box Pro  to connect two AC300units together can be used as “an emergency power center and run your home essentials for over a week, or with enough solar panels, you can even run your entire whole house, off-grid… indefinitely.” That setup houses “up to 6,000W of continuous power, 24.6kWh capacity in total, and 10.4kW of groundbreaking solar input capability.”

BLUETTI has also been iterating and improving on its already quite successful AC200 model (it raised over 6.7M in crowdfunding) with the AC200 MAX. The new modular model supports two additional battery packs including the BLUETTI B230 or B300, the latter of which can expand the new AC200 Max with 8192Wh of capacity via the unit’s continuous output power at 2,200W via the pure sine wave inverter.

Other enhancements made here include up to 900W of solar input, 100W PD3.0 USB-C port, as well as a built-in 30A NEMA TT-30 outlet for the “RV crowds.” Smartphone control using the companion BLUETTI app over Bluetooth is a nice touch as well.