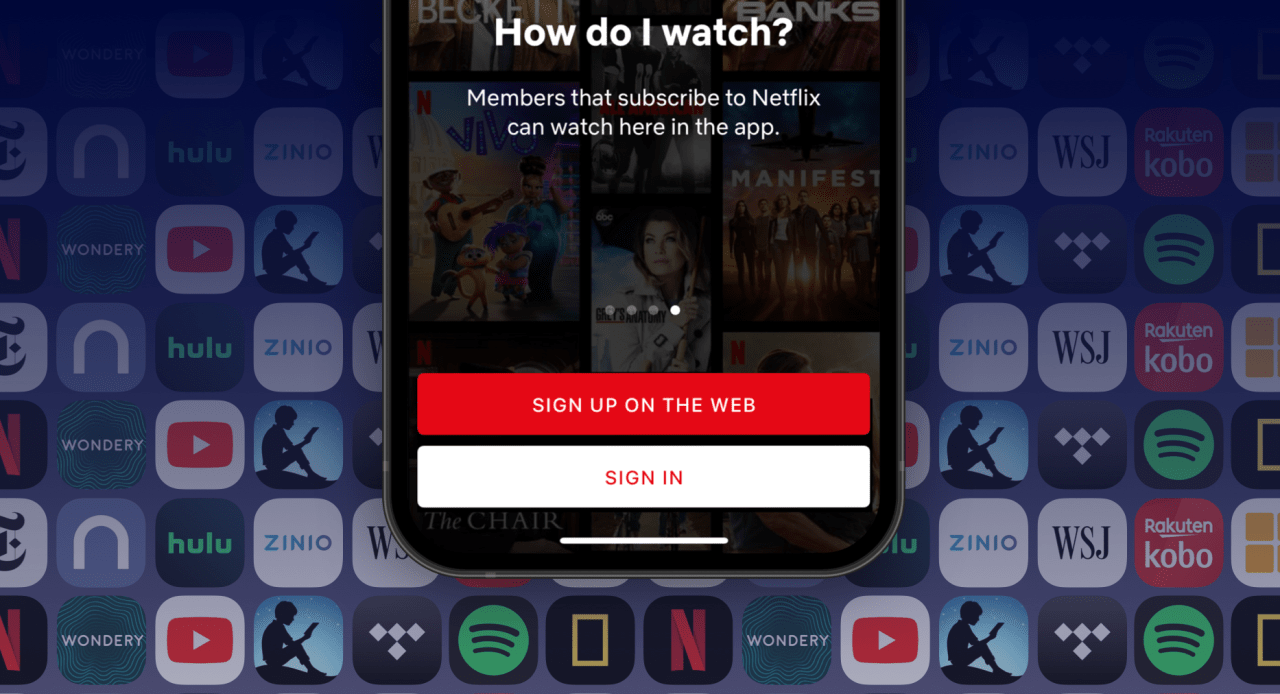 Late last night, Apple announced that it’s finally going to let developers redirect users off their apps to sign up for services outside of the App Store. It’s a major shift for “reader” apps that has been long requested by companies like Spotify and Netflix. Reader apps include things like music services, video streaming, digital magazines, newspaper subscriptions, eBook readers, even podcast players. Starting next year, some of your favorite apps will have new ways to manage your account and subscriptions as a result of this new policy.

At the moment, if you download an app like Spotify, you cannot sign up for the service within the app. This is in part due to Spotify’s resistance to Apple’s revenue split for in-app purchases and App Store subscriptions. Currently, when you launch Spotify on the iPhone, you are presented with several sign-in options for existing subscribers. But the “sign up free” button asks you for your email address and sends you information on how to sign up for Spotify on the web.

Now, with these changes to the App Store, Spotify can show a web view directly in the app when tapping the sign-up button. This removes a giant barrier to entry for services that compete directly with Apple. Other apps like Netflix suffer from the same problem. Upon launch, you only see a “sign in” button. There’s no discernible way to sign up. At the moment, Apple doesn’t allow developers to even tell users that they can sign up for a service on the web in their apps. Once these new changes take effect, Netflix can show a button for signing up.

We can imagine an app like Disney+ showing both the existing “sign up” button that uses Apple’s payment system as well as a “use disneyplus.com” link for signing up directly with Disney. An app like Spotify can direct users straight to the web using its “sign up” link or keep its existing setup and add a button for using “Spotify.com.” It will be interesting to see how developers incorporate these changes into their apps. This is uncharted territory for Apple and it’s highly likely there will be issues around different types of implementations.

Some apps won’t be eligible for a web link. Take something like a podcast player versus a podcast subscription service. An app like Luminary that offers a subscription for original content could take advantage of Apple’s new policy and offer sign up and account management through a web view in their app. But an app like Overcast or Castro couldn’t. That’s because they’re simply “player” apps that surface content for free from the web. Their subscriptions don’t offer access to content, they add premium features.

While some developers may see this as a marginal update to Apple’s policy, it’s actually quite big. It’s going to aid Apple in its effort to fend off antitrust watchdogs. The new policy certainly isn’t perfect, but most of Apple’s core services competitors fall under “reader” apps and therefore will benefit from the change. What do you think about Apple’s new policy? Let us know in the comments below!