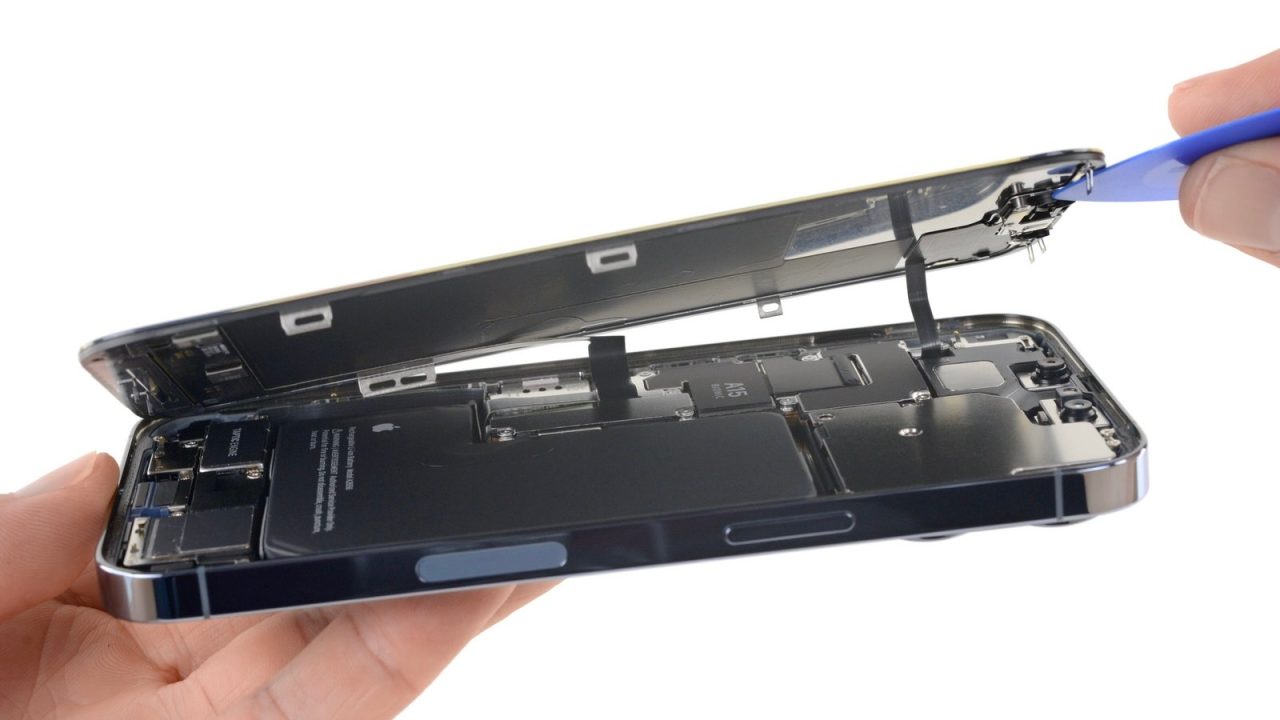 After live streaming the teardown process on Friday, the folks at iFixit have now shared additional details from their in-depth teardown of the iPhone 13 Pro. In total, iFixit gives the iPhone 13 Pro a repairability score of 5/10, which is down from the 6/10 it awarded the iPhone 12 Pro last year.

One of the notable internal changes this year is a new Face ID array that combines the flood illuminator and dot protector into a single module. This, along with moving the earpiece speaker to the top bezel, is what allowed Apple to reduce the size of the notch in the iPhone 13.

iFixit explains that the dot projector in the front-facing camera has “moved from the edge to the center of the module this year.” The flood illuminator was previously housed in the display, but has now been integrated into this new module. iFixit also confirms that any display replacement will break Face ID from working, which we first reported over the weekend.

Face ID works even when we disconnected the front sensor assembly. However, any display replacement knocks out Face ID.We tried transferring the sensors from the old display and porting over the Face ID hardware, but no dice. It looks like the display is serial-locked to the phone.

The teardown also speculates that Apple is using a new touch-integrated OLED panel this year in the iPhone 13 Pro:

Thanks to some expert knowledge from our new friends at Instrumental, we think the iPhones 13 are using “touch-integrated OLED panels,” which, like their name suggests, combine the touch and OLED layers of a display — reducing cost, materials, thickness, and the number of cables you can accidentally tear. Neat!

Furthermore, Apple’s decision to move the the earpiece speaker to the top bezel means that one screw is now under the logic board. Here’s what that means:

Up top we find the relocated earpiece speaker, complete with a cute little snoot. That snoot lives between the front-facing camera and Face ID hardware, and connects to a channel that directs sound out the top of the display.

While we love simple spring contacts, one of this speaker’s standoff screws is trapped under the logic board, meaning you’ll have to remove the board to swap the speaker! These layers are quite the repair ogre.

In total, iFixit gives the iPhone 13 a repairability score of 5 out of 10. Noting that while “display and battery replacements remain a priority” in the internal design, there are two key red marks against the iPhone 13’s repairability:

You can find the full teardown over at iFixit.