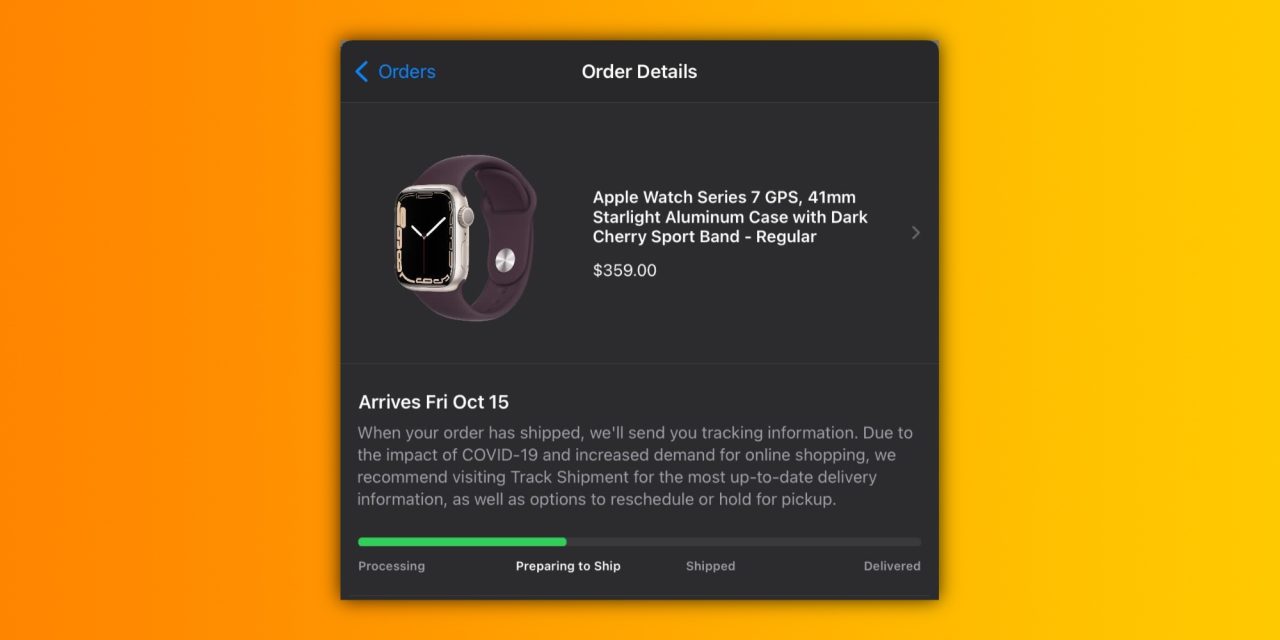 While the Apple Watch Series 7 launch date was a mystery during the “California Streaming” keynote, Apple is not wasting anymore time. After pre-orders started on Friday, some customers have already received the notification that the product is preparing to ship.

Apple usually does that when launching new products, so it doesn’t mean shipping will start as soon as by the beginning of next week. As a matter of fact, maybe a few lucky customers might receive the new Watches by Wednesday or Thursday, although the majority who were able to pre-order the Apple Watch Series 7 yesterday, will receive it on Friday, 15.

A few 9to5Mac staffers already received the “preparing to ship” message. As you can see in the image above, the Apple Watch Series 7 with 41mm, Starlight Aluminum case, and Dark Cherry Sport band is set to arrive next Friday.

On social media, few people posted about their Apple Watch Series 7 preparing to ship. As of now, many model choices have already their delivery date slipped to November, as a previous reporting suggested that it would be limited in supply during pre-orders.

The Apple Watch Series 7 brings the first redesign to the Watch since Series 4 when it introduced a bigger screen. Now, with almost no bezels, the new Apple Watch has options of 41mm and 45mm displays. Although it features the same S6 chip as last year and also the same sensors, it does have a brighter Always-On Display and is able to charge faster than previous models.

The new Watch is available in aluminum, stainless steel, and titanium as well as with GPS or GPS + Cellular connectivity. Here are the models:

If you want to learn more about it, don’t forget to read our tidbits post about the Watch here, as well as a comparison article between the Series 7 and Series 6 here.