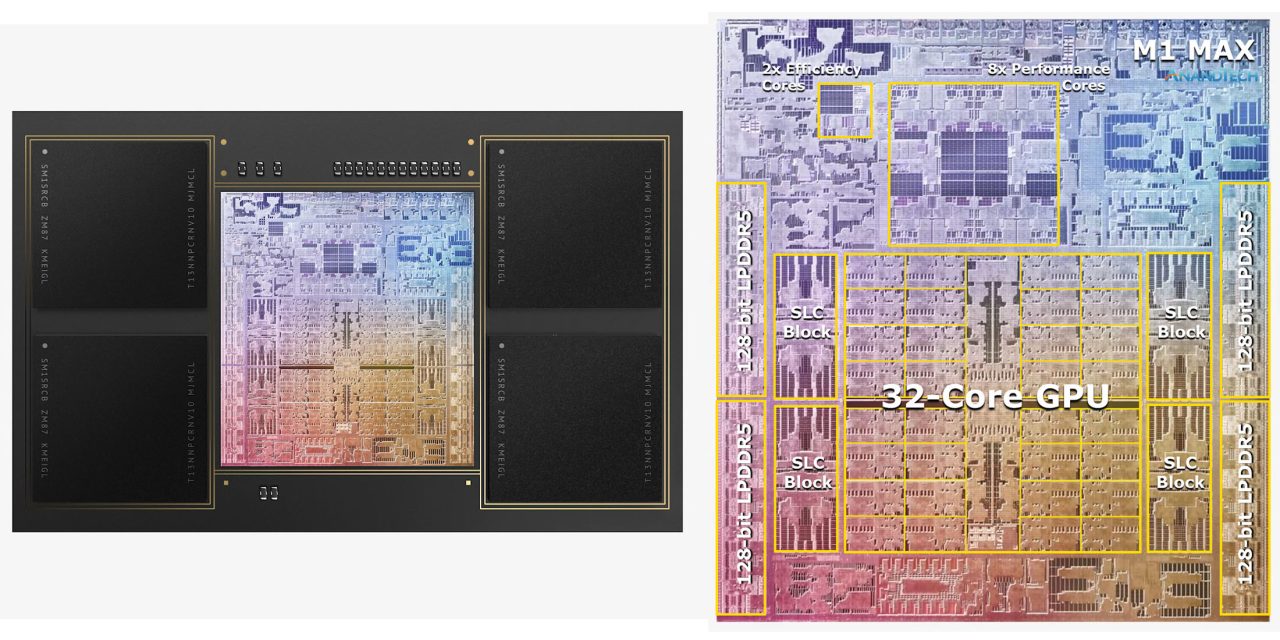 An M1 Pro and M1 Max deep dive shows that the new chips don’t just allow the new MacBook Pro models to outclass Windows laptops, but also compete against the best desktop PCs – something that wasn’t even considered possible for a mobile chip!

Making this all the more remarkable is the fact that the actual CPU cores appear to be the same ones found in the base-level M1 chip; it’s just that everything else is better.

AnandTech confirmed its suspicion that the cores are the same ones found in the base M1 chip.

We had indicated in our initial coverage that it appears that Apple’s new M1 Pro and Max chips is using a similar, if not the same generation CPU IP as on the M1, rather than updating things to the newer generation cores that are being used in the A15. We seemingly can confirm this, as we’re seeing no apparent changes in the cores compared to what we’ve discovered on the M1 chips.

However, that doesn’t mean the only difference is in the number of them. First, Apple pushes the cores harder.

The CPU cores clock up to 3228MHz peak, however vary in frequency depending on how many cores are active within a cluster, clocking down to 3132 at 2, and 3036 MHz at 3 and 4 cores active. I say “per cluster”, because the 8 performance cores in the M1 Pro and M1 Max are indeed consisting of two 4-core clusters, both with their own 12MB L2 caches, and each being able to clock their CPUs independently from each other, so it’s actually possible to have four active cores in one cluster at 3036MHz and one active core in the other cluster running at 3.23GHz.

One large feature of both chips is their much-increased memory bandwidth and interfaces – the M1 Pro features 256-bit LPDDR5 memory at 6400MT/s speeds, corresponding to 204GB/s bandwidth. This is significantly higher than the M1 at 68GB/s, and also generally higher than competitor laptop platforms which still rely on 128-bit interfaces.

But the biggest differences are in the graphics capabilities, which is where we also see the greatest difference between the M1 Pro and M1 Max. The M1 Pro models offer twice the performance of the M1, while the M1 Max quadruples the M1 figures.

The GPU and memory interfaces of the chip are by far the most differentiated aspects of the [Pro versus Max]. On the M1 Max which we tested for today, the GPU is running at up to 1296MHz […]

Apple also doubles up on the memory interfaces, using a whopping 512-bit wide LPDDR5 memory subsystem – unheard of in an SoC and even rare amongst historical discrete GPU designs. This gives the chip a massive 408GB/s of bandwidth.

It also has what appears to be a doubled-up media encoding engine. The overall result, says the site’s Andrei Frumusanu, is something truly incredible.

The M1 Pro & Max achieve performance figures that simply weren’t even considered possible in a laptop chip. The chips here aren’t only able to outclass any competitor laptop design, but also competes against the best desktop systems out there, you’d have to bring out server-class hardware to get ahead of the M1 Max – it’s just generally absurd […]

The combination of raw performance, unique acceleration, as well as sheer power efficiency, is something that you just cannot find in any other platform right now, likely making the new MacBook Pro’s not just the best laptops, but outright the very best devices for the task.

Check out the full write-up, alongside the other MacBook Pro reviews that went live today.