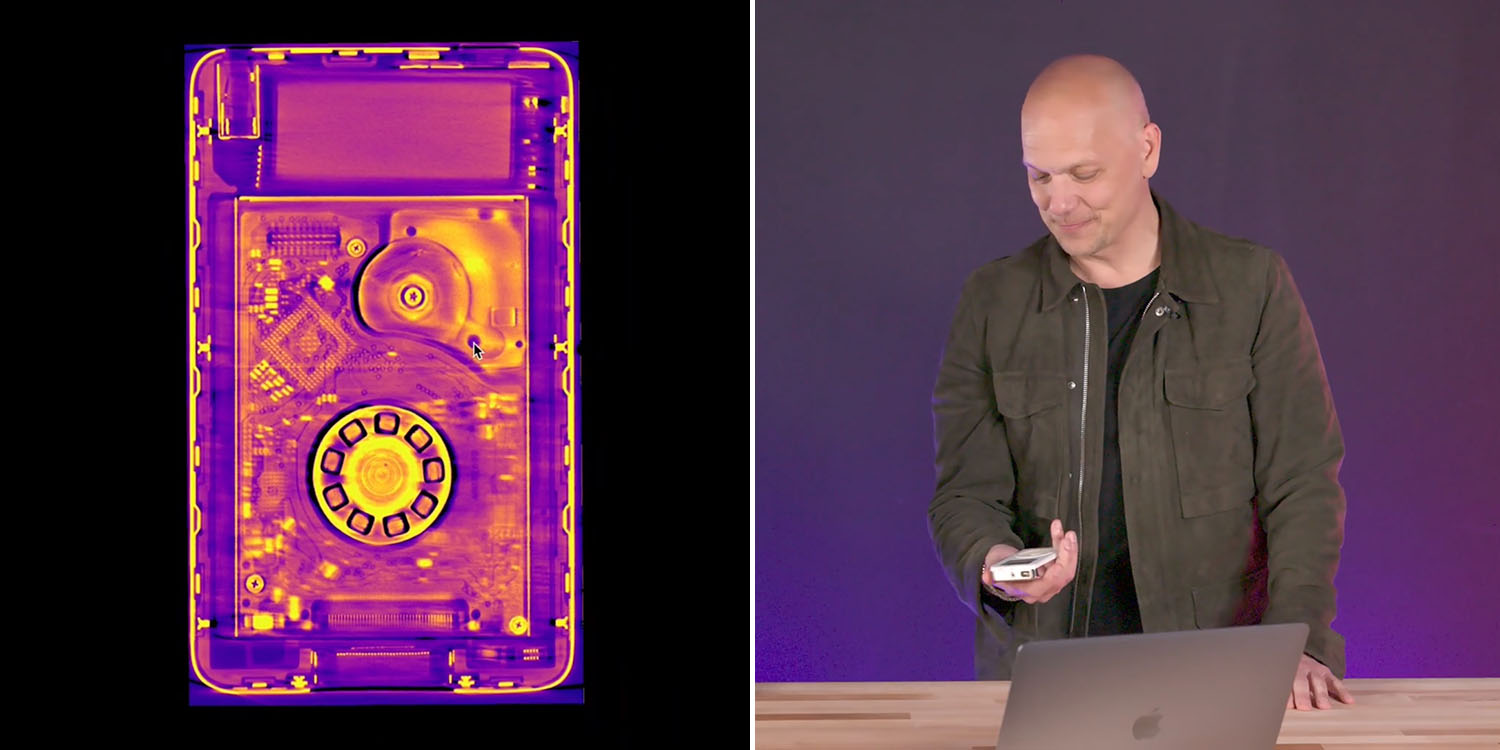 Fadell talks about a number of the design considerations. For example, the team was extremely nervous about the reliability of the hard drive as consumers – unused to the delicacy of such devices in such a portable product – might treat the iPod rather more casually than they would a laptop …

For this reason, design of the ‘bumpers’ designed to protect the drive from the shock of being dropped casually onto a table was a key consideration.

Similarly with the control wheel. For the original model, they needed the bearings to allow free rotation without ‘rocking’ from side to side. When they switched to a clickwheel, then the team actively wanted that rocking movement.

Fadell chats with Lumafield, a company which rents out CT scanners to companies and researchers who don’t have the need or budget to buy the expensive machines, but need one for a limited time. The company also offers software which allows scans to be be remotely (or later) explored without access to the computed tomography machine itself.

Lumafield’s X-ray computed tomography platform gives you a deep view inside objects to see features that have never been visible until now.

Lumafield’s Neptune CT scanner is designed to be part of your team’s essential engineering toolkit. It’s at home in an office or workshop and offers an easy-to-use, AI-driven interface that lets anyone run scans.

Lumafield takes the friction out of inspection with Neptune, a groundbreaking easy-to-use CT scanner paired with Voyager, powerful cloud-based software that solves problems from initial design through mass manufacturing.

Lumafield’s Voyager analysis software turns scans into quantifiable, actionable insights. Visualize, analyze, and share your data in real time with nothing but a web browser.

As a promotional exercise, the company offers a ‘scan of the month’ microsite in which they share scans of everything from gadgets to lego figures.

Lumafield is also a company, that while in stealth-mode, decided the technology they were building was just too dang cool to keep quiet about.

This month we explore the evolution of the iPod from the inside out with our Lumafield Neptune CT scanner, guided by none other than Tony Fadell, the inventor of the iPod and the founder of Nest […]

Because the iPod engineering team had only eight months to pull the design together, the early prototypes left lots of room for optimization. Our CT scan shows just how much empty space is left inside its enclosure. Steve Jobs famously dunked one in an aquarium, pointing to the air bubbles rising from the device to show that it could get smaller.

The scans explore the original iPod, a 6th-gen iPod Classic, and a 1st-gen iPod Nano. You can watch the video here.