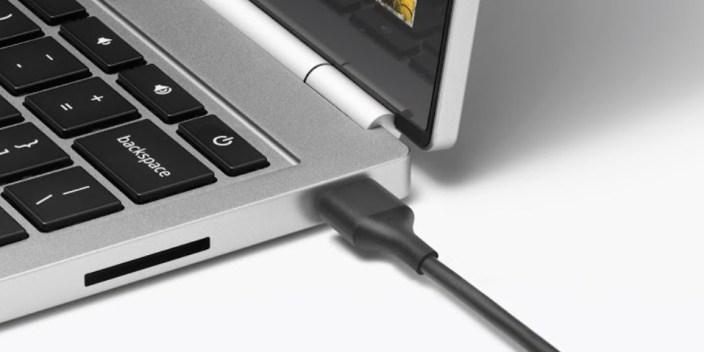 Coinciding with today’s announcement of the dual USB-C port-equipped Chromebook Pixel 2 laptop, Google and Belkin today announced separate collections of new USB-C cables and adapters. These new options go well beyond Apple’s upcoming USB-C accessory lineup for the 12″ MacBook, while also including some familiar options at lower-than-Apple prices. They’re amongst the first USB-C accessories to be announced by major manufacturers, as inexpensive USB-C cables from smaller companies are beginning to make their way onto Amazon for pre-order…

END_OF_DOCUMENT_TOKEN_TO_BE_REPLACED

Alongside the newly-announced 12″ MacBook, Apple today announced its first collection of USB-C accessories designed to expand the abilities of the ultra-thin laptop’s single data and power port. The smallest is a USB-C to USB Adapter ($19), which converts the MacBook’s USB-C port to standard USB “to connect devices such as your flash drive or camera” or “a “USB cable for syncing and charging your iPhone, iPad, or iPod.” It supports USB 3.1 Gen 1 for data… END_OF_DOCUMENT_TOKEN_TO_BE_REPLACED Some Mac users, specifically those with Macs that don’t support Bluetooth LE, weren’t too happy to find out that meant they would likely not get to use Apple’s new Handoff feature to seamlessly switch between apps across Macs and iOS devices.  To be clear, Apple has not yet confirmed details of device compatibility for most Yosemite features, but some users have reported that only Mid 2011 MacBook Airs, Mid 2012 MacBook Pros, late 2012 iMacs, and 2013 Mac Pro or newer models– the Macs that include Bluetooth LE– appear to support the feature. We’ve learned from people with knowledge of the matter that Apple is still testing the feature and yet to finalize which Macs will be capable of supporting it. END_OF_DOCUMENT_TOKEN_TO_BE_REPLACED